Governor Cuomo has been a national leader in championing LGBTQ rights. In 2011, he led the historic charge to make New York State the first large state to pass marriage equality. Since then, Governor Cuomo has continued to lead the nation in advocating for LGBTQ rights – signing the Gender Expression Non-Discrimination Act, banning conversion therapy based on gender identity or sexual orientation, and prohibiting the use of "gay and transgender panic" as a legal defense in courts.

Meanwhile, the federal government has pursued a series of attacks on the LGBTQ community, dismantling years of civil rights progress and rolling back protections for LGBTQ individuals. Across the country, LGBTQ people still face discrimination, harassment, and violence simply for being who they are. New York State refuses to let that stand. Under Governor Cuomo's leadership, we will continue to fight to ensure that all New Yorkers, regardless of gender identity or sexual orientation, can live with the dignity and equality they deserve. The FY 2021 Enacted Budget legalizes gestational surrogacy in New York State once and for all, helping LGBTQ couples and couples struggling with infertility.

Details of the New Law 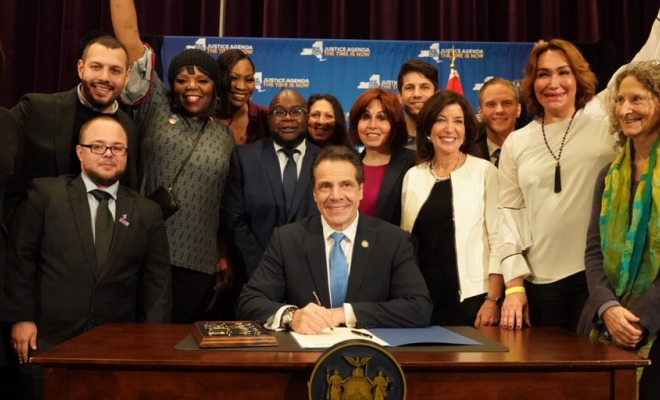 On the one year anniversary of the Gender Expression Non-Discrimination Act (GENDA), which added gender identity and gender expression as protected categories in New York State’s Human Rights Law, Governor Cuomo kicked off a statewide public awareness campaign to ensure that all New Yorkers know their rights under the law.

Know Your Rights File a Complaint

Standing Up to the Federal Government

The federal government's proposal to expand the definition of "religious exemptions" would give federal contractors license to discriminate.

Guide to Getting Care Learn More

The Restoration of Honor Act gives veterans who were denied an honorable discharge because of their sexual orientation or gender identity the right to apply to have their benefits restored.

Governor Cuomo signed legislation prohibiting NYS courts from denying child adoptions to petitioners who are already a legally-recognized parent solely on that basis.