TOP On WorldPride and 50th Anniversary of Stonewall...
Share

Governor Andrew M. Cuomo today signed into law legislation banning the gay and trans panic legal defense (S6573/A8375), fulfilling his pledge to ensure nobody uses this abhorrent legal defense strategy in the State of New York. The Governor signed the measure, a key component of his 2019 Justice Agenda, on WorldPride and the 50th anniversary of the Stonewall uprising. The Governor also vowed to double down next legislative session on his campaign to legalize gestational surrogacy, which the Assembly failed to take up this year.

"The gay and trans panic defense is essentially a codification of homophobia and transphobia, and it is repugnant to our values of equality and inclusion," Governor Cuomo said. "This defense strategy isn't just offensive - it also sends a dangerous message that violence toward LGBTQ people is somehow OK. It's not, and today we're sending this noxious legal tool to the dustbin of history where it belongs."

The Governor also released a new video for social media featuring Delores Nettles, the mother of Islan Nettles, a transgender woman who was brutally murdered in Harlem in 2013 and whose assailant used the gay and trans panic legal defense in court. Watch the video here.

The gay and trans panic defenses allow those accused of violent crimes against LGBTQ people to receive a lesser sentence, and in some cases, avoid conviction, by placing the blame on a victim's sexual orientation or gender identity. The passage of this bill would close a loophole in state law that currently allows individuals to use the gay and trans panic defenses after attacking another person based upon a perception, or discovery of, that victim's gender, gender identity, or sexual orientation.

Today we're sending this noxious legal tool to the dustbin of history where it belongs.

Senator Brad Hoylman said, "By banning the so-called gay and trans panic defense, New York is sending a message to prosecutors, defense attorneys, juries and judges that a victim's LGBTQ identity shouldn't be weaponized against them. I'm proud to be a member of a legislature that protects the rights of LGBTQ New Yorkers and thank Senate Majority Leader Stewart-Cousins and Assemblymember O'Donnell for their leadership on this critical issue. As we commemorate the 50th anniversary of Stonewall, I am extremely grateful to Governor Cuomo for signing this critical piece of legislation into law and look forward to continuing to work with him to make New York a more inclusive, equitable home for the LGBTQ community."

Assembly Member Danny O’Donnell said, “By banning Gay and Trans Panic Defense, we are sending the message that no one deserves to be targeted for violence because of who they are. At a time when far too many trans women of color and members of the LGBTQ community have been targets of violence and hate, we must continue to stand up and speak out to protect LGBTQ New Yorkers. As the first gay man elected to the New York State legislature, I know how hard we’ve fought for progress, and I thank the Governor, State Senator Brad Hoylman, and Speaker Heastie for their advocacy and partnership on this issue. From the Stonewall Riots to Marriage Equality, New York State has always been a leader in the fight for LGBTQ rights. I proud to be continuing that legacy with this law.”

Delores Nettles said, "In 2013, my daughter Islan was killed in Harlem for being who she was. Her attacker used the discriminatory 'trans panic' defense. I am so grateful that New York is banning this legislation so that no mother has to go through this again. We must keep fighting so that all trans people can live free from violence and discrimination. Thank you to Governor Cuomo for advocating tirelessly for this bill and for signing it into law today."

Ethan Rice, Senior Attorney, Fair Courts Project at Lambda Legal: "Banning the "gay and trans panic" defense in New York is an important and long overdue step toward treating the LGBTQ community equitably. LGBTQ people in New York should never have to experience violence. When it happens, LGBTQ people certainly should not be faced with blame for this violence. These "defenses" have no place in our justice system. Lambda Legal commends the Governor for signing this bill today and for his ongoing advocacy on behalf of the LGBTQ community."

Glennda Testone, Executive Director of NYC's LGBT Community Center said, "New York State government has taken another great step in the right direction, legally halting some enduring elements of homophobia and transphobia ingrained in our society. After establishing marriage equality, passing GENDA and ending conversion therapy in our state, Governor Cuomo showed that he is not done fighting for LGBTQ equality, and neither are we. We thank him for taking the gay and trans panic defense out of New York's court system and for his commitment to equal rights for all people."

Harlem Pride and The NYC Black and Latino LGBTQ Coalition said, "Using an individual's actual or perceived sexual orientation or gender as a defense for violent behavior is abhorrent and will not stand in the State of New York. We applaud Governor Cuomo for his leadership and dedication to protecting the LGBTQ community and closing the legal loophole keeping this archaic practice in place."

Guillermo Chacon, president of the Latino Commission on AIDS and founder of Hispanic Health Network said, "As we celebrate LGBT Pride and the 50th Anniversary of the Stonewall uprising we recognize that outlawing the gay and trans panic defense is long overdue in New York.  We appreciate that this legislation will be signed to ensure this can never happen again and that people impacted by homophobia and transphobia are no longer taking the blame for this antiquated loophole. We thank Governor Cuomo for advancing this important issue and I look forward to him signing this law to increase protections for the LGBTQ community."

Rod Townsend, Community Leader said, "A person's gender identity or sexual orientation is never a justifiable reason for violent attack, and Governor Cuomo closes the loophole in state law that allowed for it in cases of first degree murder today.  We look forward to seeing justice for individuals impacted by these crime and will fight to further limit the use of this appalling "blame the victim" strategy in cases of violence against LGBTQ people everywhere."

Amanda Babine, Director of Policy & Programs at the New York Transgender Advocacy Group said, "Banning the 'gay and trans panic' defense was a huge win for the LGBTQI community, especially for our Transgender, Gender-Non-Conforming, & Non-Binary siblings. This year alone, ten Transgender women of color have been found dead, one right here in New York. The New York Transgender Advocacy Group stands with pride next to Governor Cuomo as he continues to be a champion for the LGBTQI community here in New York State." 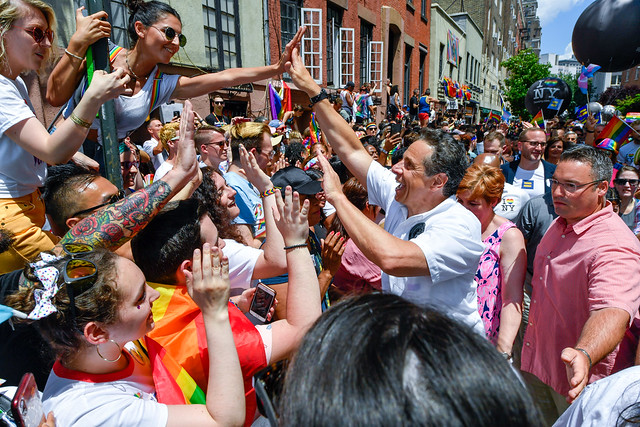 Brooke Malloy, Executive Director, Rockland County Pride Center said, "New Yorkers do not tolerate hate. We are a state of love and inclusion, and hold firm to our belief in equality for every person. The fact that there ever was a legal defense for crimes committed against the LGBTQ community, specifically based on their actual or perceived gender identity or sexual orientation is disgusting. Thank you to Governor Cuomo for his leadership in ending this abhorrent law, and for always speaking up and protecting LGBTQ New Yorkers."

Kelly Metzgar, Executive Director, Adirondack North Country Gender Alliance said, "New York State prides itself on being an inclusive, progressive state, where every person can feel safe and welcome. With his work to end the gay and trans panic defense, Governor Cuomo continues to ensure that everyone, regardless of their sexual orientation or gender identity, receives equal protection under New York State law. I wish to personally thank Governor Cuomo, on behalf of residents in the Adirondack North Country for his relentless work to defend the rights of all who call this beautiful state our home."

Christopher Goodwin, Supervisor of The MOCHA Center Rochester said, "We at The MOCHA Center and Trillium Health applaud Governor Cuomo for taking swift, progressive action to protect and uphold the rights of LGBTQ New Yorkers. Thanks to his efforts, a dangerous loophole rooted in hate has been erased from our criminal justice system. The gay and trans panic defense should never have been allowed. LGBTQ New Yorkers are grateful that we can now feel safer knowing that we are one step closer to having our lives equally valued and represented under the law."

Jeff Rindler, Executive Director, Hudson Valley LGBTQ Community Center said, "This revision to our legal system has been long overdue. The human rights of LGBTQ New Yorkers are non-negotiable, and now this hateful excuse will no longer be a permissible defense for homophobic and transphobic hate crimes, which are on the rise. For transgender women of color who experience higher rates of violence, this law is the next step in solidifying protections for our community. I applaud and thank Governor Cuomo and all the advocates and legislators who worked tirelessly to pass this legislation."

Kelsey Louie, CEO, GMHC said, "The beginning of the Stonewall rebellion was in New York City and it was in reaction to hate-fueled actions. Fifty years have passed since the beginning of our LGBT rights movement and New York has been a model for LGBT equality, setting a national standard that the rest of the country must follow. We thank Governor Cuomo for closing a loophole which permitted the murder of gay and trans New Yorkers due to their perceived sexual orientation or gender identity. This ensures that justice will be served for LGBTQ New Yorkers who are the victims of homophobia and transphobia."

Kristen Prata Browde, Board President, LGBT Bar Association of Greater New York and Co-Chair Board of Directors, National Trans Bar Association said, "This shows the kind of change that good government can and should bring. Banning the trans and gay panic defense is a huge step towards equality for LGBTQ New Yorkers. Governor Cuomo not only recognized the absurdity of giving someone a lesser sentence or even a pass after murdering someone based on their sexual orientation or gender identity, he fought hard for the ban. As the Governor signs the bill he is once again showing that New York truly is a beacon to the world and to every LGBTQ person."