Deployments Made at Fire Island Reef and Six Other Reefs Will Continue the State's Efforts to Provide New Marine Habitat, Promote Biodiversity and Restore Fishery Resources

"New York State is doing more than any state in the United States when it comes to climate change and protecting the environment," Governor Cuomo said. "Reefs are great for the environment and the economy, and the new reefs created under our comprehensive artificial reef program are already incredibly successful. We are going to continue this success by bolstering the Fire Island reef with an assortment of material, and show that New York, and Long Island in particular, can and will be the showcase to demonstrate how to build a green economy and a green environment for the rest of the nation."

As directed by Governor Cuomo in April 2018, and with unprecedented, multi-agency coordination, recycled materials from the State Department of Transportation (DOT), New York Power Authority (NYPA)/Canal Corporation and the Thruway Authority, among other partners, are being put to new use and helping to develop New York's artificial reef sites.

The 744-acre Fire Island reef, located two miles from shore with a depth of 62-73 feet, is the most recent recipient of materials that include:

From the U.S. Army Corps of Engineers:

New York State is going more than any state in the United States when it comes to climate change and protecting the environment.

Materials deployed on the Fire Island Reef in 2018, included:

Marine biologists have documented the rapid colonization of marine life, including sponges, mussels, bryozoans, barnacles and anemones, of deployed material and reef-associated finfish, such as blackfish/tautog, black sea bass and scup/porgy, on materials deployed under the Governor's Artificial Reef Initiative in the last year. State University of Stony Brook Southampton Professor Brad Peterson is conducting underwater growth research on the newly deployed reef material on Shinnecock Reef, helping to advance the science and understanding of reefs and the benefits they provide to the ecosystem.

Monitoring surveys conducted by DEC's artificial reef program have documented an increase in angler activity on the reef sites since the Reef Initiative started in 2018. A survey completed in August 2018 documented an all-time high vessel count on the reef sites of 369 vessels in a single day, three times higher than the prior daily high vessel count. In addition, an increased number of divers have been visiting the artificial reefs exploring newly added Canal Corporation vessels and Tappan Zee Bridge materials. Local dive charters used by Long Island dive clubs have added the Tugboat Reliable and Tender 6 on Shinnecock Reef to their dive charter destination calendar.

Construction of New York's first artificial reef dates back to 1949, and this latest initiative marks the State's first coordinated effort to stimulate the full environmental and economic benefits of artificial reefs. The artificial reef expansion will increase the biodiversity of habitats for a variety of fish and crustacea, promote biodiversity and environmental sustainability and boost New York's recreational fishing, sport fishing and diving industries. Materials used for the reef expansion are being strategically placed and built out of hard, durable structures such as rock, concrete and steel pipes, and usually in the form of surplus or scrap materials that are cleaned of contaminants to mitigate potential impacts to sea life before being recycled on the reef sites. Once materials and vessels settle to the sea floor - larger fish like blackfish, black seabass, cod and summer flounder - move in to build habitats within the new structures, and encrusting organisms such as barnacles, sponges, anemones, corals and mussels cling to and cover the material. Over time, these recycled structures will create a habitat similar to a natural reef. 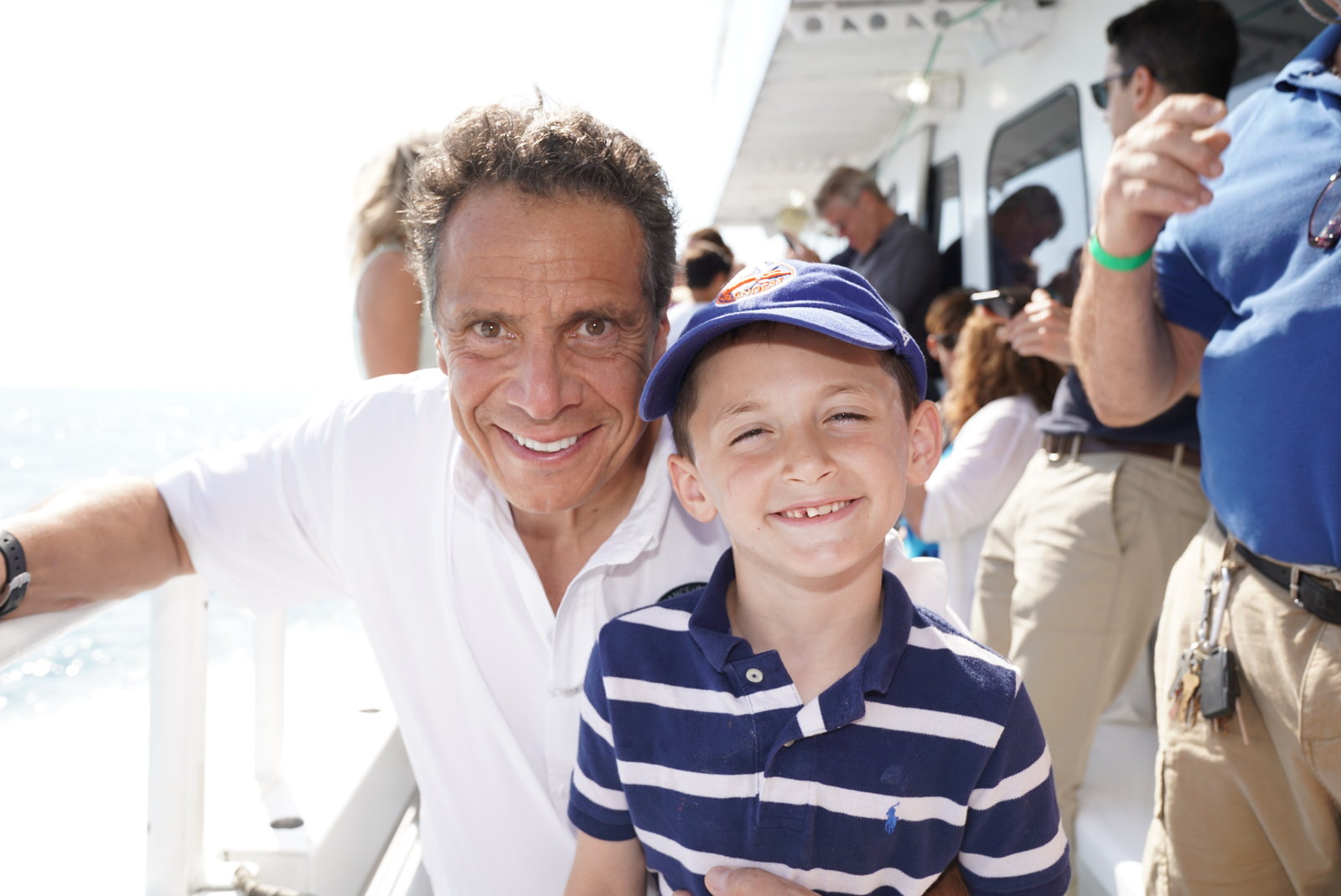 Colonel Tom Asbery, Commander of the US Army Corps of Engineers New York District said, "The MV Hudson now embarks on its second career and will continue in service to the Nation by creating marine habitat and providing recreational opportunities for fishing and diving. I am very proud of the state and federal teamwork and initiative that allowed us to decommission an iconic vessel of our fleet after 56 years of service, and to use it for public benefit in lieu of it being recycled for scrap metal."

Department of Environmental Conservation Commissioner BasilSeggos said, "Governor Cuomo's innovative approach to expand New York's network of artificial reefs is a visionary plan that will create healthier, more vibrant and diverse aquatic ecosystems while bolstering the economies of New York's coastal communities. Today's addition of material to Fire Island Reef will provide new habitat for countless marine species, increase recreational opportunities for the region's sport fishing and diving industries and is the latest example of the Governor's recognition that our environment and economy are inextricably linked."

New York State Department of Transportation Commissioner Marie Therese Dominguez said, "Protecting the environment and promoting the state's economy are at the heart of everything we do at New York State Department of Transportation and we are proud to be a part of Governor Cuomo's innovative Artificial Reef Initiative. The materials from our Kew Gardens and Kosciuszko bridge projects will help to promote a diverse marine ecosystem, provide increased recreational opportunities and promote tourism. This is not only good for the environment but it'ssound transportation policy as well."

NYPA President and CEO Gil C.Quiniones said, "The New York Power Authority and Canal Corporation are proud to play a role in Governor Cuomo's continuing expansion of artificial reefs off the shores of Long Island. This innovative repurposing of waste materials will revitalize a key coastal resource and enhance the waterways that help sustain fishing, recreational diving and tourism. New York State once again shows its national leadership in the promotion of environmental sustainability and economic development."

Canal Corporation Director Brian U. Stratton said, "We are happy that these materials, which were important parts of the New York State canals' infrastructure, can be put to good use one more time. Enhancing fisheries and promoting new sources of recreation are core to our mission."

Thruway Authority Executive Director Matthew J. Driscoll said, "The old Tappan Zee Bridge was given new life last year when its steel and concrete were recycled and reused for the Fire Island Reef and other artificial reefs off of the coasts of Long Island. Today's deployment expands this important marine initiative. Governor Cuomo recognizes that state entities working together to employ creative solutions is good for both economic development and environmental protection."

Senator Todd Kaminsky, Chairman of the Senate Environmental Conservation Committee said, "Placing artificial reefs off Long Island was an innovative and game changing idea that has brought a new home and place to grow for the fish in our area. I thank Governor Cuomo, the Department of Environmental Conservation, and my colleagues in State government for the sustained investment and expansion of these reefs."

Assembly Member Steve Englebright said, "Off Long Island, the floor of our harbor and ocean waters is made primarily of sand and other loose sediments. Under the sea, a solid surface on which a marine plant or animal can grow is at a premium. That's why creating reefs by reusing steel from old bridges and other clean decommission structures can create biodiverse marine habitats that provide high quality fishing grounds. II commend Governor Cuomo for his initiative to create new habitat for marine life through the reuse of steel and other materials."

New York's marine resources are critical to the state's economy, supporting nearly 350,000 jobs and generating billions of dollars through tourism, fishing and other industries. More than 500,000 anglers in the region will reap the benefits of this initiative, supporting the region's growing marine economy which accounts for approximately 9.7 percent of Long Island's total GDP.

New York's artificial reef program is just one example of the Governor's commitment to restoring marine ecosystems and economy. Coupled with the largest offshore wind agreement, record investments in the Environmental Protection Fund and Clean Water Infrastructure Act, a ban on offshore drilling, passage of the 'bunker bill' to prohibit the use of purse seines to protect this keystone species, continued progress Long Island Shellfish Restoration initiative, and many other programs to protect and improve water quality, the Governor's efforts are realizing a cleaner and healthier marine environment for all New Yorkers.

Artificial reef construction is part of Governor Cuomo's NY Open for Fishing and Hunting Initiative, an effort to improve recreational activities for in-state and out-of-state sportsmen and sportswomen and to boost tourism opportunities throughout the state. Visit DEC's website for more information about the artificial reef program.

Numerous events are set for the anniversary weekend at the 2,413-acre park, located on a barrier island with more than six miles of sandy beaches on the Atlantic Ocean. Designed by Robert Moses, the park has been on the National Register of Historic Places since 2005 and currently draws more than six million visitors a year.

Events include: a food truck village, inflatables for children, actors in period costumes strolling the boardwalk; lawn games; and self-photo stations will be set up featuring picture cut-outs of amusing Jones Beach park staff uniforms of the past.

On Aug. 4, the normal $10 parking charge will drop to 50 cents, reflecting the weekend fee the year that Jones Beach opened. That day, a 400-pound birthday cake will be cut and pieces handed out starting 11 a.m. in the Central Mall. Afterward, 9,990 free cupcakes will be handed out throughout the park.