Governor Cuomo: "And I pledge the residents of NYCHA, this hand will not sign the state budget unless there is a real remedy that is going to make the repairs at NYCHA and make them in real time."

Earlier today, Governor Andrew M. Cuomo held a press briefing at NYCHA -- Forest Houses in the Bronx where he pledged not to sign the budget if it doesn't include real remedies for NYCHA.

Last week, Governor Cuomo announced an additional $250 million investment to deliver quality living conditions to NYCHA contingent on the selection of an independent construction manager at the request of the tenants. Although the state has no legal obligation to fund NYCHA, it has already committed a record $300 million to the Authority. This investment will support improvements needed at NYCHA buildings, including securing heat and hot water for families that have gone weeks without these necessities, and the removal of decades-old mold and lead paint. The budget is due April 1.

"And I pledge the residents of NYCHA, this hand will not sign the state budget unless there is a real remedy that is going to make the repairs at NYCHA and make them in real time."

A rush transcript of Governor Cuomo's remarks is available below.

Governor Cuomo: Thank you. I would like to say it's my pleasure to be here today, but it's not. The conditions we saw once again are just disgusting. And they're intolerable. And it's uninhabitable. If New Yorkers saw the conditions that were in NYCHA units, they would all be disgusted.

I want to thank Georgia Winston, the counsel who's representing the tenants. I think she's doing a great job. I'm sorry that they needed an attorney, it's not the way the system is supposed to work, but they do. Alberto Pizarro, I want to thank him for his kind words and his good work. He's a good son. He takes care of his mother. And his mother is very proud of the work he's doing. We're proud that he's a member of Local 3, which is a great New York union. And it's a pleasure to be with Council Member Ritchie Torres who has the courage of his convictions, and he is here to actually get something done.

Once again, on behalf of the people of the State of New York, I apologize to NYCHA residents for the squalor and the conditions of NYCHA housing. I am sure any New Yorker who walked through these units that I have seen would be similarly disgusted. I was speaking with Alberto's mother and she's form Puerto Rico and we were talking about the storm that happened in Puerto Rico and she has family in Puerto Rico and I told her I spent a lot of time in Puerto Rico after the storm and the damage was terrible, and New Yorkers responded. We donated all sorts of goods, etc.

This is a failure of the political system and it's a failure of the justice system. The attorney for the tenants is right. This is a civil rights abuse. You had a federal judge order NYCHA to do the repairs years ago and nothing has happened. If this was a private landlord violating a federal order, they would be in jail today. The government should have been better. We now have in Albany, we're coming down to the last week of negotiation of the budget, which is the main piece of legislation that we'll do during the year, and I have a five-point civil rights agenda, because this is a civil rights abuse.

You have schools in this community that are basically serving poor minorities, we have to make sure those schools get the funds they need to educate those children. We don't even know how we allocate education funding among schools. There are 1,600 schools in New York. You don't even know how much money goes to the poor minority schools versus the rich, high performing schools. And the money should follow the need, which means helping those poor low performing schools.

You have a bail system which is a civil rights abuse, where bail is determined by how much money you have in your pocket and favors the wealthy, when Lady Justice is supposed to be deciding the merits.

President Trump says he wants to make America great again? President Trump should go back to Puerto Rico and tell me did he make Puerto Rico great again? Let President Trump come and visit these houses and let him tell me, that he made American great again. It's also a responsibility of the local government and they have to understand what the tenants are saying to them over and over and over again, which is that NYCHA is incompetent to do the work and make the repairs. It can't take four years to fix a boiler and a heating system. You can't say to the NYCHA tenants "Don't worry. Heat is going to be back in four years." You can't say it's going to take us four years to get the mold out of your apartment. It's going to take us four years to get the lead out of your apartment. Lead poisoning is a life sentence. A child gets lead poisoning, it can literally disable them the rest of their life. NYCHA has been ordered to do the lead paint abatement and they said they can't do it.

It doesn't matter how much money you pour into NYCHA, when NYCHA is incompetent to literally spend the money. It's a game, it's a rouse that the politicians are playing. What is a common denominator between the schools in these areas, between the bail and justice, between Rikers Island, and between the residents of NYCHA? They are all poor minorities. Do you think for one minute, if the tenants of NYCHA were powerful and wealthy, the city would be saying, it's going to take us four years to change a boiler? Do you think that would be the response? Do you think if it was the children of the privileged who were sitting in these school classrooms, you wouldn't know exactly how much money the school was getting? And they wouldn't be pounding City Hall to make sure they get their fair share?

You think if it was the children of the wealthy in Rikers Island the City would say 10 years to replace Rikers and everybody would say okay. That's why it's a pervasive civil rights abuse. It is discrimination, pure and simple. Now I need the help of the tenants of NYCHA. They need to speak up. They have an attorney. But they also have a voice. I need you to tell the politicians enough is enough. Enough with the speeches. Enough with the talk. They demand action. I need you to say to your City Councilperson, "I don't want to hear any more words. I want to see results." I want you to call your Assemblyperson and say "I need you to do something about it." I need you to call your State Senator and say "I want results." Government is about results. It's not about speeches. It's not about symbolism. It's about improving people's lives. And politicians have been pandering to the people of NYCHA for years. And the heat's still not on and the hot water is still not on and the mold is still there and the elevator still doesn't work. The politicians have to be held accountable.

John 3:18 says "Let us love not in words or talk but in deed and truth." And we have to say to the politicians, I want results. I've heard all the promises when you needed our votes. Now I need actual results. I pledge to the people of NYCHA this: I'm going back to Albany. I'm going to fight for the five-point civil rights agenda. I'm going to fight for $250 million more for NYCHA improvements. $250 more if we get it plus the $300 million the state already committed. That's $550 million, that's more than the City just committed. But Georgia Winston, the attorney, is exactly right. It doesn't matter how much money you pour into NYCHA if they are incompetent with how it's spent. It's like pouring more and more water through a pipe with a hole in it. It's accomplishing absolutely nothing. We need a professional company to come in here and do these repairs and do it in real time. And that's what I'm going to demand from the politicians in Albany. I want in the budget and I want it done now. And I pledge the residents of NYCHA, this hand will not sign the state budget unless there is a real remedy that is going to make the repairs at NYCHA and make them in real time. No more talking. No more bureaucracy. No more politicians covering the rear end of other politicians. It's time to get results for the tenants of NYCHA. Thank you. 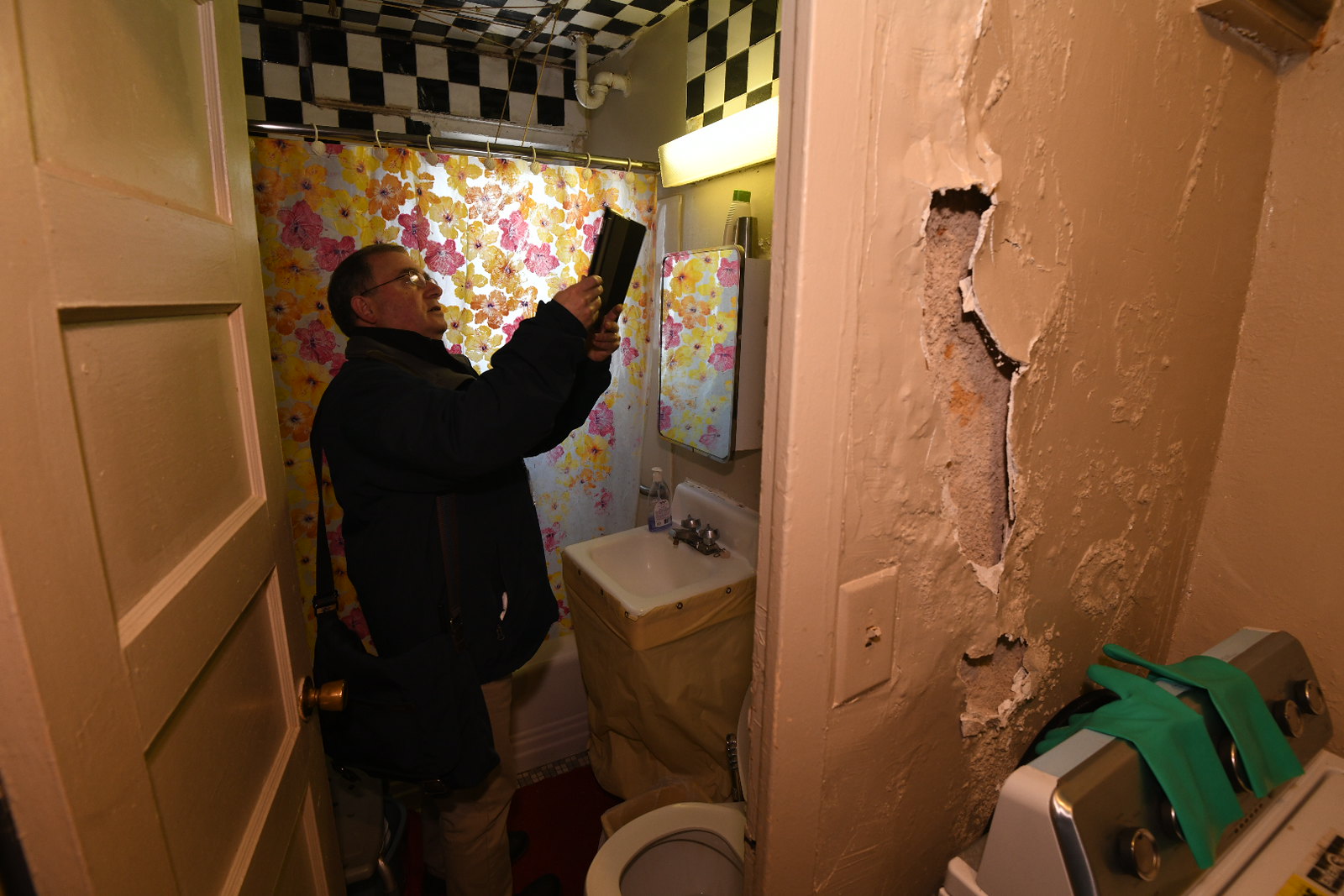