Both Proposals Were Advanced as Part of Governor's Executive Budget

Governor Andrew M. Cuomo today announced TIME'S UP has joined his campaign to repeal the statute of limitations for rape in the second and third Degrees and enact additional sexual harassment protections before the end of the legislative session on June 19. Both bills were proposed in the Governor's FY 2020 Executive Budget but were not adopted by the legislature, leaving them to be considered outside of the budget during the remainder of the legislative session.

"We have a moment in time today to recognize two major problems have existed. First, there has been an ongoing, persistent culture of abuse of women in terms of sexual harassment, assault, discrimination. Second, the statute of limitations for rape in the second and third Degrees is only five years. There should be no statute of limitations for rape in the second and third degrees, but five years is an abject dereliction of justice," Governor Cuomo said. "These changes have to be made now. We pride ourselves on being the progressive capital of the nation. Let's do it here again in the name of women's rights and women's justice, and let's honor all the women who have suffered this pain and endured this humiliation. Let's honor the women who have had the courage to come forward and tell their story, even though it was personally hard and difficult. And let's actually change things because that's all that matters at the end of the day."

"We must continue to fight to change the culture and create a safe environment for women," said Lieutenant Governor Kathy Hochul. "In New York, we are taking important steps to further combat sexual harassment and implement protections for women against violence and rape. We're building on our partnership with TIME'S UP to prevent sexual harassment and assault and enabling victims to seek justice. By the end of legislative session, it is our priority to repeal the statute of limitations for rape and eliminate the need for harassment to be 'severe or pervasive' to ensure the rights and protections of all women."

Eliminate the Statute of Limitations for Rape

Increase Protections Against Harassment in the Workplace

Building on the nation's most comprehensive sexual harassment package signed into law by Governor Cuomo in 2018, the Governor advanced legislation as part of the FY2020 Executive Budget to increase protections against sexual harassment in the workplace by eliminating the restriction that the harassment be "severe or pervasive," mandate that all pre-dispute non-disclosure agreements allow for filing a complaint, and require employers to conspicuously post a sexual harassment educational poster.

This builds on legislation enacted in the FY2019 Budget that expanded workplace protections in the State's Human Rights Law to include contractors, subcontractors, vendors, consultants, or others providing services in the workplace; required employers to adopt a sexual harassment prevention policy and training; and mandated that as of January 2019 all State contractors must submit an affirmation that they have a sexual harassment policy and that they provide annual training to all of their employees.

There should be no statute of limitations for rape in the second and third degrees, but five years is an abject dereliction of justice.

Robbie Kaplan, lawyer and co-founder of the TIME'S UP Legal Defense Fund, said, "We pride ourselves on being progressive. We talk about being progressive. Let's do it—let's actually be progressive...The legislature should act and get justice for the many many women who this happens to."

Mira Sorvino, actress and activist, TIME'S UP, said, "There has always been a power dynamic, a patriarchal abuse of women through many means, but largely sexual. And we may be on the cusp of the change that forever, for all the daughters to come, for all the future generations, they may not have to worry about these things we have endured our entire lives, as did our mothers, as did our grandmothers, as did our ancestors way back to the Neanderthal age. So I'm thrilled to see thought and passion turning into action. I've always said as an advocate - because I've been advocating for a long time both on women's rights and human trafficking with the United Nations for UNODC—that awareness without action is hollow, it's nothing. So I urge the legislature to pass these bills because this takes us to that next step into trying to change things on the ground."

Leslie Silva, actress and activist, TIME'S UP, and Carmen LoBue, actress, director and activist, TIME'S UP, said, "In the fall of 2017, thanks to the bravery of so many women who spoke out, including Mira Sorvino who is with us today, we began to learn of the widespread abuse and misbehavior that was happening to women of all kinds in workplaces across the across the globe. Since launching TIME'S UP, we've focused on creating solutions that will address change at every level in an effort to ensure that no woman will ever again feel alone. We thank Governor Cuomo for his leadership on pushing the New York Safety Agenda and for having us here today."

Laura Ladd Bierman, Executive Director, League of Women Voters of NYS said, "New York should have the strongest protections for women in the nation. In order to accomplish this it is paramount that the legislature answer the Governor's call and repeal the rape statute of limitations in the second and third degree and enact additional sexual harassment protections by the end of session. We thank Governor Cuomo for his leadership and continued support of girls and women everywhere." 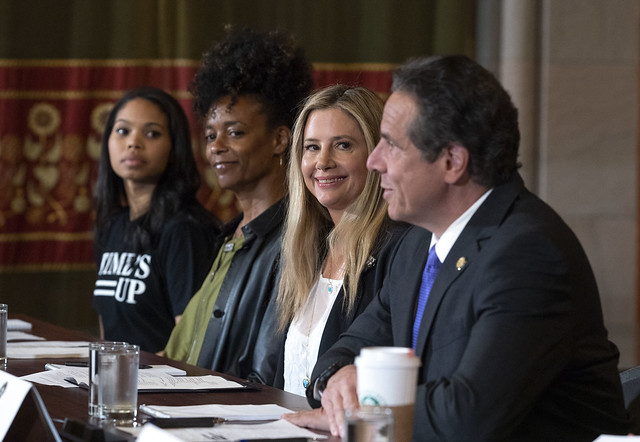 Connie Neal, Executive Director of the New York State Coalition Against Domestic Violence said, "We applaud the Governor's work to ensure justice for survivors of sexual harassment and sexual assault. Time's up! and the Legislature must take action now."

Selena Bennett-Chambers, Director of Public Policy, New York State Coalition Against Sexual Assault, said, "We applaud Governor Cuomo for his leadership on supporting survivors of sexual violence. Sexual assault and sexual harassment are widespread issues that impact people across every race, disability status, gender identity and a plethora of other factors. According to a National Survey 1 in 5 women and 1 in 71 men will be raped at some point in their lives. In addition recent statistics show that 70 percent of women suffer sexual harassment on the job. Furthermore a 2015 U.S. Transgender Survey found that 47% of transgender people are sexually assaulted at some point in their lifetime. This is unconscionable. We must expand protections, rights and options for survivors of sexual violence, including eliminating the statute of limitations for rape in the second and third degree and improving sexual harassment laws and protections. We must do all we can to support survivors, their families and our communities."

Kim Siciliano, Executive Director YWCA NorthEastern NY and YWCA's of NYS - Domestic Violence Issue Leader, said, "The women in this state and in this nation are starting a movement to speak up against abusers and pass protections for victims to ensure the epidemic of sexual abuse and harassment never happens again. New York has long been a leader in women's rights, and now Governor Cuomo is continuing that legacy with these ongoing efforts to repeal the rape statute of limitations and enact even stricter sexual harassment protections in the workplace. It is time for the legislature to act on these crucial issues and make it clear that there is no longer any place for this kind of reprehensible behavior in our state."