Governor Cuomo today signed into law legislation that expands equal pay laws to prohibit unequal pay on the basis of a protected class for all substantially similar work (S5248B/A8093A), and forbids employers from asking prospective employees about their salary history (S6549/A5308B). Governor Cuomo also called on U.S. Soccer to pay the women's national team the same as the men's national team. The Governor signed the measures, a key component of his 2019 Women's Justice Agenda, at the ticker-tape parade celebrating the world champion U.S. Women's Soccer Team. These actions build on common sense measures championed by the Governor this year, including rape shield protections for victims of sex trafficking, enhancing workplace sexual harassment laws and funding a community college program that will help single moms move out of poverty.

"There is no rationale why women should not get paid what men get paid. These are women's soccer players, they play the same game as the men's soccer players, and they play it better - so if there is any economic rationale, the men should get paid less than the women," Governor Cuomo said. "New York will continue to lead the way forward and stand in solidarity with women and girls in every corner of this state. By signing this legislation, we are not only doing the right thing, we are also doing the moral thing and equal pay for equal work is now the law in the State of New York."

"Countless women put their heart and soul into their jobs every day, and at the end of the day still earn less than men," said Lieutenant Governor Kathy Hochul. "Although New York has among the lowest gender wage gap in the nation, the gap still exists. That is unacceptable. The U.S. Women's Soccer Team brought home the win, and made our nation proud. Their victory magnified the disgraceful reality that U.S. Soccer does not pay the women's team the same as the men's team. We have made progress to ensure women's rights and protections, but we will not rest until women achieve full equality."

The legislation signed today prohibits all employers, public and private, who do business in New York State, from asking prospective employees about their salary history and compensation, and expands the definition of "equal pay for equal work." These measures build on two executive orders signed by the Governor last year to eliminate the wage gap by prohibiting state entities from evaluating candidates based on wage history and requiring state contractors to disclose data on the gender, race and ethnicity of employees - leveraging taxpayer dollars to drive transparency and advance pay equity statewide.

In 2017, the Governor directed the Department of Labor to issue a report on the gender pay gap in New York and provide recommendations to break the cycle of unfair, unequal compensation. After holding pay equity hearings across the state, the Department of Labor released its report last Spring. Acting immediately upon its recommendations, Governor Cuomo introduced a program bill to expand on his executive orders by instituting a salary history ban that prohibits all employers, public and private, who do business in New York from asking prospective employees about their salary history and compensation.

There is no rationale why women should not get paid what men get paid. 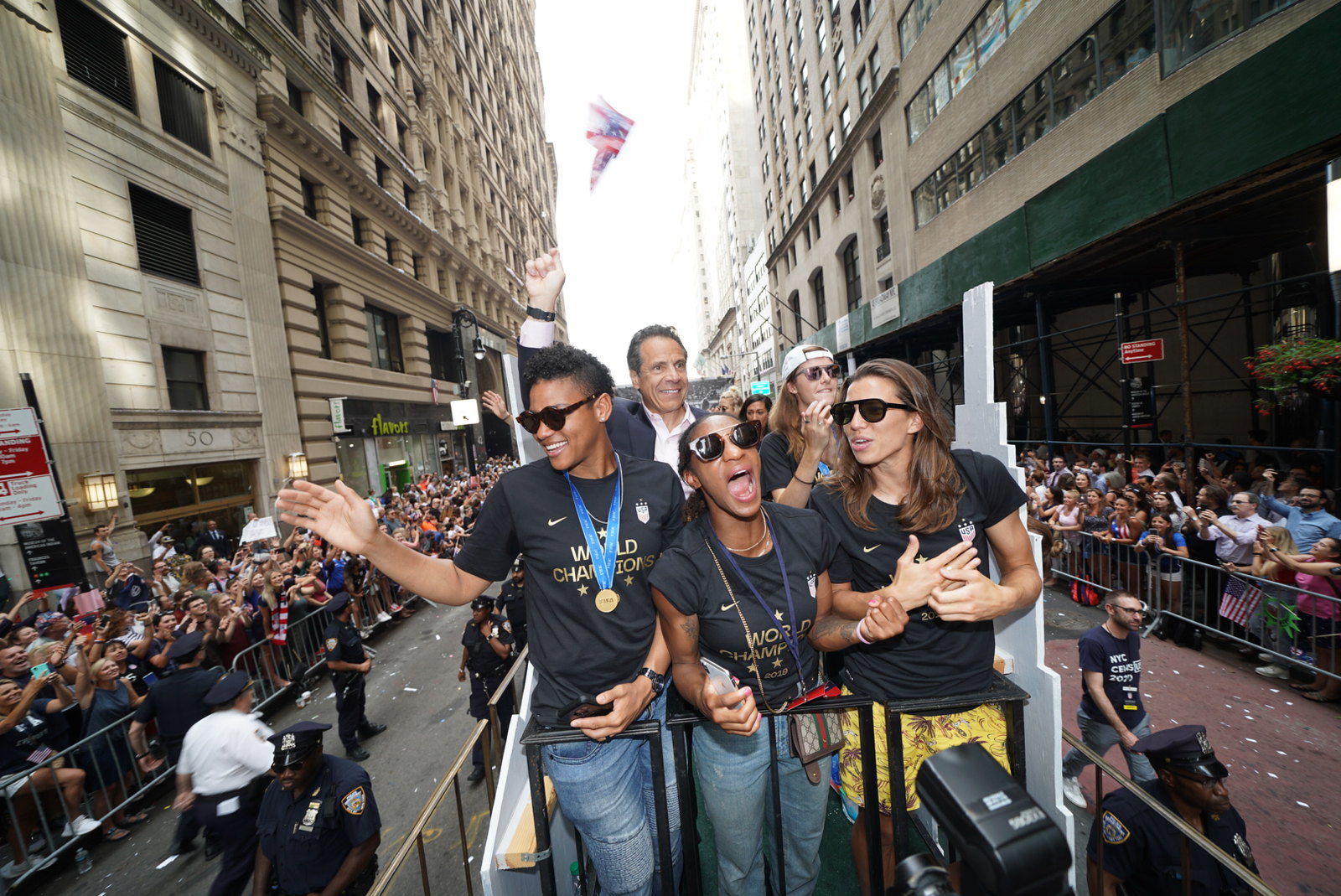 Senate Majority Leader Andrea Stewart-Cousins said, "As we honor the United States Women's National Soccer Team for its World Cup victory, we are reminded that these champions do not make the same that the U.S. Men's Team makes, despite winning back to back World Cup championships. The wage gap in New York is just as glaring with White women earning 89 cents to each dollar earned by men, a gap that is even more pronounced among women of color, with Black women earning 63 cents and Latinas earning 54 cents for every dollar. The bills signed into law today will right this wrong by protecting employees from wage discrimination and ending the practice of salary history requests. We are proud to lead the way in fighting for equal pay for equal work to build a stronger and fairer New York."

Assembly Speaker Carl Heastie said, "The Assembly Majority is committed to putting families first, and we know that means ensuring fair wages for every hardworking New Yorker. That is why we have fought for years to pass legislation to protect New Yorkers from unscrupulous practices that stifle wages and to ensure that women and all protected classes are paid fairly for their work. These bills address the root causes of continued wage inequality and are critical to enforcing existing laws regarding wage equality. It is long past time they become the law of the land in New York."

Senator Alessandra Biaggi said, "From soccer fields to board rooms, Americans across working sectors are standing up for their right to equal compensation and today New York is answering that call. Every New Yorker deserves equal pay for equal work regardless of race, sexual orientation, disability, or however they choose to identify. My bill serves to address the systemic issue of pay-discrimination plaguing marginalized communities by expanding our equal pay laws to prohibit pay-discrimination based on any protected-class status. I thank Senate Majority Leader Andrea Stewart-Cousins and Governor Andrew M. Cuomo for their fervent support on this issue - this is a first step towards closing the pervasive wage gap in New York State, and solidifying the principle of equal opportunity for all into law."

Senator David Carlucci said, "Women should not be making 80 cents or less for every dollar a man is paid for the same work. The first step in closing the gender pay gap is ending the salary history question so low salaries do not follow women throughout their career. Thank you to all the women who have stood up for equal pay and to the Governor for taking action to close the gender pay gap."

Assemblymember Marcos Crespo, Chair of the Assembly Committee on Labor, said, "For years I carried legislation to end the practice of asking for salary history as it served solely to underpay employees and perpetuate wage disparities against women and people of color. I am grateful that with the Leadership of Governor Cuomo, Speaker Heastie and Leader Stewart-Cousins, we made 'Pay Equity' a priority and once again become a progressive leader in achieving meaningful change and fair wages for those too long denied equal opportunities."

Assemblymember Karen McMahon said, "Despite our existing employment discrimination laws, pay disparity based on gender and other protected classes is still a problem in New York. This expansion of the Equal Pay Act protects more classes of workers, prohibits pay discrimination for substantially similar work, and will make a difference in people's' lives. I thank Governor Andrew Cuomo, Speaker Carl Heastie, and my Assembly colleagues for their hard work on this issue and this historic bill."