Governor Andrew M. Cuomo and Puerto Rico Governor Wanda Vázquez Garced today announced a new, integrated tourism partnership between New York State and Puerto Rico that will highlight popular attractions in both locations to drive visitation to both. Both Governors will direct state resources to promote reciprocal visitation to each destination over the next year. Governor Cuomo also announced that Chocolate Cortés, the leading chocolate manufacturer in the Caribbean and a longstanding Puerto Rican and Dominican brand, will expand in New York State with its restaurant concept Chocobar Cortés. The Governor made both announcements at the 2019 Somos Puerto Rico Conference in San Juan.

"New York maintains robust economic and cultural ties with Puerto Rico, and this new partnership will take advantage of all that the state and the island have to offer while bolstering both tourism industries through an integrated marketing campaign," Governor Cuomo said. "In the aftermath of Hurricane Maria, New York stood shoulder to shoulder with our brothers and sisters on the island and this new partnership is the latest example of our ongoing commitment to the people of Puerto Rico."

Governor Wanda Vázquez Garced said, "New York State has shown an unwavering commitment with Puerto Rico's recovery for the past two years. Today's announcement marks yet another milestone in the strong partnership between New York and Puerto Rico. We look forward to developing this mutually beneficial tourism marketing initiative, and are extremely grateful for the recovery and relief efforts which New York State has spearheaded in Puerto Rico."

Under Governor Cuomo's leadership, New York State tourism has reached new heights, welcoming a record 253 million travelers who spent nearly $72 billion in 2018. This has generated a record-breaking economic impact of more than $100 billion for five years in a row. As the state's third largest employer, leisure and hospitality supports more than 957,000 jobs, or one in 10 New York State jobs. Tourism represents 6 percent of Puerto Rico's GDP. Tourism is a $6 billion industry in Puerto Rico, supporting over 70,000 jobs.

Carlos Cortés, Director of Chocobar Cortés, said, "We are very excited to open in New York City our very first location of Chocobar Cortés outside of our flagship in Old San Juan. We have chosen the Bronx, home to one of the strongholds of the Puerto Rican and Dominican communities that grew up with our chocolate. We hope to inspire the city with the taste of our chocolate, the richness of our culture, and the warmth of the Caribbean."

Chocobar Cortés will open a chocolate restaurant, bar, and coffee shop in Mott Haven in New York City, called Chocobar NYC, which will create or support more than 100 jobs. Chocobar NYC is the first Puerto Rican business to open in the Bronx since Hurricane Maria, and its launch highlights the island's strong connection to New York State. The New York Empowerment Zone Corporation, a subsidiary of Empire State Development, has offered a $300,000 loan from the Bronx Overall Economic Development Corporation for this project. $100,000 will also be provided by the Bronx Initiative for Energy and the Environment, which is funded by the New York Power Authority (NYPA). Funding will be used for the purchase of energy-efficient machinery for the restaurant. Chocobar Cortés will launch in the summer of 2020. Chocolate Cortés is a 4th generation, bean-to-bar chocolate manufacturing company founded in 1929. It is headquartered in San Juan.

In the aftermath of Hurricane Maria, New York stood shoulder to shoulder with our brothers and sisters on the island and this new partnership is the latest example of our ongoing commitment to the people of Puerto Rico.

Rick Cotton, Executive Director Port Authority of New York and New Jersey said, "The abundance of direct flights to and from Puerto Rico through our airports allows for quick, easy access for travelers and is an economic asset to the region. We are proud to join this new initiative, do our part to help spur tourism, and continue to aid the island's recovery following Hurricane Maria."

MTA Chairman Pat Foye said, "The MTA is proud to partner on this campaign facilitated by the Governor. Many of our customers and employees have connections to Puerto Rico, so sharing tourism efforts is a great way to support this beautiful island as they continue to recover from devastation and to market tourism in New York." 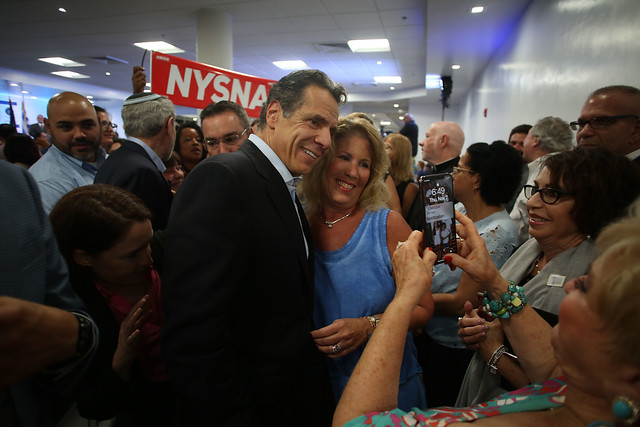 Since Hurricane Maria's landfall in September 2017, Governor Cuomo has traveled to Puerto Rico five times and has continuously directed critical resources to communities in need. In the immediate aftermath, New York established the Empire State Relief and Recovery Effort, ultimately distributing at least 4,400 pallets of supplies collected from 13 donations sites across the state. New York State also deployed more than 1,000 personnel, including hundreds of utility workers and power experts to help with power restoration and grid stabilization.

Under the Governor's leadership, New York State has dedicated approximately $13 million to support the more than 11,000 displaced Hurricane Maria victims living in New York. As part of the commitment, an initial investment of $2 million will go to partnering organizations who connect vulnerable Puerto Ricans to needed services such as employment, housing, benefits counseling and health care. Governor Cuomo has also committed up to $11 million dollars in housing and workforce funding for displaced Puerto Ricans: a $1 million program to provide robust case management services to displaced Puerto Ricans, and up to $10 million in job training and placement.

Governor Cuomo and the New York Congressional Delegation continue to advocate for Puerto Rico to receive essential federal assistance. In 2017, Governor Cuomo and Puerto Rico Governor Ricardo Rosselló, along with members of the New York Congressional Delegation, issued a Build Back Better Assessment Report. The report identified specific sectors needing investments, including housing, power grid and resiliency, agriculture, and others. Together with $487 million for public safety and first response aid and $9 billion for long-term recovery management, the total funding need is $94.4 billion.