At today's "No Hate. No Fear." Solidarity March in New York City, Governor Andrew M. Cuomo today announced an additional $45 million in funding is available to help protect New York's religious-based institutions, including non-public schools and cultural centers, against hate crimes. Funding is being made available through Requests for Applications under New York's Securing Communities Against Hate Crimes Grant Program. Created by Governor Cuomo in 2017, the program provides funding to strengthen security measures and prevent hate crimes against non-profit day care centers, community centers, cultural museums, day camps andnon-public schools,which may be vulnerable because of their ideology, beliefs or mission. Since the program's inception, more than 500 such projects have been supported by $25 million in state funding. The Governor also announced the creation of a new tip line that New Yorkers should call if they experience bias or discrimination - 1-877-NO-HATE-NY. Additionally, the Governor announced that State Police will continue increased patrols and security in Orthodox Jewish neighborhoods across the state.

"The recent rash of anti-Semitic and other hate-fueled attacks in New York and across the nation are understandably causing anxiety, but we will not be intimidated," Governor Cuomo said. "In New York we stand up to those who try to sow division and fear, and this new funding will provide religious and cultural institutions the support they need to help protect themselves and keep people safe. We will not let the cancer of hate and intolerance weaken us - we will continue to stand up and denounce it every time it rears its ugly head."

Hate crime statistics indicate a surge of anti-Semitism and hate crimes against the Jewish community, nationally and in New York. Nearly half of all hate crimes in New York over the last several years have been against the Jewish community. The October 27, 2018 mass shooting at the Tree of Life Synagogue in Pittsburgh and the recent terror attack at a kosher market in Jersey City, New Jersey, in which a local Yeshiva and Catholic school faced gunfire, underscore the need to protect Jewish institutions from violent extremism and anti-Semitism.

We will not let the cancer of hate and intolerance weaken us - we will continue to stand up and denounce it every time it rears its ugly head.

The grants, which will be directed by the New York State Division of the Budget, provide up to $50,000 in funding for additional security training, cameras, door-hardening, improved lighting, state-of-the-art technology and other related security upgrades at each eligible facility. Organizations that operate more than one facility have the opportunity to submit up to five applications. 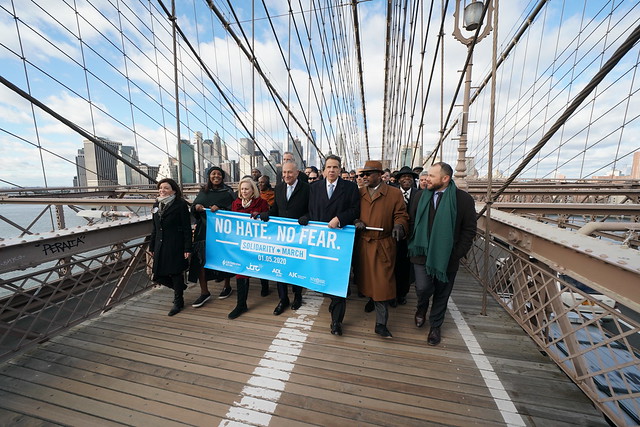 The program was announced in October 2017 by Governor Cuomo and is part of an extensive effort launched by the Governor to combat hate crimes in New York. The Hate Crimes Task Force was created last year to mitigate recent incidents of bias-motivated threats, harassment and violence in New York. As part of the Task Force, New York State Police, the Division of Human Rights and the Division of Criminal Justice Services engage local stakeholders and law enforcement agencies, and work to identify and investigate hate-motivated crimes and bias-related trends, community vulnerabilities and discriminatory practices.

Governor Cuomo has also established a telephone hotline and text line New Yorkers should call if they experience bias or discrimination. The phone number is 1-877-NO-HATE-NY and the hotline is open.