Expedited Project Completed in Exactly Six Months, One Month Ahead of Schedule

Governor Kathy Hochul today announced that the $80.1 million resurfacing project on the Long Island Expressway from the Nassau-Suffolk border to State Route 112 in Suffolk County is now complete. In April, the New York State Department of Transportation began work on this critical project, which was completed this morning, Thursday, October 20 - six months after initial work began and one month ahead of schedule. The Governor also announced that the major pavement renewal project on the Southern State Parkway in Nassau and Suffolk Counties is being completed this week. This year, more than 442 lane miles of state roads across Long Island have been repaved with new asphalt - totaling $121.6 million.

"Smoother roads are ahead with the ahead of schedule completion of this transformative repaving project for Long Islanders," Governor Hochul said. "We are putting historic infrastructure investments to work to repair our roads, pave our potholes, and deliver the quality, reliable infrastructure New Yorkers deserve."

In her inaugural State of the State Address this year, Governor Hochul made investing in New York's infrastructure and fighting the scourge of potholes across the state one of her highest priorities, allocating $1 billion over five years. Under a new program called Pave Our Potholes, $500 million was allocated for local roads and $500 million for state highways. The program, which was officially launched with the passage of the State Budget in April, has already allocated $111 million to pave more than 793 lane miles of state and local roads this fiscal year, with more requests for reimbursement still to come for work completed by localities across New York. This is in addition to other State programs, such as CHIPS, PAVE NY, State Touring Routes, and other programmed capital projects across the state.

Statewide from August 2021 through the end of 2022, more than 3,700 lane miles of roads have been or are expected to be resurfaced.

New York State Department of Transportation Commissioner Marie Therese Dominguez said, "In her years serving as both Lieutenant Governor and Governor, Kathy Hochul has driven thousands of miles of highways across the state, and she knows where every pothole is hiding. She also knows the value of investing in New York's critical infrastructure. Our state and contractor forces worked hard this year to fill as many potholes as they could through hundreds of resurfacing projects, including this large project on the Long Island Expressway that was completed early and under budget. While we have a lot to be proud of, we always have more work to do. With unwavering support from Governor Hochul, we'll be out there in force — maintaining our roads, completing our capital projects, and getting the infrastructure ready for New York's harsh winter months."

We are putting historic infrastructure investments to work to repair our roads, pave our potholes, and deliver the quality, reliable infrastructure New Yorkers deserve.

Paving crews began in the eastbound direction of the Long Island Expressway on Tuesday, April 19 at the Nassau and Suffolk County line near Exit 48 and proceeded to mill away the old pavement and place new asphalt along the Long Island Expressway's three main travel lanes, the High-Occupancy Vehicle (HOV) lane, shoulders, and 62 on/off ramps. Work then began in the westbound lanes from State Route 112 at Exit 64 towards the Nassau County border, which was just completed on October 20, completing over 286 lane miles total. The new, smoother asphalt riding surface, which is expected to last at least ten years, also includes new highly reflective pavement markings and rumble strips on the shoulders.

Governor Hochul also announced that Friday, October 21 will mark the completion of the third Southern State Parkway resurfacing project in the last two years, totaling over 121 lane miles.  The two latest sections of the Southern State Parkway completed this year—Grand Avenue/Baldwin Road (Exit 20) to State Route 110 (Exit 32) in Nassau County and State Route 231 (Exit 39) and the Sagtikos State Parkway (Exit 41A) in Suffolk County — will provide South Shore motorists with a smoother ride for commuting and leisurely traveling across Long Island.

Other major projects across Long Island

In August, Governor Hochul announced that six of ten locations slated for resurfacing this spring had been renewed, many ahead of schedule. Since then, two other projects have finished, including a resurfacing project on State Route 111 between the Long Island Expressway and Suffolk Avenue in the Town of Islip, as well as shoulder rehabilitation work on the Meadowbrook State Parkway between Merrick Road and Ocean Parkway in the Town of Hempstead.

Two pavement projects totaling $26.4 million, which began this spring, are proceeding and set for completion in 2023. The first includes full depth concrete repairs on 55 Southern State Parkway entrance and exit ramps in both Nassau and Suffolk Counties while the second includes pavement resurfacing with sidewalk ramp safety enhancements on State Route 109 between the Nassau/Suffolk border and State Route 27A in the Town of Babylon.

Additionally, a $7.3 million concrete restoration and repair project is underway between State Route 112 and Yaphank Avenue/Suffolk County Route 21 (Exits 64 to 67) in the Town of Brookhaven. Scheduled for completion in the spring of 2024, the concrete riding surface will be renewed with diamond grinding the pavement to remove imperfections and replacing deteriorated sections of concrete where necessary.

And earlier this year, Governor Hochul announced the most transformative project on the Long Island Expressway in recent memory with the reconstruction of Exit 53 to add access ramps to Crooked Hill Road (Suffolk County Route 13), improving mobility for motorists while bolstering the local economy. 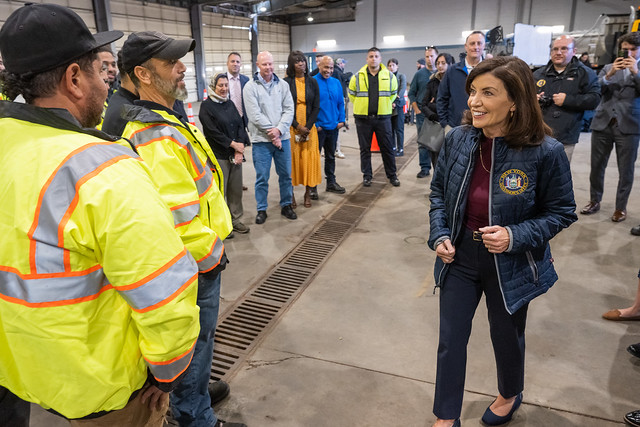 Assemblymember Taylor Darling said, "Driving over potholes and damaged roads are a costly, inconvenient experience everywhere but especially here on Long Island, where so many of us depend on our vehicles to go to provide for and take care of our families. For so many of my constituents, repairing tires and cars as a result of hitting a pothole can mean they will not have enough money to pay their mortgage, rent or even feed their families. I shared this massive concern with Governor Hochul several months ago — ironically while I was at a Firestone purchasing a new tire because I hit a pothole — and she already had the plan in motion to spend 1 billion dollars in a historic road replacement and repair initiative. Currently, over 400 lane miles of the LIE and Southern State have been replaced and repaired, and LONG ISLAND IS SO GRATEFUL.  My constituents comment on the vast improvement in their driving experiences and the money in their pockets because they are not bombarded with the unforeseen costs that are associated with hitting a pothole. Thank you to our incredible men and women at the Department of Transportation who work so hard every day to ensure we have safe and reliable roads.  Thank you Governor Hochul for your commitment and urgency to resolving our massive pothole issue."

Assemblymember Steve Stern said, "Completion of the Long Island Expressway Pavement Renewal Project is welcome news to all of us. Infrastructure investments and road repairs are critically important to both our local economy, the safety of our motorists and our quality of life. As Long Islanders know all too well, potholes are a dangerous and costly part of our daily commutes. I applaud Governor Hochul on the completion of this important project, on-time and under budget, which will go a long way toward preventing damages to our vehicles and easing the stress of our commutes on Long Island."

Suffolk County Executive Steve Bellone said, “There is no greater investment, than an investment in our infrastructure. Not only has the Long Island Expressway resurfacing project been completed, it has been completed ahead of schedule and under budget. I would like to thank Governor Kathy Hochul for her continued efforts to improve the quality of life for all Long Islanders, and that includes those who use the LIE each day who will now have a much smoother trip.”

Motorists are urged to plan accordingly and drive responsibly in work zones.  Fines are doubled for speeding in a work zone.  Convictions of two or more speeding violations in a work zone could result in the suspension of an individual's driver license.