Governor Hosts Second of Three Summits across the State to Educate Teachers, School Administrators and Parent Representatives on New Gun Safety Law - New Website Provides Information About How and When to File Extreme Risk Protection Orders

Following the second in a series of conferences to raise awareness about the state's Red Flag gun safety law that went into effect this year, Governor Andrew M. Cuomo today launched a grassroots effort to bolster his "Make America Safer" campaign -- a four point plan to curb gun violence on the national level. The Governor has called on Democratic presidential candidates to endorse the "Make America Safer" pledge -- and today Everytown for Gun Safety, Moms Demand Action and March for Our Lives joined the Governor's call for candidates to sign the pledge.

The social media campaign will focus on engaging and activating key coalition partners, advocates and concerned citizens who support the Make America Safer Pledge to help generate greater awareness and insert these important issues into the national dialogue about gun safety, while tracking their efforts across various social media platforms. These combined efforts will help accomplish the common-sense gun safety measures included in the "Make America Safer" campaign on the national level.

"As the federal government continues to abdicate its responsibility to protect the people in this country by failing to take action on meaningful, common sense gun control, it is now more important than ever to have a leader in Washington that has a plan to tackle these issues and end this violence once and for all," Governor Cuomo said. "That is why I'm asking all Democrats running for president to make a simple, clear choice for the American people and sign the "Make America Safer Pledge." New York State passed these laws six years ago and they have worked. No legal gun owners' rights have been violated, but unnecessary, dangerous weapons are off the streets and dangerously mentally ill people cannot by guns. We were the laboratory, and now it must be done on the national level. And if a candidate can't support this pledge, I don't believe they should be running for president as a Democrat."

Following the horrific mass shootings in El Paso, Texas and Dayton, Ohio in August 2019, Governor Cuomo called on the Democratic presidential candidates to support the "Make America Safer Pledge," which includes the following gun safety measures that New York passed in 2013 with the SAFE Act:

Today the Governor also hosted the second of three conferences to help teachers, school administrators and parent representatives understand the new law and how to use it to keep schools safe. The law, part of the nation's strongest gun laws, establishes a new civil procedure that allows a concerned family member, school official or member of law enforcement to obtain a court order - known as an Extreme Risk Protection Order - to remove and keep guns away from individuals who pose a serious risk of harm to themselves or others. This court order specifically prohibits a person from purchasing or possessing a firearm, rifle or shotgun while the order is in effect. The new law became effective August 24, 2019. An additional conference is planned for later this fall in Albany.

At the first conference to raise awareness about the state's Red Flag gun safety law in September, Governor Cuomo announced the launch of a call center and a new website offering information and links to step-by-step instructions about how to apply for an Extreme Risk Protection Order. The call center is staffed by individuals trained to answer inquiries from family members, police and educators. These staff members will have access to extensive resources and contact information for local law enforcement, school officials, the court system and mental health agencies to ensure callers are referred to the appropriate services. The call center, which is now open, can be reached at 877-NYS-0101 and will be operated Monday to Friday from 8 a.m. to 9 p.m. The hotline will also be open today, Saturday, October 26, from 1 p.m. to 9 p.m.

No legal gun owners' rights have been violated, but unnecessary, dangerous weapons are off the streets and dangerously mentally ill people cannot by guns.

Assembly Member Jo Anne Simon said, "New Yorkers are safer than ever because of New York's aggressive efforts to reduce the scourge of gun violence, a major public health crisis. New York has shown that it can be done within the contours of our constitutional rights. I thank Governor Cuomo for his leadership and agree that it's time for the rest of the nation to experience the benefits of concerted gun violence prevention measures which protect us all."

Daphne Frias, March for Our Lives New York State Director said, "New York State has long been at the forefront of innovative and life saving gun violence prevention policy. Since the passage of the SAFE Act in 2013, statistics indicate that gun violence has drastically reduced; once again proving that common sense gun legislation does save lives. It is for this reason, that March For Our Lives is proud to support the Make America Safe Pledge. As we are on the precipice of a historic election for our country, it is the responsibility of exemplary states, like New York to ask our presidential candidates to not only speak about acting on gun violence prevention, but to make a pledge to do so. It is in this same vein, that we stand with the Governor today, in his statewide initiative to educate New Yorkers on the effectiveness and proper usage of ERPO's. ERPO's are a strong mechanism for helping to prevent gun violence, and it is our duty a gun violence prevention leaders to educate those in our state on how they can help us prevent necessary tragedy. We thank the Governor, for consistently being a champion of gun violence prevention, and are thrilled to be standing beside him."

Natalie Tevethia, New York Chapter Leader, Moms Demand Action for Gun Sense in America, said, "Governor Cuomo continues to be a leader on gun violence prevention and we applaud his efforts for making progress where Washington has failed. At today's event he continued highlight the importance of not only passing strong gun laws, but implementing them."

Michael Mulgrew, President of the United Federation of Teachers, said, "After every mass shooting and gun tragedy, we hear heart-breaking stories of someone knowing something was wrong, that a danger was growing, but they didn't know where to go or what to do. I thank Gov. Cuomo for taking the lead on the issue of gun violence and coming up with ways to break this cycle."

Mark Barden, Co-Founder and Managing Director of Sandy Hook Promise said, "Gun violence has plagued our nation for too long, taking innocent lives and ripping apart families in its path. While the federal government ignores this tragic issue, Governor Cuomo has time and again enacted commonsense reforms to protect New Yorkers and help ensure no family is forced to endure the heartbreak of senseless gun violence. The Red Flag Law is just one of the many reforms signed by the Governor and it makes New York the first state in the nation to empower teachers to intervene when they believe someone is a danger to themselves or others." 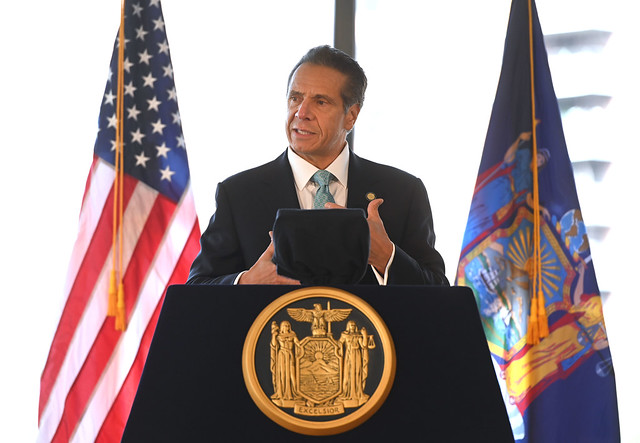 American Federation of Teachers President Randi Weingarten said, "I've spoken with many educators in Parkland, Florida and heard repeatedly that the shooter showed clear signs that he was a troubled soul. It's no surprise as the Brady Campaign reports 42 percent of mass shooters exhibit warning signs beforehand. That's why the Red Flag Law signed by Governor Cuomo is so important as a part of combatting the gun violence epidemic and protecting students and teachers. Schools should be safe sanctuaries, not armed fortresses. Teachers don't want to be armed, we want to teach and we want to protect kids. This smart law empowers educators and school staff to act and be heard when they suspect danger while still protecting students' due process right. We're proud to stand with the Governor to educate teachers, school administrators and parent representatives about this critical new gun safety law."

Linda Beigel Schulman, Mother of Parkland Victim Scott Beigel, said, "In the absence of leadership in Washington on gun safety, Governor Cuomo and New York have led the way in enacting the strongest gun safety laws in the nation. We've already seen the success of the SAFE Act, and now this year New York has gone even further with the Red Flag Law, which will keep guns out of the hands of potentially dangerous individuals and help prevent these needless tragedies from happening in the first place. Any person running for president in 2020 should make gun safety a top priority, and I urge all candidates to follow New York's lead and sign the Governor's "Make America Safer" pledge."

Gun violence is plaguing our nation at record levels - 58% of American adults or someone they care for have experienced gun violence in their lifetime. This issue is pervasive and is impacting communities of all social economic status and across all regions.

Following the Sandy Hook tragedy in 2013, Governor Cuomo immediately took action by championing and passing the SAFE Act, which enacted the strongest gun control laws in the nation. Since the passage of the SAFE Act, 139,371 reports from mental health professionals have been received by state officials intended to keep weapons away from people with mental illnesses that are likely to "engage in conduct that will cause serious harm to self or others." These reports - which represent nearly 98,000 people with a potential dangerous mental disposition - are used to notify appropriate local licensing officials who suspend or revoke weapon licenses and prompt local law enforcement officials to remove weapons that are not surrendered.