Governor Andrew M. Cuomo today signed legislation (S.4331/A.6449) to reinstate the speed camera program in New York City and expand the number of authorized school speed zones from 140 to 750. The bill also expands the hours of the program to weekdays between 6 a.m. and 10 p.m.

"Something as simple as walking to and from school can be the most dangerous part of the day, especially in this city with this complexity and this density. We have learned it the hard way. We have lost too many people, especially too many young people. We have to do better and we can do better," Governor Cuomo said. "This bill will increase the number from 140 to 750 speed cameras in the city, extend the hours of operation of the speed cameras and will mandate that the city prioritize placement of the cameras by speed and crash data. It's common sense. It works and it is the right thing to do."

"There is no greater message on Mother's Day than doubling down on our commitment to ensuring the safety of our students getting to and from school," said Lieutenant Governor Kathy Hochul. "No parent should have to question whether or not they'll see their child again at the end of the day. This legislation allows for the expanded operation of speed cameras around schools in New York City. Speed cameras are vital to monitor traffic and keep our students free from harm, helping to save lives."

This legislation reinstates and expands a bill signed by the Governor in 2013 authorizing the city to develop the program using camera technology to record and enforce speeding violation in school zones. Upon the program's expiration in July 2018, and after the Republican-controlled Senate failed to extend the authority before the end of the legislative session, Governor Cuomo signed an executive order allowing the city to impose the same fines authorized under the expired law and access data from the DMV to carry out the program for the 2018-19 school year.

This bill will increase the number from 140 to 750 speed cameras in the city, extend the hours of operation of the speed cameras and will mandate that the city prioritize placement of the cameras by speed and crash data. It’s common sense.

Since the activation of the cameras, the number of people killed or severely injured in crashes in school zones with speed cameras declined by 21 percent, and the rate of daily violations for excessive speeding has declined by over 60 percent.

"Ensuring students and pedestrians are protected in school zones is common sense," Senate Majority Leader Andrea Stewart-Cousins said. "Speed cameras have been proven to prevent tragedies and save lives. Together with our partners in the Assembly, -and the Governor we will help ensure students are better protected by expanding speed camera usage to more areas.  I applaud Senator Gounardes for his leadership on this critical issue.

"The Assembly Majority is committed to making sure that New York's students have all the tools and resources they need to get a quality education, including being able to get to and from school safely," Assembly Speaker Carl Heastie said. "The speed camera program in New York City has proved to be a lifesaver - reducing speeding, distracted driving and dangerous accidents in school zones. I am glad that we are finally reinstating and expanding this program, making the streets are a safer place for our all of our students, parents, school staff and pedestrians." 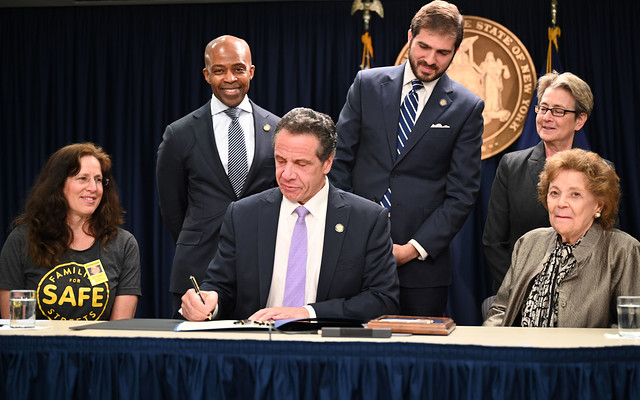 Senator Andrew Gounardes said, "Today is a major victory in the fight for street safety. No parent, senior, or pedestrian of any age should live in fear of crossing the street because of speeding traffic. Signing this bill into law today will slow traffic and saves lives. Plain and simple. I thank Governor Cuomo and Assembly Member Deborah Glick for being so committed to renewing and expanding the speed camera program. Most of all, I want to thank the families who've lost loved ones and the advocates for sharing their stories for making this happen. They turned their pain into purpose and got this done. We wouldn't be here today without them."

Assembly Member Deborah J. Glick said, "I am very gratified that today we are signing into state law my school zone speed camera expansion bill. This bill is the culmination of several years work to ensure that all children, their caregivers, and school staff are protected against the dangers of speeding motorists as they travel to and from school. Since passing a demonstration program in 2013, locations with cameras saw speeding violations drop more than 60% and traffic fatalities drop by 55%. This bill expands this life-saving and proven program by, among other things, increasing the number of school zones that may operate speed cameras from 140 to 750. I am grateful for the Governor's support, and the partnership of Senator Gounardes. This session we were able to put children's safety above political posturing and secure this hard-fought victory for pedestrian and cyclist safety. Most importantly we owe a debt of gratitude to the advocacy groups, Families for Safe Streets & Transportation Alternatives, for their leadership on this critical issue."

"Speed cameras are keeping our kids safe and saving lives. We needed to protect more kids at more schools, and now we have the power to do it," said Mayor de Blasio. "I want to thank Governor Cuomo, Senate Majority Leader Stewart-Cousins, Speaker Heastie and the entire legislature for doing right by our kids and helping make our city streets even safer."