At today's Labor Day Parade in New York City, Governor Andrew M. Cuomoannounced he will advance legislation to make the "New York Buy American" Act permanent. The "Buy American" law requires all structural steel and structural iron used in all state road and bridge construction projects with contracts worth more than $1 million to be made in America. The current law is set to expire April 2020, and making this law permanent will build on the State's commitment to investing in New York's infrastructure and workforce, while guaranteeing protection and dignity for workers.

"We are building more than any state in the United States of America, and we want to make sure that these projects last 100 years," Governor Cuomo said."At the top of the list for next year's State of the State and budget priorities is going to be an initiative to make the Buy America Act a permanent law in the State of New York. What Buy America says is the steel that we buy and the iron we buy must be American made. That does two things: it protects and grows New York jobs and it makes sure that we have the best quality steel and iron going into our infrastructure projects."

Under the "Buy American" law, the Department of Transportation, Thruway Authority, Bridge Authority, Metropolitan Transportation Authority, Office of General Services, SUNY Construction Fund and Dormitory Authority of the State of New York are required to include a contract provision requiring the use of American-made structural iron and structural steel for all surface road and bridge projects.

Since the "New York Buy American" law was signed in December 2017, several of the state's largest infrastructure projects have used American made structural iron and steel, including 110,000 tons of steel for the Mario M. Cuomo Bridge, 6,850 tons of steel for the first two phases of the Kosciuszko Bridge and 11,500 tons of steel for the Kew Gardens Interchange. Building these projects with high-quality, safer steel made by American workers instead of lower-quality foreign imports has created thousands of union jobs and will help ensure these structures last long into the future.

We are building more than any state in the United States of America, and we want to make sure that these projects last 100 years.

Mario Cilento, President of the New York State AFL-CIO said, "Today Governor Cuomo once again showed true leadership by promising to submit a bill to make permanent Buy American legislation in New York State. We have the best skilled workers in the world right here in New York and now we can be assured that our hard-earned tax dollars, as well as our jobs, will remain here instead of being sent overseas. While some talk of putting America first, our governor through his deeds and actions is actually doing it."

Gary LaBarbera, President, Building and Construction Trades Council of Greater New York said, "Governor Cuomo is once again stepping up for the hard working men and women of this state with his call to make the Buy American Act permanent. When he signed this law in 2017, the Governor ensured our state's most significant infrastructure projects would be built with high-quality American-made materials while protecting workers rights and spurring job growth in the process. I commend the Governor for his tireless efforts to ensure the labor movement remains strong in New York."

Del Vitale, United Steelworkers District 4 Director said, "Since his first day in office, Governor Cuomo has been one of the nation's fiercest advocates for the labor movement. He recognizes that the best skilled labor is right here in New York and the United States, not overseas, and he has continuously worked to ensure our jobs are protected. We thank Governor Cuomo for advancing legislation to make the Buy American Act permanent and for his commitment to maintaining and promoting union jobs in New York and the United States."

James Mahoney, President, New York State District Council of Iron Workers said, “The Buy American Act has helped create and preserve union jobs across the state and the nation, and by making it permanent we will continue to build on this growth. I thank Governor Cuomo for recognizing the importance of union workers to our economic prosperity and for his ongoing commitment to men and women in labor." 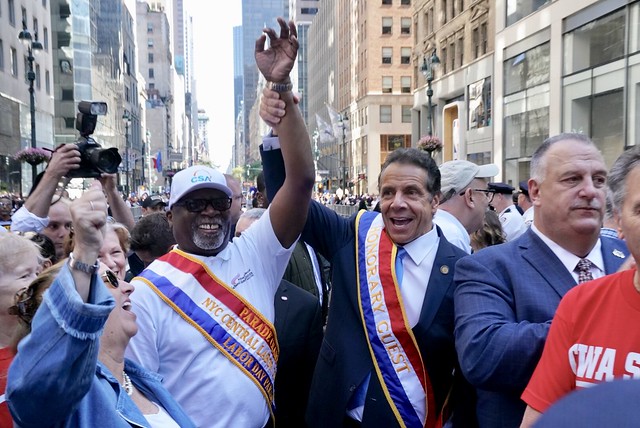