Legislation (S.6350-A/A.7434-A) Requires the Payment of Prevailing Wage to Building Service Employees at Co-Cops and Condos that Receive the 467-a Tax Abatement

"On Labor Day every year, we're reminded of the vital contributions of organized labor to building New York, and that's why I'm signing four pieces of legislation to help workers thrive across our state," Governor Hochul said. "These bills will make sure workers are paid fair wages, receive good benefits and stay safe on their worksites. Our state is home to a long and proud legacy of supporting working New Yorkers, and we're working to bolster that for the future."

This legislation (S.4682-B/A.485-B) establishes a demonstration program implementing speed violation monitoring systems in work zones by means of photo devices and relates to notices of liability and the adjudication of certain traffic infractions involving the use of photo monitoring devices.

Senator Tim Kennedy said, "When it comes to keeping our roads safe, New York needs to prioritize both motorists and the highway workers who dedicate themselves to improving and maintaining our infrastructure every day. I was proud to champion this legislation with Assemblymember Magnarelli and our brothers and sisters in labor because I firmly believe it will save lives and return workers home safely to their families. By signing this legislation into law, Governor Hochul is strengthening on-the-job protections and demonstrating a clear commitment to the wellbeing of our workforce."

Assemblymember William Magnarelli said, "The safety of workers on our roads is extremely important. Creating a system of cameras to record speed violations in work zones is one step of protecting these workers. Speed and distractions are deadly. Using photo monitoring devices identifies those who break the law and put our highway workers in jeopardy."

Making Contractors Liable for Wages Paid to Their Subcontractors

Senator Jessica Ramos said, "This Labor Day, we make history for New York's workers. Addressing wage theft in the construction industry and strengthening the benefits for New Yorkers in the Shared Work Program put more money in working families' pockets. I thank the Governor for taking soonest action and look forward to continuing our work towards a fair and inclusive recovery."

Assemblymember Latoya Joyner said, "Today, we are taking critical steps forward to eliminating wage theft.  This legislation protects the interests of hardworking construction workers over unscrupulous subcontractors. Wage theft is a crime of opportunity that disproportionately affects people who are already living paycheck to paycheck. With this legislation, New York State will ensure that construction workers are no longer exploited and will be able to collect any unpaid wages. Hard work deserves hard earned compensation."

On Labor Day every year, we're reminded of the vital contributions of organized labor to building New York, and that's why I'm signing four pieces of legislation to help workers thrive across our state

This legislation (S.6350-A/A.7434-A) requires the payment of prevailing wage to building service employees at co-ops and condos that receive tax abatements under section 467a of the tax law. The law applies to buildings with an average unit assessed value of more than $60,000, with the exception of buildings that have an average unit assessed value of $60,000 to $100,000 and have fewer than 30 units. The legislation makes affidavits certifying the payment of prevailing wages to building service workers public records that may be produced before a court or administrative tribunal. The New York State Department of Labor has the power to conduct an investigation and hearing and file a final determination to enforce the law and make sure employees are properly paid.

Senator Brian Benjamin said, "Luxury apartment buildings that can afford to provide prevailing wages and benefits to building service workers should be required to do so. These essential workers put their lives on the line everyday during the pandemic to keep New Yorkers safe and should be treated with respect. I want to thank Governor Kathy Hochul for recognizing their importance to the New York City economy by signing this bill."

Assemblymember Carmen De La Rosa said, "Public funds should never be used to subsidize low-wage jobs or undercut the industry standard. This is a great day for essential workers who risked their health and that of their families' to finally earn the wages and benefits they deserve." 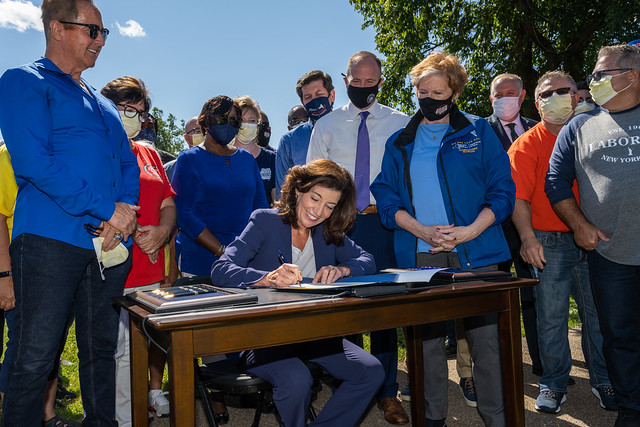 This legislation (S.4049/A.5678) changes the cap on Shared Work Benefits from 26 straight weeks to an amount of time equal to 26 weeks' worth of benefits. The shared work program allows employers to keep employees and avoid layoffs by allowing staff members to receive partial Unemployment Insurance benefits while working reduced hours. Under current law, claimants can only receive 26 weeks of benefits, regardless of what the claimant's maximum benefit entitlement is under UI. This bill will allow claimants to collect the reduced UI benefit under a Shared Work Program until they have hit their maximum benefit amount under traditional UI.

Assemblymember Latoya Joyner said, "New York is committed to preserving jobs, retaining experienced employees and ensuring employers are best positioned as the economy looks to rebound. With this legislation, NY will extend the length of time that an eligible claimant shall be paid benefits under the Shared Work Program. This program is a benefit to both employers and employees alike. As chair of the NYS Assembly Labor committee & sponsor of this legislation, I'm pleased the Governor has signed this into law.

New York State AFL-CIO President Mario Cilento said, "From day one, Governor Hochul promised to work collaboratively with the Legislature and Labor, and she has delivered on that promise by signing into law several bills that will improve the lives of working people. The bills signed into law today will; enhance roadway work zone safety, create a fairer unemployment benefit for workers whose hours were reduced in lieu of layoff, hold unscrupulous private construction contractors liable for wage theft; and require a prevailing rate for those who work in residential buildings receiving tax breaks. I also thank the Democratic Majorities in both houses and the bill sponsors, Assembly Labor Chair Latoya Joyner, Senate Labor Committee Chair Jessica Ramos, Senator Tim Kennedy, Assemblymember William Magnarelli, Senator Brian Benjamin and Assemblymember Carmen De La Rosa for making these life-changing bills a priority."

Gary LaBarbera, President of the New York State Building and Construction Trades Council, said, "We thank Governor Hochul for signing this critical legislation into law, which will provide New York's construction workers with a new remedy to fight back against wage theft violations that deprive hardworking men and women of their dignity and livelihoods. This is a significant step in helping to clean up the industry of unscrupulous contractors and a clear sign that New York will no longer tolerate bad actors consistently taking advantage of workers. We also thank our legislative leaders for their continued commitment to this crucial legislation and we look forward to working with them and Governor Hochul in continuing to advance and protect workers' rights.

SEIU Local 32BJ President Kyle Bragg said, "On this Labor Day, 32BJ commends Governor Kathy Hochul for signing legislation to lift up New York's workers with better wages & benefits and strengthened protections. More than 2,000 building service workers who risked their lives to keep New Yorkers safe during the COVID-19 pandemic will finally start earning wages that can sustain their families. The pandemic also laid bare the critical importance of a robust safety-net for workers during economic turbulence. Maximizing the number of weeks that workers can collect benefits through the NYSDOL's Shared Work Program helps both workers and employers. We look forward to continuing our work with the legislature and the Governor for the benefit of all workers."

New York City District Council of Carpenters Executive Secretary-Treasurer Joseph Geiger said, "For years, exploited workers have been ripped off by greedy contractors with nowhere to turn. This legislation will ensure every construction worker in New York is protected from wage theft. It is especially fitting that it will be signed into law by Governor Hochul who has been a steadfast ally of labor and workers everywhere. The New York City District Council of Carpenters also thanks Senator Ramos and Assembly Member Latoya Joyner for leading the charge to pass the bill in the State Legislature. This is proof that government can still be a positive force for the workers of America."