Legislation (S.6443-B/A.8105-B) Requires Criminal or Family Court Judges Inquire About Defendant's Possession of a Firearm When Orders of Protection are Issued

Legislation (A.7748-A/S.3855-A) Allows Survivors of Sexual Assault to Apply to State Board of Elections to Seal Voter Registration Information from Public

Governor Kathy Hochul today signed a comprehensive package of legislation that will strengthen protections for survivors of domestic and gender-based violence by ensuring guns are seized from abusive partners and protecting the confidentiality of survivors. Governor Hochul signed the five bills into law alongside survivors, advocates and legislative champions at Union Settlement, a nonprofit providing resources to survivors in East Harlem.

"My administration is committed to eradicating domestic violence and supporting survivors - a mission that has been a lifelong journey for generations of women in my family," Governor Hochul said. "I am proud to sign these new laws that will enhance confidentiality, keep New Yorkers out of harm's way, and give them the flexibility they need to make the best decisions for themselves and their families."

Signed during Domestic Violence Awareness Month, observed in October each year, the laws reaffirm Governor Hochul's steadfast commitment to protecting the rights of survivors and reducing the access abusive partners have to firearms, which are used in roughly a third of domestic violence homicides reported in New York State.

Office for the Prevention of Domestic Violence Executive Director Kelli Owens said, "Today's legislation will enhance safety for all survivors, because in domestic and sexual violence situations, safety matters above all else. Whether we're talking about gun safety, privacy rights, or financial abuse, we want New Yorkers to know that they have options, resources, and protections. I am honored to serve Governor Hochul, who has always been a true advocate for survivors."

Office of Victim Services Director Elizabeth Cronin said, "Much of the work done by victim assistance professionals is to provide services and support to victims and survivors in the aftermath of crime. This comprehensive package of legislation focuses on prevention by strenghtening the court's ability to restrict an abuser's access to firearms and empowering individuals to make choices that are in their best interests. I applaud Governor Hochul for efforts to reduce and prevent domestic and sexual violence and her steadfast commitment to improving the lives of victims and survivors of crime."

Legislation S.6363-A/A.8102 requires courts to order the seizure of firearms, rifles, and shotguns when an abusive partner willfully refuses to surrender them in defiance of a court order issued in connection with an order of protection. The law will ensure individuals who are subject to a protective order and already deemed to pose a danger will have their firearms seized if they fail to willfully obey a previous order to surrender them.

Legislation S.6443-B/A.8105-B requires criminal and family court judges inquire whether an individual they are subjecting to an order of protection possesses a firearm. While existing laws required these individuals to have their firearm license revoked or suspended, they did not require judges to pose this question.

State Senator Shelley Mayer said, "We cannot continue to allow firearms to remain in the hands of abusers because of loopholes that exist in our judicial system. The bills I sponsored with Assemblymember Clark, S.6363A/A.8102 and S.6443B/A.A8015B, are common sense measures that will provide greater protection to those facing gun violence, especially in domestic violence situations. Thank you to Governor Kathy Hochul for signing these bills into law."

Assemblymember Sarah Clark said, "As we continue to highlight Domestic Violence Awareness Month, two important bills signed into law today will strengthen court action around access to firearms and require additional steps to be taken when an order of protection has been granted. The immediate hours after the involvement of law enforcement or courts are the most dangerous for victims of domestic violence and the presence of firearms increase the likelihood of harm. We must do all we can to decrease risk of retaliation or further abuse. We also know the pandemic resulted in spikes in domestic violence and abuse across the board, making it clear that there was much more work to be done to expand resources and protections for survivors. The safety and ability of survivors to thrive cannot wait, and I am grateful for Governor Hochul's commitment to hope and her advocacy for our most vulnerable families."

Legislation S.3855/A.7748-A allows sexual violence survivors to apply to the state Board of Elections to have their voter registration information sealed from public view, thereby extending critical privacy protections that will exempt their records from being disclosed via freedom of information law request. Under the existing law, only the survivors of domestic violence crimes may keep this information confidential.

State Senator Tim Kennedy said, "It is critical that we do all we can to protect survivors of sexual violence from harassment and retaliation. By expanding the scope of survivors who qualify to have their voter records sealed, we are ensuring that simply doing one's duty as a citizen by voting does not require a survivor to put their health and safety at risk. Thank you to Governor Hochul for signing this important piece of legislation into law."

Assemblymember Fred Thiele said, "Several years ago New York State enacted legislation to protect the privacy and security of victims of domestic violence by permitting their voting records to be kept confidential upon request. My legislation expands this protection to include the victims of sexual offenses. Too many New Yorkers live in fear because of sexual violence. As we continue our battle against these heinous crimes, it is critical to provide privacy and security to the victims by allowing their geographic information relating to their voting records to be kept private. Victims should feel safe to exercise their constitutional right to vote. I thank Governor Hochul for approving this legislation."

My administration is committed to eradicating domestic violence and supporting survivors - a mission that has been a lifelong journey for generations of women in my family.

Legislation S.7157-A/A.6207-B expands the existing requirement of utility, wireless, cable, satellite, and telecommunication companies to allow individuals under shared contracts and survivors of domestic violence to opt-out of such contract without fee, penalty, or charge. The legislation expands on existing laws by further prohibiting actions by companies that may limit the ability or willingness of survivors to leave these shared contracts.

State Senator Kevin Parker said, "Not all of the harm that comes from Domestic Violence is physical, much of it is economic. My legislation is designed to alleviate some of that economic harm by relieving survivors from utility bills that are often weaponized by their abusers. There is much that needs to be done to address the economic coercion that survivors face, this is a small but important step. Thank you Governor Hochul for signing this necessary legislation into law."

Assemblymember Linda B. Rosenthal said, "During the COVID pandemic, instances of domestic violence (DV) increased exponentially, adding to the already astronomic numbers of people affected by the scourge of DV. Over time, the tactics used by domestic violence perpetrators have evolved, and they have created new ways of exerting control over victims, including through shared cable, phone and utility contracts. Leaving a domestic violence situation is never easy, and survivors should not be burdened with the additional worry of removing themselves from a contract shared with their abuser. I am pleased to see Governor Hochul signing my legislation, during Domestic Violence Awareness Month, to provide survivors some relief by allowing them to be released more easily from shared contracts."

Legislation S.7263-A/A.2519-A requires health insurers and health maintenance organizations to provide domestic violence survivors with the option of providing alternative contact information so they may access their claims information and benefits in a manner that shields and protects them from their abuser. The change will allow survivors to seek medical and mental health services and use their health insurance to pay for them without fear that insurance claims, forms, or billing correspondence will be sent to the address of the policyholder.

State Senator John Liu said, "Domestic violence survivors often require extreme discretion when seeking assistance from service providers in order to protect their privacy and safety. This common sense bill provides greater security to domestic violence survivors by requiring health insurers to provide the help they need while protecting their privacy and safety from their abusers. Many thanks to Governor Hochul and my colleagues in the legislature for adding a new layer of protection to victims of domestic violence."

Assemblymember Steven Cymbrowitz said, "The legislation I sponsored (A.2519) will help protect the privacy and safety of domestic abuse victims, allowing them to access important medical or mental health services without fear that their claim or billing correspondence will reveal their location or sensitive information to their abuser. Similarly, individuals still living in abusive situations will be more likely to seek necessary treatment if their privacy can be assured — and that this treatment may help them connect with resources in their communities that help victims of domestic violence." 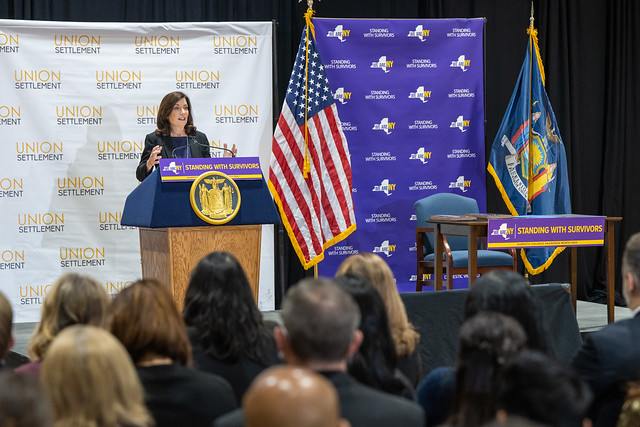 The package of legislation builds upon Governor Hochul's strong efforts to address gender-based and domestic violence throughout New York State. The Governor signed into law this spring legislation that expanded coverage under the Human Rights Law for survivors of domestic violence, improving their access to the complaint process by prohibiting discrimination against them in areas such as housing and public accommodations. Previously, they were only covered as a protected class under the employment provisions of the Human Rights Law.

In April, Governor Hochul issued an executive order directing the Office for the Prevention of Domestic Violence to create a policy which strengthens New York State's procedures for addressing domestic and gender-based violence in the workplace. Earlier this month, OPDV issued a model policy, which state agencies can use to ensure the proper procedures are in place to guide responses when domestic and intimate partner violence issues intersect with the workplace.

To better understand public perceptions of domestic violence, OPDV conducted an opinion poll of 5,000 New Yorkers this summer. The findings suggested that while most New Yorkers are confident in their understanding of domestic and gender-based violence and that many know a survivor, too many still believe these issues resulted from outside factors — drug or alcohol use, poor impulse control, or anger problems — rather than the decisions of an abusive partner.

For the past 30 years, OPDV has remained the country's only Cabinet level agency dedicated to the issue of gender-based violence. The agency's mission is to improve New York State's response to and prevention of domestic and sexual violence with the goal of enhancing the safety of all New Yorkers in their intimate relationships through policy, programming, and public awareness. OPDV also works with local providers to ensure that services are survivor-centered, trauma-informed, and culturally responsive throughout the state.

New York State's Domestic and Sexual Violence Hotline provides free, confidential support 24/7 and is available in most languages: 800-942-6906 (call), 844-997-2121 (text) or @opdv.ny.gov (chat). Individuals also can visit www.ovs.ny.gov/connect to find a victim assistance program in their community. The Office of Victim Services funds and supports more than 200 programs that provide direct services for victims and survivors of crime and their families, including therapy, support groups, case management, civil legal assistance, accompaniment to court, and transportation, among other assistance.