Legislation (A.3719A/S.117A) Requires Museums To Acknowledge Art Stolen from the Jewish Community during the Nazi Era in Europe

Legislation (A.9338/S.8318) Requires the Department of Financial Services To Publish a List of Banks that Voluntarily Waive Fees for Holocaust Reparation Payments

"As New Yorkers, we are united in our solemn commitment to Holocaust survivors: We will never forget," Governor Hochul said. "These are individuals who have endured unspeakable tragedy but nonetheless have persevered to build lives of meaning and purpose right here in New York. We owe it to them, their families, and the six million Jews who perished in the Holocaust to honor their memories and ensure future generations understand the horrors of this era."

Legislation (A.472C /S.121B) will help ensure that New York schools are properly educating students on the Holocaust. The legislation directs the New York State Education Department to determine whether school districts across the state have met education requirements on instruction of the Holocaust, which have been required by law since 1994. It will also require NYSED to identify how non-compliant schools will close gaps in knowledge of the Holocaust in schools.

State Senator Anna M. Kaplan said, "With antisemitism on the rise, and Holocaust misinformation exploding around the world, it's never been more important that we learn the lessons of the Holocaust, and ensure our next generation knows about our history, no matter how dark or difficult the conversation may be. It's why I've fought tirelessly to pass the Holocaust Education Bill, so that we can ensure this vital history is being taught to students in New York, and so that we may never forget what happened. I'm so grateful for my partnership with Assemblymember Nily Rozic, for the leadership of Governor Kathy Hochul, and for the countless advocates and organizations who fought alongside me since day one of this important effort."

Assemblymember Nily Rozic said, "Never Again must serve as a call to action, not just empty words we say. As antisemitism rises across New York and Holocaust survivors age, this new law will ensure that New York students are taught about what happens when hatred goes unchecked. I'm grateful to Governor Hochul for signing this package of legislation, and to all the organizations and advocates whose tireless work brought us to this moment."

Legislation (A.3719A/S.117A) requires museums to acknowledge the origins of art pieces that were stolen from Europeans during the Nazi era, primarily from Jewish families. During World War II, the Nazis looted some 600,000 paintings from Jews, enriching the Third Reich and eliminating all vestiges of Jewish identity and culture. Museums across New York display this stolen art with no recognition of or transparency around their origins, and this legislation will require museums to disclose information on the history of these stolen art pieces.

State Senator Anna M. Kaplan said, "During the Holocaust, some 600,000 paintings were stolen from Jewish people not only for their value, but to wipe our culture and identity off the face of the Earth. Today, artwork previously stolen by the Nazis can be found hanging in museums around New York with no recognition of the dark paths they traveled there. With the history of the Holocaust being so important to pass on to the next generation, it's vital that we be transparent and ensure that anyone viewing artwork stolen by the Nazis understand where it came from and its role in history."

Assemblymember Charles D. Lavine said, "80 years later we are still forced to confront the horrors of the Holocaust. Too many people remain ignorant of the indiscriminate wholesale murder of more than six million Jews by the Nazis during World War II, plus the countless examples of humiliation and, in cases such as this, blatant profiteering. This law is indicative of how we must continue to fight hate through education."

Legislation (A.9338/S.8318) requires the New York State Department of Financial Services to maintain and update a list of financial institutions that waive wire fees associated with Holocaust reparations payments. About one-third of Holocaust survivors in the U.S. live in poverty. This legislation will ease unnecessary burdens that banks may place on Holocaust survivors that receive reparation payments.

State Senator Zellnor Myrie said, "We can't heal the trauma that elderly Holocaust survivors have endured, but we can take steps to help them make ends meet. I'm grateful to Governor Hochul for signing this bill into law and to Assembly Member Eichenstein for his partnership. I encourage all state-chartered banks to voluntarily waive these transaction fees for survivors and look forward to seeing them on the state's list next year."

Assemblymember Simcha Eichenstein said, "Our Holocaust survivors are a precious gift and it is incumbent upon us to assist them in any way we can. This bill, which I sponsored with Senator Zellnor Myrie, will ensure that our Holocaust survivors are aware of which banks are waiving fees on reparations payments, fees that could add up substantially. Our elderly survivors that have endured so much should not be charged corporate transaction fees for payments that are rightfully theirs. They deserve better. Thank you Governor Hochul for recognizing the significance of this bill and signing it into law today."

We owe it to them, their families, and the six million Jews who perished in the Holocaust to honor their memories and ensure future generations understand the horrors of this era.

New York State Department of Financial Services Superintendent Adrienne A. Harris said, "New York is taking a critical step to support Holocaust survivors by waiving transfer and processing fees associated with reparations payments. I thank the Legislature and Governor Hochul for passing this important bill and signing it into law, so that survivors have access to 100% of their payments to meet their everyday needs. Through the Holocaust Claims Processing Office, DFS will continue to work with state, federal, and international counterparts to serve as a meaningful resource to provide long overdue justice for Holocaust survivors, victims, and heirs."

Kupferberg Holocaust Center Executive Director Laura Cohen said, "The point of effective Holocaust education is to convey how this one wretched part of history didn't take place in some distant time and place.  The Holocaust happened to people in our communities and continues to resonate in tragic ways, because there is a continuum from antisemitism, hatred, and scapegoating to mass atrocities and genocide.  Holocaust education curricula in schools are essential to making these connections and inspiring students to create change in our society."

Consul General of Israel in New York Ambassador Asaf Zamir said, "This historic bill to further Holocaust education will cast light where there is now darkness, empathy where there is terrifying ignorance. Knowledge of the largest scale operation of persecution and genocide is waning, and hate has risen unchecked for too long. Protecting our history is important to the survival of not only every group targeted by genocidal fascism, but to sustaining the health of democracy itself. We thank Senator Anna Kaplan, Assemblywoman Nily Rozic and Governor Kathy Hochul for advocating to not only survey the state of Holocaust education in schools, but to facilitate its continued improvement and address its worrying decline amongst today's youth."

Museum of Jewish Heritage Chairman of the Board of Trustees Bruce Ratner said, "We thank our Governor and the state Legislature for today's action. Sadly, studies have shown that far too many youth and young adults in our state — and across our nation — are unaware of the Holocaust, have never visited a Holocaust museum, or spoken with a Holocaust survivor. We must do all in our power to ensure that the Holocaust never fades from our memory. Teaching and learning about the Holocaust not only commemorates the victims but helps to create a forum for examining the history and evolution of antisemitism at a time where we continue to witness xenophobia, unfolding genocides, the ongoing refugee crisis, and threats to democratic values. As an institution committed to always remembering the Holocaust, education holds the key to individual and collective responsibility to create a better, safer society."

CEO of UJA-Federation of New York Eric S. Goldstein said, "It has never been more important for students in New York to learn about the atrocities of the Holocaust. This legislation authorizes the State Education Department to conduct a survey identifying which schools are teaching this required subject matter and is a crucial step in ensuring that the critical lessons of the Holocaust are transmitted across our community. UJA-Federation of New York thanks Governor Hochul for signing this significant legislation into law, and for the tireless efforts of Senator Kaplan and Assemblywoman Rozic to make sure this bill passed the Legislature." 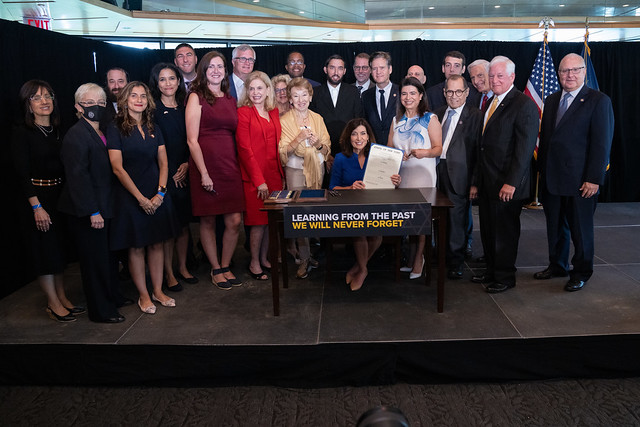 American Jewish Committee Long Island Regional Director Eric Post said, "In a time of rising antisemitism and hate crimes, this law is needed to help ensure that all students in New York properly learn about one of the most tragic and pivotal moments in world history. Governor Hochul has been an unstinting supporter of the Jewish community and we thank her for supporting this important measure."

Jewish Community Relations Council CEO Gideon Taylor said, "At a time where 60 percent of New Yorkers aged 18 to 39 are unaware that six million Jews were murdered by the Nazis, I congratulate Governor Kathy Hochul for her leadership and for signing historic legislation today that ensures our children will Never Forget the bitter lessons of the Holocaust. Sincere gratitude goes to the authors of this legislation, Assemblywoman Nily Rozic and Senator Ann Kaplan.  Also of critical importance are the other pieces of legislation being signed today as they relate to financial protections surrounding our Holocaust Survivors.  Thank you to Assemblymen Simcha Eichenstein and Charles Lavine as well as Senator Zellnor Myrie for showing us that we must always honor the tremendous sacrifices endured by our Holocaust survivors."

ADL NY/NJ Regional Director Scott Richman said, "The need to evaluate how Holocaust education is implemented in our schools could not be more urgent with antisemitism and all forms of hate on the rise. ADL documented a total of 416 antisemitic incidents last year in New York State as detailed in ADL's annual Audit of Antisemitic Incidents. That is an incredible 24% increase over the year before. Thanks to this important legislation signed today by Governor Hochul, New York can review how it addresses this hate in our state through the important tool of Holocaust education."

Director of the Emil A. and Jenny Fish Center for Holocaust and Genocide Studies at Yeshiva University Dr. Shay Pilnik said, "The Holocaust teaches us powerful lessons on the moral and physical lows that a society guided by antisemitism, racism and hatred can be led to. And it obligates us to remember, to educate, to act — to ensure that these evils find no home in our state and country. These are lessons that must be taught in every middle school and high school in New York State."

StandWithUs Regional Director Avi Posnick said, "StandWithUs thanks Governor Hochul for signing Bill A472C/S121A into law.  This legislation surveys Holocaust education to bring to it up to a meaningful standard for all New York students.  At a time when antisemitic crimes are spiking, we are grateful for Governor Hochul's leadership in the fight against this scourge. This bill follows Governor Hochul's recent proclamation to adopt the International Holocaust Remembrance Alliance Working Definition of Antisemitism to help address the 'intolerable levels of antisemitism' in 'the nation and New York.' Together the measures stress the critical importance of learning not only about but also from the Holocaust."