"At a time when the very foundation of our democracy is under threat, New York is leading the nation with new laws protecting the fundamental right to vote," Governor Hochul said. "Today, we honor the work of the late Congressman John Lewis and activists like Medgar Evers as we make meaningful changes to our laws that enfranchise voters and ensure the voices of the people are heard in our democracy. Where the federal government fails to act, New York will continue to step up and lead the way: we did it with abortion protections, we did it with gun safety reforms, and I'm so proud to say we are doing it again with voting rights."

"As a black man who represented a district in Congress that is nearly 90 percent white, in one of the most rural parts of the country, and as the first person of color to ever represent upstate New York in Congress, my experience is proof that voting can bring about change that once might have seemed out of reach," said Lieutenant Governor Antonio Delgado. "By amending the voter laws in New York State, we are providing all people, regardless of the color of their skin or where they live, with an equal opportunity to have their voices heard at the polls."

Senate Majority Leader Andrea Stewart-Cousins said, "The John R. Lewis Voting Rights Act of New York will expand and codify voter protections, empower citizens at the ballot box, and promote accountability among elected officials. I am proud that New York is standing as a true bastion of voting rights despite the anti-democratic rollbacks being set forth by Republicans across the nation."

Assembly Speaker Carl Heastie said, "Voting rights are under attack across the nation and New York must protect this sacred constitutional right. While other states work to disenfranchise voters and dilute votes, I want to thank the Chair of the Elections Committee Latrice Walker, our Assembly and Senate colleagues, and Governor Hochul for their commitment to passing the strongest voting rights protections in the nation."

Today, we honor the work of the late Congressman John Lewis and activists like Medgar Evers as we make meaningful changes to our laws that enfranchise voters and ensure the voices of the people are heard in our democracy.

Legislation S.1046-E/A.6678-E will encourage participation in voting by all eligible voters by ensuring that barriers to accessing the polls are removed. In particular, members of racial, ethnic, and language-minority groups will now be protected by new measures that will ensure they have an equal opportunity to vote in the State of New York. This legislation does so by addressing:

State Senator Zellnor Myrie said, "By enacting the strongest voter protection law of any state in the country, New York is sending a powerful message: every voter counts and every vote should be counted. I'm grateful to Governor Hochul for signing the VRA today and to my partner Assemblymember Latrice Walker for getting this bill over the finish line. We must always continue to defend and strengthen voting rights: our democracy depends on it."

Assemblymember Latrice Walker said, "The John R. Lewis Voting Rights Act of New York is one of the most important bills to be signed into law in recent history and it will deliver the strongest and most comprehensive voter protections of any state In America. It will codify the very cornerstone of our democracy — the right to vote. At the same time, we have honored the legacy of the late Representative John R. Lewis, who once said, "The vote is precious. It is almost sacred. It is the most powerful nonviolent tool we have in a democracy." Thank you to all the tireless advocates, my colleagues, Governor Hochul, and organizations like the NAACP and the NYCLU. As the Assembly sponsor of the bill, I could not be more proud." 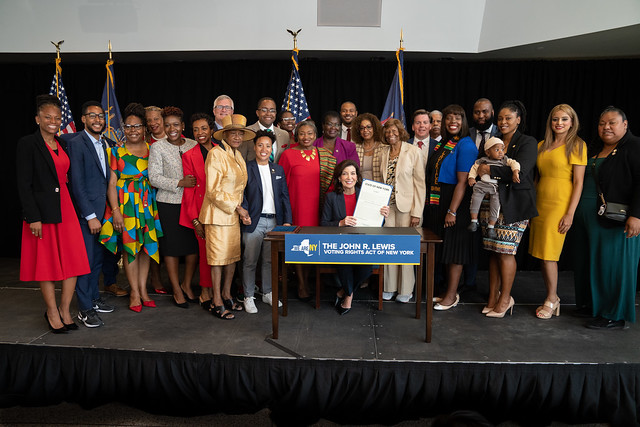 President of the NAACP New York State Conference Dr. Hazel N. Dukes said, "For too long our communities have suffered injustices, but were unable to vote to change them because of suppression at the polls. Today, New York leads the way, yet again, to right the wrongs of our past and ensure that the voices of all can be heard. I applaud Assemblymember Latrice Walker and Senator Zellnor Myrie, the sponsors of this historic legislation, for expanding voter protections for New Yorkers across the state. Thank you Governor Hochul, Leader Andrea Stewart-Cousins, and Speaker Carl Heastie for working together on this landmark legislation."

New York Civil Liberties Union Executive Director Donna Lieberman said, "Amidst a backdrop of nationwide attacks on voting and a lack of federal leadership, New York just enacted one of the strongest voting rights laws in the nation. Today, Governor Hochul made an enormous stride toward ensuring communities that have historically been denied an equal opportunity to participate in the political process can cast a meaningful ballot without obstruction, interference, or discrimination. As we work to implement the John R. Lewis Voting Rights Act — from challenging racial gerrymandering and voter intimidation to expanding language assistance and polling access — we must ensure its protections remain strong. Lawmakers must resist any attempt to walk back our progress and must fight to protect the right to vote."

Medgar Evers College President Dr. Patricia Ramsey said, “The signing into law of the John R. Lewis Voting Rights Act of New York, by Governor Kathy Hochul, was a historic day for the people of New York and for Medgar Evers College; a College birthed out of the Central Brooklyn Community, with social justice in its DNA and named for civil rights leader Medgar Wiley Evers, field secretary for the NAACP who was slain because of his advocacy for the rights of Blacks in Mississippi to vote. As President of Medgar Evers College, I am extremely proud that Dr. Hazel Dukes and members of the NAACP advocated for this historic signing to take place at our college, in honor of Medgar Wiley Evers.  I’m grateful to Governor Kathy Hochul, Majority Leader Stewart-Cousins, Senator Myrie, Assemblymember Walker and all involved in bringing this to fruition.  Juneteenth 2022 will be in the annals of history as the day that the John R. Lewis Voting Rights Act of New York was signed into law, at Medgar Evers College.”

Center for Law and Social Justice at Medgar Evers College Executive Director Lurie Daniel Favors Esq. said, "The signing of the New York State John R Lewis Voting Rights Act today at Medgar Evers College was an historic and momentous occasion that solidifies New York's position as an emerging leader when it comes to protecting voting rights. As voting rights protections fall across the nation and in light of the Supreme Court's willingness to align with the retrenchment of voter protections, it is imperative that organizers, activists and elected officials at the state and local level work to protect voters. This legislation includes a preclearance provision, it expands protections for language minorities, and incorporates a democracy canon that ensures the legislation is interpreted in a way that centers the needs of voters. New York has now set a model for how to protect voters and it is one that the rest of the nation should follow."

LatinoJustice PRLDEF Associate Counsel Fulvia Vargas-De Leon said, "Signing the John R. Lewis Voting Rights Act of New York into law places our state at the forefront of protecting communities of color from discriminatory actions that limit equal participation in our democracy.  This right should not be controversial or political. Our fight for full and equitable access to the ballot is far from over, but this law gives us a strong tool to come one step closer to a democracy representative and inclusive of all voters."