Governor Kathy Hochul and MTA Chair and CEO Janno Lieber today rode the inaugural Long Island Rail Road train to Grand Central Madison, which arrived at the terminal platform at 11:07 a.m. The train was the first of Grand Central Direct trains now operating between Jamaica and Grand Central Madison between 6:15 a.m. and 8:00 p.m. on weekdays and between 7:00 a.m. and 11:00 p.m. on weekends. Trains are running every 30 minutes in both directions during weekday midday periods as well as on weekends, and once per hour during peak periods - arriving in Grand Central between 6:30 a.m. and 10:00 a.m. and departing between 4:30 p.m. and 7:30 p.m.

"Grand Central Madison is a game changer for New Yorkers, and I look forward to welcoming Long Island commuters to our tremendous new terminal," Governor Hochul said. "Infrastructure is all about connections, and this project is an extraordinary step forward to better connect millions of New Yorkers with their homes, their families and their jobs."

Grand Central Madison doubles LIRR capacity into Manhattan. In conjunction with the completion of a third track on the LIRR Main Line, the new terminal enables reverse commuting options that were not previously possible. For LIRR customers who work on the east side of Manhattan, this new terminal is expected to save 40 minutes a day of commute time round trip.

The terminal also provides seamless connectivity through the MTA region, with both commuter railroads and the New York City Subway all in one building for the first time. The expansion of CityTicket will provide an additional travel option to Queens communities served by the LIRR, providing easier access to job opportunities. The impending introduction of the Combo Ticket will give New Yorkers, and those visiting New York, more travel options than ever to get to Long Island, the Hudson Valley, or Connecticut from the five boroughs. Customers in Metro-North Railroad territory for example will now have an one-ticket ride to JFK Airport.

MTA Chair and CEO Janno Lieber said, "What we are opening today is truly breathtaking. The eight tracks, four platforms and 714,000 square feet of space at Grand Central Madison are only the most visible part of a project that also includes 40 miles of new track, 96 new switches, 550 miles of cables, 8,445 feet of retaining walls, five new railroad bridges, 296 new catenary poles, 51 signal towers, 2 million cubic yards of rock, soil and muck excavated, 1 million cubic yards of concrete poured, and tunnel ventilation plants with emergency exits every few blocks. Together with the successful Third Track project and L Train rehab, what was accomplished since the 2018 overhaul of East Side Access proves the MTA is a megaproject leader."

LIRR Interim President and Metro-North President Catherine Rinaldi said, "We are so excited to welcome the first generation of LIRR customers who will now have a choice about whether to go to the west side or the east side. This is the dawn of a new era for the railroad, no less important than then opening of the LIRR's service to Penn Station in 1910. So much work went into making this opening happen so I would like to thank every LIRR employee who worked tirelessly to make this a reality. It would not be possible without their dedication."

MTA Construction and Development President Jamie Torres-Springer said, "To open Grand Central Madison—a 714,000 square foot terminal underneath the already iconic Grand Central Terminal—required both sweeping vision and attention to detail. Our project teams had both as they kept the project moving and worked through issues big and small, including the final systems testing to ensure we were ready for revenue service. Thanks to their hard work and dedication, today we deliver a transformative new space and service for LIRR riders."

Grand Central Madison is the first new major downtown rail terminal in the United States in 67 years and the first expansion of the LIRR in 112 years, since service began to Penn Station on September 8, 1910. The terminal provides Long Island with service to both sides of Manhattan for the first time. The space includes two prominent permanent artworks by internationally renowned artists. An 875-square-foot abstract and figurative glass mosaic by Yayoi Kusama entitled A Message of Love, Directly from My Heart unto the Universe is located on the Madison Concourse at the main ticketing area, between 46th and 47th streets. Four glass mosaics by Kiki Smith totaling approximately 600 square feet will bring nature inspired by Long Island to the Mezzanine level, and a fifth mosaic by Smith on the Madison Concourse totaling 800 square feet was inspired by the way sunlight glints off the surface of the East River.

Infrastructure is all about connections, and this project is an extraordinary step forward to better connect millions of New Yorkers with their homes, their families and their jobs.

The beginning of service now enables the possibility of transferring directly between the LIRR and Metro-North Railroad. To encourage riders from each railroad to try the other, when full LIRR service begins to Grand Central Madison, the MTA will introduce the "Combo Ticket" - a single ticket that enables customers to travel between Long Island, Manhattan's northern suburbs and Connecticut all with one fare.

The Combo Ticket will enable riders to buy a LIRR ticket in Huntington for a trip to White Plains or a Metro-North ticket in Poughkeepsie for a trip to Montauk. Riders choose their origin station with Grand Central as their destination and pay the regular fare plus a flat rate of eight dollars for a continuing trip to any destination on the other railroad. The Combo Ticket will go into effect once the Grand Central Madison timetables are implemented.

The Grand Central Madison systemwide timetables are expected to include 274 more trains each weekday than currently operate, a historic 41 percent service increase made possible in part by the completion on October 3 of a new 9.8-mile Main Line third between Floral Park and Hicksville. The timetables represent the first comprehensive rewrite of LIRR schedules in decades and the MTA encourages all riders, no matter when or where they travel, to review their options on the TrainTime app or review the LIRR's service overview to see new options for their travel. 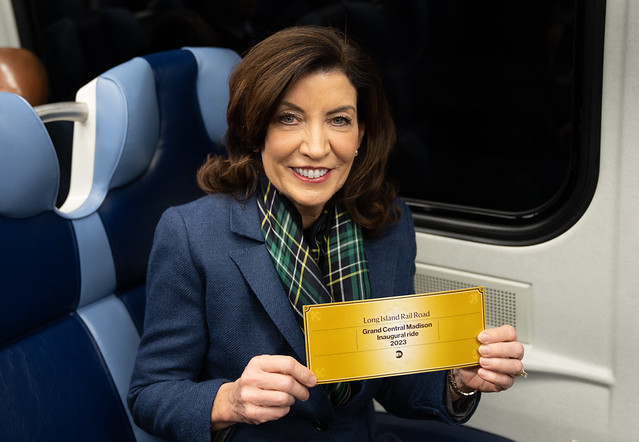 Grand Central Madison and Main Line Third Track are part of an unprecedented $17.7 billion investment to transform and modernize the Long Island Rail Road with 100 projects throughout the system including construction of a more spacious LIRR Concourse at Penn Station with a new entrance at 33rd Street and Seventh Avenue, renewal and upgrading of 36 stations and 17 bridges, elimination of eight at-grade railroad crossings, activation of the Positive Train Control safety system, installation of 13 miles of second track between Farmingdale and Ronkonkoma, upgrades to 15 electrical substations, parking capacity increases, and yard expansions.

Additionally, following the opening of Moynihan Train Hall in 2021, the MTA, together with Empire State Development, NJ TRANSIT and Amtrak, is transforming Penn Station into a world-class, single-level terminal with abundant natural light, high ceilings, increased access to platforms, and enhanced wayfinding.