First Sessions to Take Place in Suffolk and Broome Counties

Governor Kathy Hochul today launched a statewide listening tour on the future of farming in New York State. A series of listening sessions will allow the State to hear directly from farmers about their priorities in addressing climate, workforce, and economic challenges, and will help inform the State's federal priorities for critical funding and policy changes in the areas of agriculture, nutrition, and the environment. Kicking off the listening tour, Governor Hochul visited Bruno Farm in Suffolk County and held a roundtable session with stakeholders at Long Island Farm Brewery/Water Drinker Family Farm to hear from farmers about their successes and concerns. The Governor and Lieutenant Governor will be continuing the tours across the State in the coming months, in conjunction with Listening Sessions held by Agriculture Commissioner Richard A. Ball, with several stops scheduled to ensure that the farming community statewide has a chance to make their voices heard.

"New York's agricultural industry is essential to our economy, our communities, and our way of life, and we want to make sure we put a special emphasis on farms as we continue to recover from the pandemic," Governor Hochul said. "Our farms have always been here for us, and we need to be there for them, and these listening sessions will help us navigate the challenges and opportunities in the agricultural community. My message to New York's farmers, and to all New Yorkers, is this: I am here to listen to you, to support you, and to take action on the issues that are important to you."

"It is critical that New York works with our farmers to ensure a viable and sustainable future for our agriculture industry," said Lieutenant Governor Antonio Delgado. "During my time in Congress, one of my biggest priorities was working with our state's farmers and advocating for support from the federal government in both funding and policy. Listening sessions are a great way to hear directly from farmers about their accomplishments and concerns, and discuss steps we can take to help improve the agriculture industry."

The statewide listening tour provides an opportunity for state officials and agricultural industry leaders to engage with and hear from constituents about the importance of the 2023 Farm Bill to New York State, and how it will help to grow and sustain New York farms. Hosted jointly by the New York State Department of Agriculture and Markets (AGM) and fellow state agencies, the tour began in Riverhead, Suffolk County today at Suffolk County Community College. Commissioner Ball was joined by New York State Department of Health Executive Deputy Commissioner Dr. Eugene Heslin and New York Farm Bureau representatives.

Additional sessions held across the state will be announced in the coming weeks. Written comments can be submitted to [email protected].

Our farms have always been here for us, and we need to be there for them, and these listening sessions will help us navigate the challenges and opportunities in the agricultural community.

State Agriculture Commissioner Richard A. Ball said, "The Farm Bill has a tremendous impact on all sectors of our agricultural community here in New York State, and we want to hear from our partners and stakeholders about what is important to them. As we in Albany prepare to advocate for our farmers during this upcoming Farm Bill season, we take the comments we hear very seriously and will use them to inform our policy priorities. I encourage everyone to join us at one of the sessions announced today or join us for the remainder of the summer and into the fall as we travel across our great state to hear from you."

State Senator Michelle Hinchey said, "New York farmers need a real seat at the table in all rooms where big industry-defining issues are being discussed that will have broad-sweeping implications for agriculture at large. These listening tours are an important opportunity for our ag community to have a voice in the profoundly important process of crafting a 2023 federal Farm Bill that works for small-to-mid-sized New York farmers, especially within a national landscape that all too often prioritizes big ag. I look forward to hearing from a wide range of stakeholders whose testimony will help strengthen our fight for a federal Farm Bill that reflects New York State's priorities."

Assemblymember Donna Lupardo said, "These listening tours are an excellent opportunity for us to hear directly from stakeholders most impacted by state and federal agricultural policies. The feedback gathered will allow New York to develop our Farm Bill priorities making sure that ongoing funding and policy challenges are addressed. I am looking forward to this being widely attended so that many perspectives can be heard."

New York Farm Bureau President David Fisher said, "The Farm Bill provides critical funding for a number of essential programs that farmers depend on, including risk management support, conservation assistance, and needed research. We encourage farmers to attend the listening sessions to help the New York State Department of Agriculture and Markets prioritize the needs of our diverse agricultural community. New York Farm Bureau thanks Commissioner Richard Ball and his team for hosting the listening tour to hear first-hand what our farmers value in the Farm Bill." 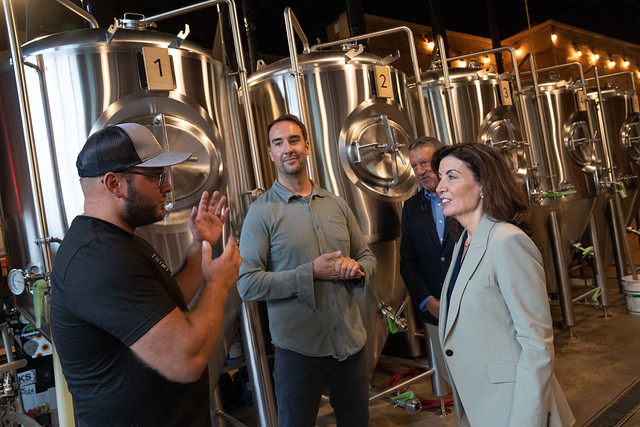 Feedback gathered during the tour will be provided to help develop New York State's policy agenda on the future of farming as well as the State's priorities for critical funding and policy changes during the 2023 Farm Bill renewal conversations.

The Farm Bill is an omnibus, multi-year law that governs an array of agricultural and food programs. The most recent Farm Bill, the Agricultural Act of 2018, expires at the beginning of 2023.

Agriculture is a major driver of the New York State economy and just over a quarter of New York State's land mass, or 7 million acres, is dedicated to farmland. Nearly 33,000 family farms produce some of the world's best food with the State ranking in the top 10 in 30 different commodities that support its communities. New York is the largest producer of cottage cheese, sour cream, and yogurt in the United States; The State ranks second in maple syrup, apples, and cabbage; third in grapes; and fourth in floriculture. It also ranks fifth in green peas, squash, and milk production, which is the largest segment of the state's agricultural sector. Nearly 3,500 dairy farmers produce 15.5 billion pounds of milk annually in New York State.