Governor Kathy Hochul today unveiled a new memorial honoring New York's fallen highway workers at the 2021 Great New York State Fair. The memorial, located near the midway entrance and west of the Horticulture Building on the fairgrounds, honors all transportation workers killed while performing their job duties on or near New York's thousands of miles of highways, including State Department of Transportation and Thruway Authority employees, municipal highway workers, contractors, consultants and towing service employees.

"This memorial honors the hardworking New Yorkers who put their personal safety on the line to build our bridges, pave our roads and maintain our infrastructure so the rest of us can reach our destinations safely," Governor Hochul said. "This will serve as a lasting tribute to all those who lost their lives while performing their duties, and as a reminder that these dedicated workers are out there every day making our roads and bridges safer. We owe them all a debt of gratitude."

According to the federal Bureau of Labor Statistics, from 2003-2017, 1,844 workers lost their lives at road construction sites across the United States, averaging 123 per year.  The State Department of Transportation alone has lost 56 workers during its existence.

The new memorial includes a centerpiece featuring a bronze sculpture of shovels, hard hats and boots on a platform surrounded by four bronze traffic cones and a dedication plaque. It features paved walkways and seating for respectful reflection.  Shrubs and trees have also been planted around the centerpiece and along the outside of the memorial.

State Department of Transportation Commissioner Marie Therese Dominguez said, "This memorial is a lasting tribute to the many highway and transportation workers who have made the ultimate sacrifice in service to the public.  We are forever grateful to the women and men who construct, operate and maintain our roadways and this new memorial will serve as a lasting reminder to all New Yorkers of the work they do and the dangers they face to keep all of us safe.  Our thanks to Governor Hochul and the Great New York State Fair for their help making this memorial a reality. And please, when you're driving through a highway work zone, put down your phone, keep your eyes on the road, slow down and above all, pay attention - lives depend on it. "

Thruway Authority Executive Director Matthew J. Driscoll said, "We must never forget the men and women who have lost their lives while working to make our roads safer. I would like to thank Governor Hochul, DOT and the New York State Fair for their support and for making this touching tribute a reality. Highway workers risk their lives each day to maintain and improve our roadways, and this memorial is a true reminder of their dedication and sacrifices. Help to make our highways safer by staying alert and slowing down when you see emergency lights."

This memorial honors the hardworking New Yorkers who put their personal safety on the line to build our bridges, pave our roads and maintain our infrastructure so the rest of us can reach our destinations safely

State Police Superintendent Kevin P. Bruen said, "Each day, highway workers contend with dangerous conditions while performing essential work to maintain New York's roads and bridges for our safety.  The State Police recognizes the sacrifice of those highway workers who have lost their lives in performance of their duties. The new memorial serves as a fitting tribute to their service and a reminder for all to put safety first when you're behind the wheel."

New York State Fair Director Troy Waffner said, "This memorial is a beautiful and poignant tribute to the lives of the men and women who died while keeping our roads and bridges safe. We are honored to be its home. Hundreds of thousands of New Yorkers will see this monument each year and be reminded to do their parts to protect our essential highway workers." 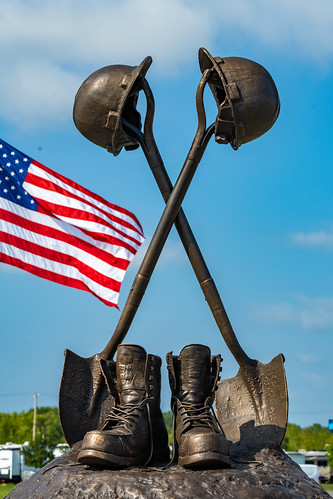 DOT works year-round to enhance safety for its workforce. Portable rumble strips that precede work zones and prevent distracted driving are now being utilized in every region of the state for maintenance and contractor project work zones to better protect flaggers and transportation workers. Work zone cameras are also being implemented in DOT maintenance work zones and contractor project work zones across New York to better protect transportation workers.

This year, the Thruway Authority is deploying more than a dozen new trucks throughout its four maintenance divisions across the state featuring enhanced technology focused directly on improving work zone safety. The vehicles include large radar board displays that alert motorists of the work zone speed limit compared to their approach speed, directional arrows, traffic attenuators, and wider reinforced man buckets with swing gates to allow for easier and safer deployment or removal of cones and barrels.

Today's unveiling comes as New York State Police and local law enforcement agencies are writing tickets in record numbers to crack down on motorists who flagrantly disobey vehicle and traffic laws in highway work zones as part of Operation Hardhat. Last year, 1,770 tickets were issued by State Police during "Operation Hardhat" activities, which surpassed 2019's total by nearly 70 percent.  Already this year, troopers and local law enforcement agencies have issued more than 1,600 tickets under the initiative.