Governor Kathy Hochul today joined elected officials and leaders from the Metropolitan Transportation Authority to tour the site of the Second Avenue Subway expansion that would extend the Second Avenue line to 125th St in East Harlem. The Infrastructure Investment and Jobs Act signed by President Joe Biden provides $23 billion in new grant opportunities for transit expansion, a historic level of funding that doubles the amount of grants available for major projects like Phase 2 of the Second Avenue Subway. The MTA has submitted a grant request to the U.S. Department of Transportation for Phase 2 of the expansion that will include the construction of three new subway stations, at 106th St, 116th St, and 125th St in East Harlem.

"New Yorkers dream big and act big, and the plan for Phase 2 of the Second Avenue subway expansion unlocks our incredible potential to give communities the transportation infrastructure and equity they will need to compete economically," Governor Hochul said. "I want to thank Senate Majority Leader Schumer, Senator Gillibrand, Congressman Espaillat and our Congressional delegation for their tireless work to secure the resources that can help us deliver for East Harlem a project that was promised decades ago."

Approximately 70 percent of East Harlem residents use public transportation to get to work, much higher than the citywide average of 55 percent. The expansion of Second Avenue Subway would help advance the Biden Administration's and New York State's goal for transportation equity and would improve the local community's access to jobs, health care, and other services, while reducing congestion on Lexington Avenue and improving air quality.

MTA Acting Chair and CEO Janno Lieber said, "Expanding the Second Avenue Subway has been talked about for decades, and thanks to the billions of dollars coming to New York in the infrastructure package, we can finally stop talking and start doing. The MTA is ready to move forward on this project that will greatly benefit East Harlem, an underserved community that heavily relies on mass transit to get to work and school. It will also alleviate congestion on the Lexington Avenue Line, which serves more riders daily than Boston, Chicago and San Francisco's rail systems combined."

Phase 1 of the project extended the Q line from 63rd St to 96th St and was New York City's biggest expansion of the subway system in 50 years. Service opened on January 1, 2017, with additional stations at 72nd St and 86th St. Since its completion, the Second Avenue Subway has carried more than 130 million passengers and carried more than 200,000 passengers on a pre-pandemic day. The tunnel segment that will be used for Phase 2 was built in the 1970s from 110th St to 120th St along Second Avenue.

New Yorkers dream big and act big, and the plan for Phase 2 of the Second Avenue subway expansion unlocks our incredible potential to give communities the transportation infrastructure and equity they will need to compete economically.

Congressman Adriano Espaillat said, "The Infrastructure Investment and Jobs Act will revitalize our nation's crumbling transportation infrastructure; having a tremendous impact on projects across New York City and State, including in my congressional district. One of those long-awaited projects is the Second Avenue Subway Phase II extension, which is currently pending Federal Transit Administration (FTA) approval" said Congressman Adriano Espaillat (NY-13). "I am delighted to be joined by Governor Hochul and the MTA during today's tour of this major transit project that will have a transformative impact on my constituents and residents across New York City and the state - and tout our collective efforts to make transit safer and more accessible for all across our region."

Congressman Jerrold Nadler said, "I am thrilled to join Governor Hochul and leaders from across the city in touring the Second Avenue subway tunnel construction. This project and many others wouldn't be possible without the funding allocated by the Infrastructure Investment and Jobs Act, which I passed alongside my Democratic colleagues in the House. This legislation provides more than $10 billion to New York for critical infrastructure projects to expand our mass transit network, improve transit options, including bus & bike lanes, and invest in our communities. When the Second Avenue expansion is complete, it will help thousands of working families underserved by transit get around safely and effectively." 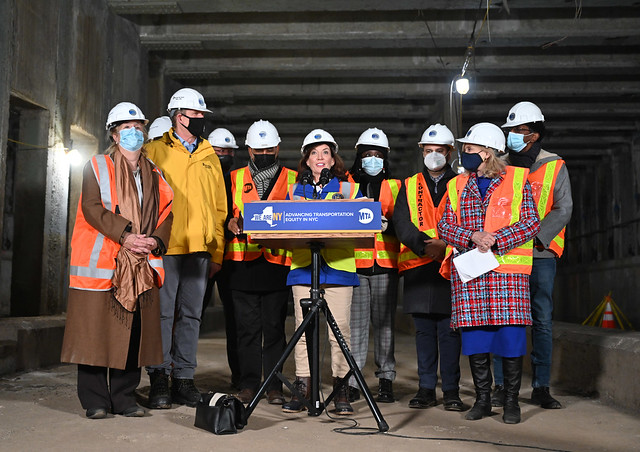 Congresswoman Carolyn Maloney said, "Phase 2 of the 2nd Avenue Subway will serve New Yorkers from 96th to 125th Streets, connecting East Harlem to midtown, lower Manhattan, and Brooklyn. It will create jobs and generate economic growth. I was proud to lead the effort to build Phase 1, and I look forward to working with Governor Hochul, Janno Lieber, and Congressman Adriano Espaillat to see Phase 2 completed."\

Senator José Serrano said, "The long-anticipated expansion of the Second Avenue Subway will drastically improve quality of life for thousands of New Yorkers who live, work, or attend school in East Harlem. As New Yorkers return to the subway, Phase 2 can bring much-needed relief from overcrowded trains and lack of access to the Lexington Avenue line. I'm pleased that this project will be able to take advantage of new federal funding, and I thank Governor Hochul and Congressman Espaillat for their commitment to transportation equity in New York City."

Senator Elect Cordell Cleare said, "I am ecstatic that this long awaited project is finally being undergone in Harlem. This will bring economic opportunities to the neighborhood and will connect Harlem residents with west Chester and the rest of the city. Thank you to Governor Hochul for finally making this old promise come true and vastly improving the lives of those in the Harlem community."

Assemblymember Al Taylor said, "I am delighted to see the federal funds be put to good use in my home community of Harlem. This much needed extension will make the lives of my constituents in the 71st district easier, faster, and more pleasant. I am grateful to Governor Hochul for ensuring that phase 2 of this project presses on and I am looking forward to seeing its completion."

Assemblymember Rob Rodriguez said, "This is New York City's biggest expansion of the subway system in more than 50 years and will expand service on Second Avenue in the Upper East Side into East Harlem. The second phase of the project, between E 125th and E 96th Streets, was allocated by the state $1.035 Billion to Phase 2 of the Second Avenue project to expand services into East Harlem, with the goal of creating transit equity, as our community relies on quick access for their daily lives. The Lexington Avenue line of the New York City Transit is one of the busiest transit lines in the country. This expansion of the Second Avenue line will allow convenient transfers to other subway and commuter rail lines- facilitating faster and smoother transportation across the city and region. The three new stations along with the first phase of the project will increase ridership by 300,000 riders daily. These new stations will allow East Harlem residents and visitors a one-seat ride to Midtown and a connection to the other parts of the city."

Manhattan Borough President Gale A. Brewer said, "Phase II of the Second Avenue Subway is arguably the most important infrastructure project in the borough of Manhattan currently. Not only will it critically provide for quicker transit times in the East Harlem community and reduce congestion on the Lexington Avenue line, but it will generate hundreds of direct and indirect jobs, which should primarily go to the same East Harlem community. Congratulations to our state colleagues, including Governor Hochul, for ardently advocating for this project and to our federal colleagues for supporting funding, notably through the Bipartisan Infrastructure Bill (BIF)."

Councilmember Diana Ayala said, "I am delighted to hear of the commencement of phase two of the Second Avenue Subway. The designated funding from the recently approved infrastructure bill will create increased accessibility and a more efficient transit system. This expansion will enable thousands of constituents to have a timely commute to and from their offices; enhance children's school travel; and heighten tourist visits to our beloved East Harlem community. I want to thank Senator Schumer, Congressman Espaillat and Governor Hochul for their tireless efforts and advocacy in making this happen."