"The completion of the Taystee Lab Building is a milestone in the next chapter of Harlem's rich history," Governor Hochul said. "Anchoring the Manhattanville Factory District, the new state-of-the-art building will serve as the home for innovative companies developing the next generation of life science research and technology. As we continue to build back from the pandemic, today's investments that support our life science infrastructure will ensure that we are better prepared, better equipped and more resilient in the future."

"Back in May of 2019—when the Governor and I were at the groundbreaking for the Taystee Lab Building in our former capacities as Lieutenant Governor and State Senator—we could not anticipate just how pertinent and necessary this investment would become," said Lieutenant Governor Brian Benjamin. "Now, as we dare to meaningfully rebuild the state's economy, it's only natural that we invest heavily in our health workforce and infrastructure. Today's ribbon cutting represents exactly the types of investments government should be making to ensure our recovery is an equitable one. As we rebuild and reopen in time for summer, we must strive for a New York that benefits the full diversity of people who call this state home. It's the only way to ensure New York reemerges stronger, fairer, and healthier than ever before."

Recognizing the importance of creating the infrastructure to support the growing life sciences industry in New York State, this project was identified as a priority project by the New York City Regional Economic Development Council and awarded a $10 million Empire State Development grant.

The Taystee Lab Building sits at the heart of the West Side's energy, culture and charm along the world-famous 125th Street corridor of Harlem and near the arts and entertainment district of the Apollo Theater, Studio Museum and the educational and research prowess of the world-renowned City College and Columbia University.

The Taystee Lab Building will serve as the anchor of the Janus Property Company's Manhattanville Factory District, a master-planned design of more than one million SF across a mix of commercial and community uses in an expansive outdoor campus of greenways that has been featured in Architectural Digest. The Manhattanville Factory District includes a multi-building campus stretching from West 125th Street to West 128th Street and bridges Columbia University's new Manhattanville campus and CUNY's City College, with ready access to Mt. Sinai Morningside and Columbia University Medical Center. Five buildings comprising approximately 700,000 RSF are already complete, including the Sweets Building, the Malt House, and the Mink Building, which are already home to a diverse range of life sciences, arts, culture, commercial, and retail tenants - both for-profit and not-for-profit.

Empire State Development Acting Commissioner and President and CEO-designate Hope Knight said, "New York's ongoing investment in the growing life sciences industry is critical towards advancing our public health and the statewide economy. The COVID-19 pandemic has highlighted the need for resources to be manufactured here and the importance of building the necessary infrastructure across the state to prepare us for future crises. The Taystee Lab Building will not only add to the vibrancy of Harlem with economic opportunity and job creation, it will also build out our life sciences ecosystem that will continue to advance New York's position as a leader in the life sciences industry."

As we continue to build back from the pandemic, today's investments that support our life science infrastructure will ensure that we are better prepared, better equipped and more resilient in the future.

Principal of Janus Scott Metzner said, "West Harlem has become today's premier destination for life sciences tenants in New York City. We appreciate the leadership and foresight of New York State and the Governor in helping make this a reality. The Taystee Lab Building and our other projects in the District will continue to drive forward the concerted efforts of the City, State, businesses, not-for-profit and academic communities, along with the neighborhood, to grow New York's dynamic uptown economy."

Principal of Janus Jerry Salama said, "New York is a leader in available STEM talent. Taystee and the District as a whole offer life science and STEM leaders a singularly dynamic destination in a diverse interdisciplinary commercial area in Harlem's West 125th Street arts and science corridor. There isn't another life sciences space that offers a better creative energy or a better location to attract and retain top talent in New York City."

Representative Adriano Espaillat said, "The Taystee Lab is an exciting development for our community and will become a cornerstone of innovation throughout my congressional district for years to come. Continued support for STEM is more crucial than ever and investing in life sciences and developing technology is an investment in the minds of our future leaders. The state-of-the-art Taystee Lab connects our community seamlessly with life sciences, arts, and commercial and retail hubs. I look forward to see all the ways this space will help promote discovery, innovation and collaboration."

State Senator Cordell Cleare said, "After hardship brought on by the COVID-19 pandemic, the Taystee Lab serves as a beacon of hope for better days to come. Rebuilding our economy is crucial and I want to thank Governor Hochul for her dedication in getting New Yorkers back to work, providing opportunities for small Black-owned businesses, and proving to businesses that here is the right place to be. I look forward to seeing the benefits of today's announcement come to fruition for the residents of Harlem and all New Yorkers."

Assemblmember Inez E. Dickens said, "With the development of the Taystee Life Sciences Lab in the center of the economic hub of Harlem-West Harlem, the growth of our Village is assured to continue providing our future a significant place in the ever-evolving high tech world." 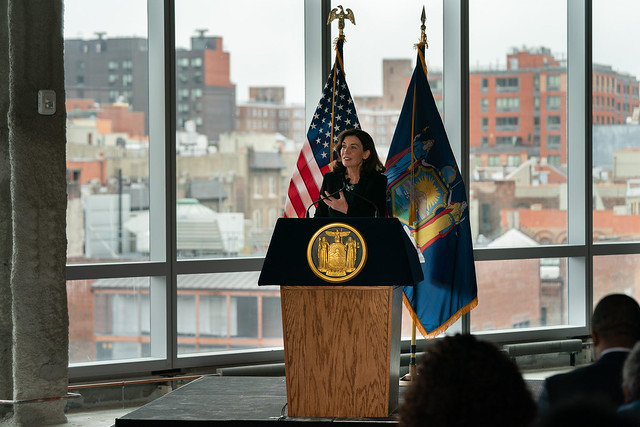 Manhattan Borough President Mark Levine said, "The Taystee Lab Building is a welcome addition to Manhattanville and an excellent revitalization of the former factory district," said Manhattan Borough President Mark Levine. "This mixed-use facility will contribute to breakthroughs in the life sciences, much-needed green space, and a more vibrant commercial life in the neighborhood, all made possible by the Empire State Development grant."

Council Member Gale A. Brewer said, "I congratulate Governor Kathy Hochul and the Empire State Development Corporation for their decisive support of the Taystee Lab Building that has been preserved and repurposed. I supported this project from its inception and am proud that this multi-purpose facility was built with union labor as well as community involvement, and that it achieves both high environmental standards and provides for state-of-the-art infrastructure for life sciences. Also, it is rare that a developer creates a masterplan for an urban mixed-use commercial district that is anchored by 20,000 square feet of open greenway space, and, in this case, is available to residents of Harlem as well as to the office tenants. The Janus Property Company deserves our profound gratitude for completing a remarkable project that will enhance the community, create life sciences jobs, and support locally based entrepreneurs in the retail spaces. I am delighted that Governor Hochul is highlighting and celebrating one of New York's best developers and their lab building which is so important to the growing life sciences industry in New York State."

New York City Regional Economic Development Council Co-Chairs Winston Fisher, Partner at Fisher Brothers, and Félix V. Matos Rodríguez, CUNY Chancellor, said, "The NYCREDC is proud to support the brand new Taystee Lab Building, which will be an important addition to the growing life science industry in New York City and the ongoing vibrancy of Harlem. Taystee Lab reimagines the spirit of the building's history as a dynamic and purpose-built life science development that will invigorate the neighborhood, bring jobs to the area, and showcase Harlem as the in-demand place for top-tier life sciences talent."

New York City Economic Development Corporation's Senior Vice President of Life Sciences and Healthcare, Susan Rosenthal said, "New York City Economic Development Corporation saw the opportunity to redevelop the former bread bakery and turn it into a place of innovation and job creation. More than a decade ago, we asked for proposals and selected developer Janus Property Company, and then sold them the property because NYCEDC knew they would transform the Taystee Lab Building and make it a game-changer for life sciences and the Manhattanville area. I want to thank the City, State and especially Governor Hochul for their support and all involved who helped in getting this project across the finish line."