SLA Upgrades Include More Staff, Less Time to Get Businesses Up & Running

Governor Kathy Hochul today announced efforts to support the recovery of New York restaurants and bars, including the proposal to permanently legalize to-go drinks, and to ensure a more efficient State Liquor Authority. The Governor highlighted these proposals and actions at an event at Therapy Wine Bar 2.0, a Brooklyn business that was able to open thanks to a law signed by the Governor in December to allow for temporary permits to serve alcohol. Governor Hochul also announced proposals to update the state’s liquor laws and to fund operational improvements at the State Liquor Authority to revitalize the state’s multi-billion-dollar hospitality industry, one of the industries hit hardest by the pandemic. To ensure SLA's policies are as smart, efficient, and effective as possible, Governor Hochul additionally directed SLA to consult with industry representatives and stakeholders to review existing laws and identify red tape.

“New York's nightlife and hospitality industry are second to none, and our state cannot truly come back from this pandemic until we revitalize this crucial sector of our economy and the hundreds of thousands of jobs it provides," Governor Hochul said. "We owe it to our small businesses to provide them with the resources and regulatory framework they need to grow and thrive, which is why is it's important that we reform and modernize the State Liquor Authority. This is just one of several steps we are taking to help small businesses come back from the pandemic stronger than ever before."

Aspects of the multifaceted approach to revitalizing New York’s hospitality industry contained in the Governor’s recent budget proposal include:

Increased Funding to Get Businesses Open Quickly:  As New York’s hospitality industry was among the hardest hit by the pandemic, Governor Hochul has made opening businesses quickly a top priority. The Governor has proposed adding $2 million in spending to the SLA’s budget to include the hiring of over 30 full-time employees. Flat and reduced budget and workforce numbers over the years have had an impact on the SLA’s efforts to significantly reduce processing times – which currently stand at 20-26 weeks. A bar or restaurant without a temporary operating permit must either wait for its license before opening, or open without alcoholic beverage service, which represents as much as a third of its revenue. With the influx of resources the Governor has proposed, the SLA will be able to trim months off of current processing times. Giving these months back to the businesses will allow them to generate revenue and hire staff sooner to better serve their neighbors and communities.

Streamlining the Application Process: The Governor’s budget also proposes cutting red tape to expedite the application process by eliminating burdensome and over-inclusive requirements currently required by law for applicants. Extensive review by the SLA of licensing procedures determined time-consuming requirements, such as citizenship documentation and requiring financial documents and personal information from minority stakeholders, provide little value in licensing decisions and public health and safety, and create needless barriers to obtaining a license.

To-Go Drinks: The Governor’s budget also proposes, as a key part of her Billion Dollar Rescue Plan for small businesses, permanently bringing back to-go drinks for restaurants. This policy provided a vital economic lifeline to our bar and restaurant industry during the pandemic, and reestablishing it, under proper limitations, will help to ensure our bars and restaurants get back on their feet and thrive.

Modernizing the SLA:  As the agency charged with overseeing approximately 70,000 licenses and permits statewide and processing tens of thousands of applications annually, it is imperative the SLA continues to modernize and streamline its operations. The Governor’s Budget continues funding for a comprehensive overhaul of the SLA’s decades-old licensing and compliance databases. The current process requires mailing paper applications to the SLA, then scanning and logging, before they can be sent to an examiner for review. This and other processes can be handled more efficiently by computer programs. Under a new system, set to go live this year, applications and payment will be submitted electronically, eliminating the need for snail mail service and manual data entry, thus eliminating many deficiencies in applications which lead to longer review times.

New York's nightlife and hospitality industry are second to none, and our state cannot truly come back from this pandemic until we revitalize this crucial sector of our economy.

The Governor also highlighted a number of recent legislative changes and administrative policy updates implemented by the SLA to support the state’s economy:

Temporary Permits to Expedite Business Openings in New York City: On December 21, 2021, after negotiating an agreed-upon expansion with the Legislature, Governor Hochul signed a bill allowing new restaurants, bars, and grocery stores in New York City to be eligible for a temporary operating permit for the first time. These permits, already implemented by the SLA, are allowing these previously ineligible businesses to be open and operating for alcoholic beverage sales typically in less than 30 days.

Temporary Permits for Craft Manufacturers: The Governor signed another bill on December 21, 2021, crafted by the SLA, to provide new permits for craft beverage manufacturers to serve and manufacture alcoholic beverages while their full licenses are pending. These permits, effective later this month, will allow craft manufacturing businesses to start operating and bringing in revenue in a matter of just a few weeks, ensuring New York, which now ranks in the top five in the U.S. for its number of craft beverage producers in every category, remains a leader in the craft beverage industry.

Movie Theaters: On January 19, 2022, the SLA issued a ruling that businesses operating movie theaters, another industry devastated by the pandemic, are now eligible to apply for a license to serve beer and wine to their adult patrons. Prior to this ruling, movie theaters were licensed only if they also meet the definition of a restaurant: service of full meals at tables inside the theater, which is impracticable for many theater operators and costly for all.

Lowering Costs for Bars and Restaurants: The SLA will be seeking to amend existing rules on fair limitations on “split case fees”: the extra fees charged to restaurants and bars who lack the cash flow, resources, and/or storage space to purchase full cases of the liquor and wine they sell to the public. These split case fees can be as much as $3 per bottle, a significant extra expense which has a disproportionate impact on smaller neighborhood bars and restaurants.

Increase Transparency: Governor Hochul has made transparency a top priority. As part of SLA's continued pledge to transparency, business friendliness, and community responsiveness, the SLA has added the following items to its long list of available public information: general processing times have been added to application receipts and website; Board minutes and Board item dispositions have been added to the Full Board record; and shortly, an estimated date of determination will be added to an applicant’s license application status. Additionally, the SLA has recently completely revamped its LAMP GIS mapping system and continues to work to refine its capabilities and data presentation. And as always, as the SLA moves forward, it does so with a focus on public access and accountability.

State Liquor Authority Chairman Vincent Bradley said, “The State Liquor Authority is proud to play a role in Governor Hochul’s continuing efforts to revitalize our state’s vital hospitality industry, an industry that has faced unprecedented challenges over the past two years.  By creating fast-tracked permits, cutting red tape, and providing resources to get new businesses open quickly, the Governor’s comprehensive strategy will ensure this industry will continue to be an economic engine for our state.” 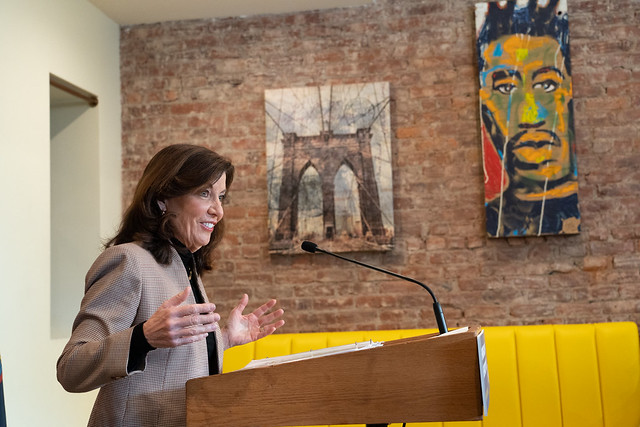 State Senator Jessica Ramos said, “Streamlining the state liquor authority’s temporary permitting process, bringing back to-go drinks, and the other relief measures outlined in the Governor’s proposal are exactly the shot in the arm New York’s hospitality industry needs. We can make things easier for small businesses and in turn, keep our commercial corridors vibrant. The warm weather is coming and the NYC Council is taking action to improve Open Restaurants, so I’m ready to do my part to get to-go drinks across the finish line.”

New York City Council Member Chi Osse said, “The COVID-19 crisis revealed the ways in which certain regulations were already stifling our small businesses. As the pandemic recedes, we can hold onto the lessons learned to allow our small businesses to thrive. I commend Governor Hochul for her leadership in this area and look forward to working together to protect, revitalize, and grow New York’s hospitality industry.”

President and CEO, New York State Restaurant Association Melissa Autilio Fleischut said, “Governor Hochul clearly understands the plight of the state’s hospitality industry and is working to expedite our recovery. These proposed reforms will go a long way toward improving business conditions as we are still dealing with the lasting impact of the COVID-19 pandemic. While we’re still not in the clear, we are optimistic about the future, and we value Governor Hochul’s leadership on issues like this and making drinks to-go permanent.”

Executive Director of the NYC Hospitality Alliance Andrew Rigie said, “New York’s restaurant industry has been devastated by the pandemic. That’s why smart policy like the temporary liquor license law is helping small businesses open much faster while creating new jobs, and why it’s necessary to reinstate the popular drinks to go policy that provides struggling businesses an important revenue stream while giving New Yorkers what they want, which is wine and cocktails for takeout and delivery from their favorite restaurants and bars. We thank Governor Hochul for enacting this important temporary liquor license law, Senator Ramos and Assemblymember Dickens for championing the legislation, and now we look forward to working alongside the Governor as she leads the way to bring back drinks to go, and provides the State Liquor Authority with support so they can best service new and existing businesses. Cheers New York!”

Empire State Restaurant & Tavern Association Executive Director Scott Wexler said, “Governor Hochul’s efforts to support New York’s restaurants and taverns are critical to returning the industry to its pre-pandemic levels of employment. These measures will allow businesses open their doors more quickly, generate new revenue for owners and workers, and will help restore the economic vitality in neighborhoods all across New York State.”

President, NYS Latino Restaurant Bar & Lounge Association Arelia Taveras said, “We applaud Governor Hochul for taking real and bold steps today to modernize and revamp the State Liquor Authority and strengthen its ability to serve the restaurant and business community with higher staffing levels and the implementation of electronic filing of applications. These measures along with the proposals the Governor put forth in her executive budget including To-Go Drinks and streamlining the application process will make a tremendous difference for new and existing restaurants and bars that are struggling to navigate the SLA process while trying to stay afloat during pandemic times."