Governor Kathy Hochul today, at the Museum of Jewish Heritage in Battery Park City, announced the availability of an additional $25 million to help nonprofit organizations improve the security of their facilities to better protect those at risk of hate crimes or attacks because of their ideology, beliefs, or mission. Available to those organizations that have not previously received state funding for this purpose, the allocation builds on nearly $43 million awarded today to 362 nonprofit organizations to help boost security infrastructure and enhance preparedness against potential hate crime attacks.

"By their very nature, hate crimes strike at the heart of our democratic values and threaten to undermine the very tenets of our society," Governor Hochul said. "By helping these nonprofit organizations protect themselves against these cowardly acts of violence, we continue to make public safety a top priority. Bigotry and hate have no place in our state, and we will do everything in our power to protect vulnerable people from those who would lash out against them due to their ideology, belief or mission."

In total, the state funding will support 872 projects across the state. These projects will bolster security at community centers, schools, museums, and day camps.

The announcement comes as hate and bias incidents continue throughout the state, many targeting Jewish and Asian American and Pacific Islander communities. While the number of hate crime incidents reported to police in the state represents a small fraction of total crime, these incidents are significant because they instill fear in the greater community of the victim.

By helping these nonprofit organizations protect themselves against these cowardly acts of violence, we continue to make public safety a top priority.

This fall, the Division of Criminal Justice Services will seek proposals for the $25 million, which is expected to fund approximately 500 projects across the state. Nonprofit organizations that previously received grants may apply for a new grant to bolster security at different facilities.

DCJS will accept applications for up to $50,000 per facility; each eligible organization may submit up to three applications for a maximum of $150,000. In addition, individuals who have been the victims of hate crimes can receive direct services, such as counseling, civil legal assistance, safety planning, advocacy, emergency shelter and transportation, from a network of 212 victim assistance programs funded by the State Office of Victim Services. 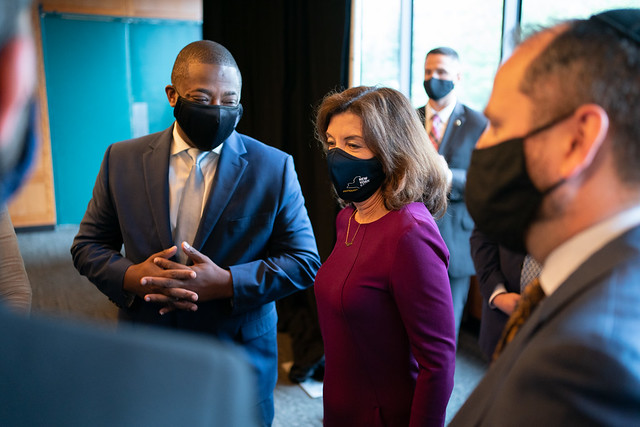 Created in 2017, the Securing Communities Against Hate Crimes Grant Program provides funding to strengthen security measures and prevent hate crimes against non-profit day care centers, community centers and cultural museums that may be vulnerable because of their ideology, beliefs, or mission. Since the program's inception, more than 500 such projects have been supported by $25 million in state funding.

The updated form collects information about the location, time, and nature of the incident, as well as the suspected bias motivation. Individuals using the form also have the option to provide additional information, including photographs, videos, or documents relating to the incident. The old version of the Hate Crimes Task Force's online reporting form did not collect a standardized set of data about each incident, and the new form will allow the Task Force to develop a more comprehensive picture of hate and bias incidents in New York State.

The new form is accessible on mobile devices and is available in English, as well as the ten languages covered by the recently expanded statewide language access policy: Arabic, Bengali, Chinese, Haitian Creole, Italian, Korean, Polish, Russian, Spanish, and Yiddish.

New York State Division of Homeland Security and Emergency Services Commissioner Patrick A. Murphy said, "New York is known for embracing and promoting diversity, however, there are individuals and groups who continue to threaten organizations based on their culture and beliefs. These funds allow nonprofit organizations to harden their facilities and increase security to help protect against hate crimes."

New York State Police Superintendent Kevin P. Bruen said, "Bias related crimes and discrimination are not welcome here in New York State and will not be tolerated. The safety of those we serve is our number one priority. With this funding, together, we will work to protect those who are most vulnerable and at risk to these types of crimes. We want to remind the public that the State Police will investigate, to the fullest extent of the law, anyone who attacks a person or group because of their ideals."

Senator Liz Krueger said, "The disturbing increase in hate crimes that we have seen across our city, our state, and our country in the last several years tears at the very fabric that binds our diverse society. Violence against those who are different from us has no place in a pluralist democracy. I thank Governor Hochul for providing additional support to nonprofits that are at risk, and for taking a stand against the rising tide of hate."

Senator Toby Ann Stavisky said, "The freedom to safely practice religion is one of the basic pillars of our country. This freedom needs to be protected, especially in response to pervasive disinformation campaigns, increased hate crimes and anti-Semitism that is a scourge on our society. I want to thank Governor Hochul for releasing this important funding so that these organizations can ensure they are protected from the threats of hatred."

Assemblymember Nily Rozic said, "As the steady surge of anti-Semitism across New York became an undeniable wave of hate, there is no room for complacency. I commend Governor Hochul for taking steps to prevent and address hate crimes in New York State. This new security funding and enhanced reporting form will go alongway to keep New Yorkers safe. We will continue taking action until it is incontrovertibly clear that New York will not tolerate hate."

CEO of UJA-Federation of New York Eric S. Goldstein said, "UJA-Federation of New York actively works to help ensure the safety and security of thousands of Jewish institutions. But philanthropy alone cannot address the current challenge, and we are deeply grateful for New York State's nonprofit security grant program. We thank Governor Hochul and the State for its $25 million grant program announcement, which will significantly enhance the welfare and safety of all New Yorkers."

Managing Director of Public Affairs, Orthodox Union Maury Litwack said,"Governor Hochul's actions today demonstrate her steadfast and strong commitment to combatting hate throughout the state of New York. We welcome this release of security funding and the additional grant funding which will help to protect New York families, communities and institutions."

The Division of Human Rights and State Police have also teamed up to produce a new public service announcement that will be run across several state agencies' social media platforms and on their websites.

Gideon Taylor, CEO of JCRC of New York, said, "The Jewish Community Relations Council of New York is deeply grateful to Governor Kathy Hochul for her efforts to release the Securing Communities Against Hate Crimes grants. At long last, hundreds of successful organizations, that submitted their applications in Spring, 2020, can use these funds to upgrade their security hardware, planning and training. Most importantly, the upgrades will help to protect thousands of New Yorkers.

Rabbi Yeruchim Silber Director of Government relations Agudath Israel of America said, "Agudath Israel has long been in the forefront of battling anti Semitismand all forms of hate. We commend Governor Hochul for her forceful actions today. These funds will with G-do's help, go a long way in protecting our vulnerable institutions."

Scott Richman, Anti-Defamation League NY/NJ Regional Director, said, "We were thrilled to be present for Governor Hochul's appearance today at the Museum of Jewish Heritage. The Governor's announced increase in funding for nonprofit hate crime security and a hate crime reporting system are essential steps for New York State in ensuring it becomes #NoPlaceforHate. We look forward to working with Governor Hochul and other stakeholders on security initiatives and addressing incident reporting."

Under New York State law, a person commits a hate crime when they commit a certain offense while selecting the victim because of a perception or belief about the victim's race, color, national origin, ancestry, gender, religion, religious practice, age, disability, or sexual orientation, or when they commit certain crimes because of such perceptions or beliefs. Hate crimes can be committed against individuals, groups of individuals, and public or private property.

There has been an exponential rise in hate and bias incidents targeting Asian Americans and Pacific Islanders in New York State and across the nation in the past year. One recent report has documented nearly 4,000 incidents across the nation since the inception of the COVID-19 pandemic in March 2020.

In March 2021, a virtual public forum hosted by the Division of Human Rights brought together community leaders to discuss the impacts of these attacks across the state. The 2022 Enacted Budget, signed in April 2021, contained millions of dollars in funding to support community organizations combatting discrimination against Asian Americans and Pacific Islanders.

The hotline, 1-877-NO-HATE-NY, is also available so New Yorkers can call to report a hate crime or if they have knowledge of a potential bias attack. To report other issues of bias or discrimination, visit the New York State Division of Human Rights website here, call 1-888-392-3644, or text HATE to 81336. If you fear for your safety or the safety of others, call 911 immediately.