Governor Kathy Hochul today announced that police agencies have removed 6,007 illegal guns from communities across New York State during the first seven months of the year, a 20 percent increase when compared to the same timeframe in 2021. Joined by New York City Mayor Eric Adams and Director of the Bureau of Alcohol, Tobacco, Firearms and Explosives (ATF) Steven Dettelbach prior to a meeting of the Interstate Task Force on Illegal Guns, Governor Hochul updated New Yorkers about her administration's comprehensive efforts to stem the flow of illegal guns, reduce gun violence and save lives. ATF Director Dettelbach touted the Task Force as a national model for other regions in the country to follow.

"My administration is laser focused on stopping the devastation caused by gun violence in communities across the state, and we continue to take bold action to face this crisis head on," Governor Hochul said. "This record number of gun seizures is the result of an unprecedented, nation-leading coordinated response among dedicated law enforcement professionals on the local and federal levels. I'd rather be in the crime prevention business than the crime solving business, and thanks to the first-of-its-kind Interstate Gun Task Force, that's exactly what we are doing together."

Bureau of Alcohol, Tobacco, Firearms and Explosives Director Steven Dettelbach said, "This Task Force has what is needed to make a difference- and ATF, through our Crime Gun Intelligence Centers, our eTrace crime gun tracing system, and NIBIN- is committed to providing our law enforcement partners the actionable intelligence and leads needed to identify the trigger-pullers who terrorize our communities and the firearm trafficking networks that illegally supply them with guns."

The Interstate Task Force on Illegal Guns has fostered significant cooperation and collaboration among local, state, and federal law enforcement agencies in Connecticut, Maine, Massachusetts, New Hampshire, New Jersey, Ohio, Pennsylvania, Rhode Island and Vermont since its creation earlier this year. Task Force members convened for the fourth time this morning to discuss data, intelligence, strategies and other tactics critical to their ongoing efforts to address the increase in gun violence that has occurred in New York and the nation since early 2020. The next meeting will occur next month in New Jersey.

My administration is laser focused on stopping the devastation caused by gun violence in communities across the state, and we continue to take bold action to face this crisis head on.

This work, coupled with record-level state investments in communities experiencing high rates of gun violence and improved information sharing among local law enforcement agencies and the State Police, has produced results. The 20 police departments participating in the New York State's Gun Involved Violence Elimination (GIVE) initiative also reported a 12 percent decrease in shooting victims for the first seven months of 2022 compared to 2021. The number of murders reported by those police departments has decreased for three consecutive months. In New York City through mid-August, there was an 11.8 percent decrease in shooting victims while reported murders decreased by 11 percent.

The State Police have seized 813 guns from January through July 2022, double the number seized during that time period last year (406). That total includes 30 illegal assault rifles and ghost guns seized after a months-long investigation by the State Police Gun Trafficking Interdiction Unit into a multi-county gun trafficking ring. The unit also conducted 482 gun-tracing investigations from January through June 2022, providing 91 leads that helped authorities in 25 states remove 149 illegal guns from their streets and communities. 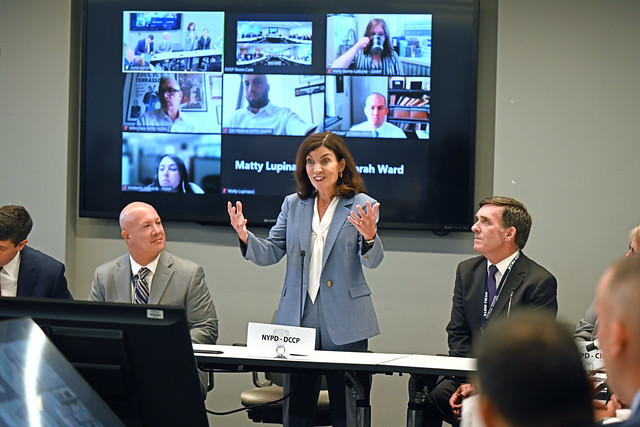