In Response to Anti-Abortion Laws in Texas and Across the Country, Governor Hochul Takes Aggressive Action to Cement New York State as a Safe Harbor for Those Seeking Abortion Care

In response to anti-abortion laws in Texas and across the country, Governor Kathy Hochul today announced an agenda to affirm abortion rights and cement New York's status as a place to welcome women seeking abortion care. Governor Hochul was joined by Senator Kirsten Gillibrand to lay out their combined efforts to fight for reproductive rights. As part of these efforts, the Governor is directing State agencies to coordinate a statewide public information campaign, including the development of a patient bill of rights, in coordination with stakeholders. This campaign will help women know their rights and legal protections and ensure this information is accessible and widely available. The Governor also directed the Department of Health to take immediate action to develop and widely distribute modern and comprehensive provider guidance on the right to provide abortion care and to ensure updates to existing regulations are adopted so that medication abortion can be more easily accessed during telehealth visits.

"Abortion access is safe in New York - the rights of those who are seeking abortion services will always be protected here," Governor Hochul said. "This plan will affirm that in our state, and leaders like Senator Gillibrand will fight on a national level. To the women of Texas, I want to say I am with you. Lady Liberty is here to welcome you with open arms."

Recognizing that national attention on abortion issues may make misinformation more likely to spread, the Governor also wrote a letter to Facebook urging the company to provide information on any current efforts to mitigate the spread of abortion misinformation online and to take new action to combat misinformation about abortion laws, regulations, and availability.

Senator Gillibrand said, "Having control over your own body and your own future is a basic human right. But that right is being threatened every day. The recent law in Texas - and the Supreme Court's refusal to block it - is dangerous and disturbing. This law is not just unconscionable, it's unconstitutional. At the federal level, we must pass the Women's Health Protection Act, which would create federal protections against state restrictions that fail to protect women's health and intrude upon personal decision-making. Here in New York, we luckily have a governor who understands and champions fundamental reproductive rights. I stand ready to support Governor Hochul's efforts to ensure that providers, patients and the people of New York have the best information about abortion care and the resources to get the care they need."

Representative Carolyn B. Maloney said, "The Supreme Court's failure to block the draconian Texas anti-choice SB8 law flies in the face of decades of precedent and is a major blow to Americans' constitutional right to an abortion. SB 8 makes it illegal to end a pregnancy under nearly all circumstances after 6 weeks — before most people even know they're pregnant. This devastating ruling by the highest court will most impact BIPOC and lower income individuals who often do not have the same access to health care or ability to travel out of state to access an abortion. The House has already voted to repeal the Hyde Amendment, and we must pass the Women's Health Protection Act.  Here in New York, I'm so proud to have a governor like Kathy Hochul, who I know will work each and every day to protect New Yorkers' reproductive rights."

New York Senate Majority Leader Andrea Stewart-Cousins said, "In New York, we have shown that we are ready to protect women's right to choose and access high quality reproductive healthcare," "I want to thank Gov. Hochul and all the partners involved in this campaign, for amplifying the message that in New York, we will continue to be the standard bearers for women's reproductive rights. With this campaign we are saying that in New York, women's health matters, women's decisions matter and the reproductive rights of ALL New Yorkers' and visitors alike are protected."

This plan will affirm that in our state, and leaders like Senator Gillibrand will fight on a national level. To the women of Texas, I want to say I am with you. Lady Liberty is here to welcome you with open arms.

Senator Liz Krueger, Co-Chair of Bipartisan Pro-Choice Legislative Caucus said, "For many years before we passed the Reproductive Health Act in New York, we were told by opponents of choice that it was unnecessary, because the Supreme Court would never overturn Roe v. Wade. And yet here we are: just two years after passing the RHA, a Court packed with radical extremists has upheld Texas Republicans' flagrantly unconstitutional forced-birth law. Opponents of reproductive freedom have made clear that their attacks on women will not let up, so neither can we. I thank Governor Hochul for taking a strong stand for the rights of women and families to make their own reproductive decisions without government interference."

Assemblymember Deborah J. Glick said, "Texas' draconian abortion ban is deeply disturbing, but not surprising. Despite a majority of Americans supporting a pregnant person's right to choose, anti-choice extremists continue to try to undermine our constitutional right to seek reproductive health care, including abortions. I have worked tirelessly to protect and strengthen reproductive rights, and I am proud to have led the charge to codify Roe v Wade in New York State state law in the Reproductive Health Act for just this eventuality. Texas' disgraceful law shows us why we must continue to fight to protect our right to choose."

Assemblymember Rodneyse Bichotte Hermelyn, incoming Chair of the New York State Assembly Task Force on Women's Issues said, "We cannot allow oppressive, anti-woman bans on our bodies to penetrate our state or nation. The GOP-led stripping of women's rights in Texas must be stopped. We need to protect women from the Court's inaction, which could jeopardize our reproductive rights everywhere. I am grateful to the Governor, Kathy Hochul, and Sen. Gillibrand for taking a stand to make sure these archaic laws never undermine our health care in the state of New York."

Assemblymember Kimberly Jean-Pierre, Chair of the Legislative Women's Caucus said, "Make no mistake, Texas's draconian new abortion law is an unconstitutional attack on the reproductive rights of women across our nation. Here in New York, we will always stand up for the right of women to make their own reproductive health choices, and under the leadership of Governor Hochul, I know that our state will continue to be a safe haven for women and their access to care in the face of this abhorrent assault on our fundamental rights to reproductive freedom."

Assemblymember Karines Reyes, Co-Chair of Bipartisan Pro-Choice Legislative Caucus said, "The abortion ban recently enacted in Texas is completely reprehensible. A women's right to an abortion is just that - a right - and in New York we will always do everything we can to protect a women's right to choose. I thank Governor Hochul for taking aggressive actions to affirm abortion rights in New York and making sure that every woman in New York knows her rights."

Manhattan Borough President Gale A. Brewer said, "While other states are cracking down on reproductive rights with needless and extreme laws, here in New York State Governor Kathy Hochul is taking action to ensure that we remain a beacon of hope. All reproductive health, including abortion must be legal, safe, accessible, and affordable. That's what today's announcement by Governor Hochul aims to promote."

Robin Chappelle Golston, President & CEO of Planned Parenthood Empire State Acts said, "Make no mistake - there is a national effort to destroy access to abortion in this country and we must be just as aggressive to expand reproductive healthcare. This is our moment, to not just hold the line on access to abortion here in New York, but to boldly advance it. Everyone deserves the freedom to control their own body, make personal decisions and shape their own future. I want to thank Governor Hochul for her shared and unwavering commitment to this vision, and for the steps she is taking to ensure New York remains a beacon of freedom and access for all."

Donna Lieberman, Executive Director of the New York Civil Liberties Union said, "We've done it before and we'll do it again: New York will open its doors to those in need of an abortion and stand up against any state that puts a bounty on reproductive freedom. In the face of Texas' blatantly unconstitutional attacks on abortion access, we applaud Governor Hochul's decisive action in partnering with experts and stakeholders to ensure New York is a haven state for all who need abortion care. We will not let Texas, or any other state that tries to follow suit, turn back the clock." 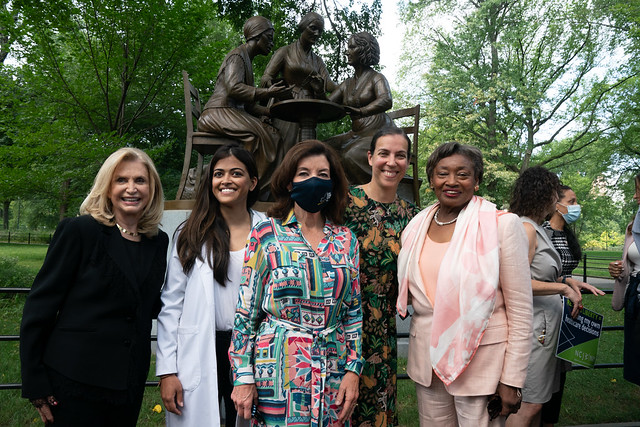 Camille A. Clare, MD, MPH, CPE, FACOG, chair of ACOG District II said, "In a time when women's reproductive healthcare is under attack across this country, the American College of Obstetricians and Gynecologists, District II is proud to stand with Governor Hochul as she prioritizes access to comprehensive abortion services. Abortion is health care and ACOG District II supports and uplifts the voices of the women seeking abortion services and the medical professionals who provide them. New York State must become a safe haven for anyone seeking abortion care and our medical leadership looks forward to partnering with the Governor and the Department of Health as they work to ensure a comprehensive and transparent system of abortion care here in New York."

Andrea Miller, President of the National Institute for Reproductive Health Action Fund said, "Texas has passed the most extreme abortion ban in the country, leading to a crisis point for abortion access. The NIRH Action Fund is pressing forward in every state and city we can to secure equitable access to abortion care -- because everyone who needs care should receive with it with support, with dignity, and without fear. We applaud Governor Hochul for taking bold action to ensure that New York State is doing all it can to ensure access to all New Yorkers and all those who travel here for care. We invite governors and legislators in states across the country to follow her lead."

DOH will convene a group of experts to develop and issue a guidance document on the provision of abortion care in New York State. This will include collaboration from American College of Obstetricians & Gynecologists, National Abortion Federation, National Institute for Reproductive Health, Planned Parenthood Empire State Acts, New York Civil Liberties Union and clinical providers with an expertise in abortion care. Webinar on guidance document and clinical considerations will be open to providers across New York State and recorded for ongoing availability on the DOH website.

Regulatory Updates
The Department of Health will enact regulatory updates including to allow for provision of services via telehealth. These updates will ensure that medication abortion is more easily accessed during telehealth visits, and with the goal of making this an option irrespective of the pandemic.