Governor Kathy Hochul today announced the acceleration of several significant projects along Buffalo's waterfront. Advanced funding from the New York Power Authority to the Erie Canal Harbor Development Corporation will jumpstart four major projects on the Outer Harbor and at Canalside. These projects complement recreation and transportation measures that will promote pedestrian access and continued equitable growth of the waterfront. This accelerated plan builds on more than a decade of progress spearheaded by ECHDC to restore 21 historic acres at Canalside and 200 acres on Buffalo's Outer Harbor that has resulted in more than $300 million in new development and over 1,000 annual events.

"We're writing Buffalo's comeback story, and it starts with tapping into the unlimited potential of our city, including parks, infrastructure and amenities," Governor Hochul said. "We're going to completely transform our waterfront into a destination for everyone to enjoy, and we're investing now to get these projects off the ground and finished earlier than expected. I thank Representative Higgins for prioritizing these projects and for his partnership to ensure that future generations of New Yorkers can enjoy all the natural beauty and recreational opportunities that our state has to offer."

At the direction of Governor Hochul, NYPA will advance Relicensing Agreement (RA) and Industrial Incentive Award (IIA) payments to ECHDC, which otherwise would have been due over the course of nearly a decade. The NYPA Board of Trustees approved the acceleration of RA payments in March and is expected to review the acceleration of IIA payments in September. As a result, ECHDC will have access to $54.2 million this year, which will accelerate planned projects along Buffalo's waterfront, in some cases by as much as 3 years. ECHDC has identified Wilkeson Pointe, the Bell Slip, the Gateway Building at Canalside and the Buffalo Riverwalk Feasibility Study as initial priorities for use of this funding. NYPA has previously made $72.1 million available to ECHDC in support of its project work. Over the course of the 50-year operating license for the Niagara Power Project, NYPA is providing more than $1 billion worth of benefits to Western New York.

Governor Hochul also announced that the $87.5 million project to reuse and reactivate the former Delaware, Lackawanna and Western (DL&W) Trainshed is underway. The Trainshed will be a new commercial activity center on the Buffalo River waterfront with a new Metro Rail station enhancing public access to some of the region's most popular attractions in the Canalside and Cobblestone Districts, which have transformed from blighted landscapes into premier waterfront destinations over the past decade.

The first two phases will construct a Metro Rail Station in the DL&W Trainshed and extend Metro Rail service from the current terminus at Erie Canal Harbor Station into the Trainshed. Phase 1, which includes rail systems and site work, will be completed soon, with Phase 2 work on the building, structures, and mechanical/electrical/plumbing to be completed in 2024. A third phase of the project will make improvements to the core and shell of the DL&W Trainshed and other improvements necessary for private sector activity in the Trainshed. The Niagara Frontier Transportation Authority will also construct skywalk connections to the Key Bank Center and make improvements to the Riverwalk.

The New York State Department of Transportation's five-year Capital Plan, with funding from President Biden's Bipartisan Infrastructure Law, also includes several projects to improve roadways and enhance safety along new waterfront parkways at Tifft and Louisiana Streets. This includes a $25 million investment in traffic calming to reduce speeding, installation of bike lanes and a new, shared-use path at Tifft Street. An additional $25 million investment will fund a new bridge, streetscaping and improved safety on the parkway along Louisiana Street.

We're writing Buffalo's comeback story, and it starts with tapping into the unlimited potential of our city, including parks, infrastructure and amenities.

Representative Brian Higgins said, "Investments over the last 15 years have transformed Buffalo's waterfront from old, industrial, and inaccessible to one that is vibrant, welcoming, and destination for all. Under the leadership of Governor Hochul, we will now be able to accelerate the pace of waterfront progress in Western New York. New amenities, enhanced parks and parkways, interconnected trails, and the rebirth of the DL&W Terminal are no longer dreams in the distant future but funded certainties along Canalside and Buffalo's Outer Harbor over the next few years."

New York Power Authority Interim President and CEO Justin E. Driscoll said, "The Niagara Power Project — through its harnessing of the Niagara River waters to produce low-cost electricity for the benefit of the Power Authority's business and government customers in the region and throughout New York — has stood out as an engineering marvel since first operating in February 1961. We at NYPA are pleased to support these economic development and environmental improvement projects as they will have an immediate and enhancing effect on the Buffalo waterfront."

NYPA's advance payments will also accelerate projects at Canalside and the Outer Harbor, as well as to support ECHDC's ongoing operations and maintenance efforts. The State will expedite the following projects, and ECHDC will also identify additional projects for commencement or acceleration in the future, working in close collaboration with local stakeholders:

Empire State Development President, CEO and Commissioner Hope Knight said, "Buffalo is a city on the rise, and reclamation of the waterfront, being accelerated under Governor Hochul's leadership, showcases the Queen City's remarkable transformation. The extensive public improvements at Canalside and the Outer Harbor bring both recreation and tourism to the water's edge where it had long been void, while increasing waterfront accessibility and economic opportunity for the region." 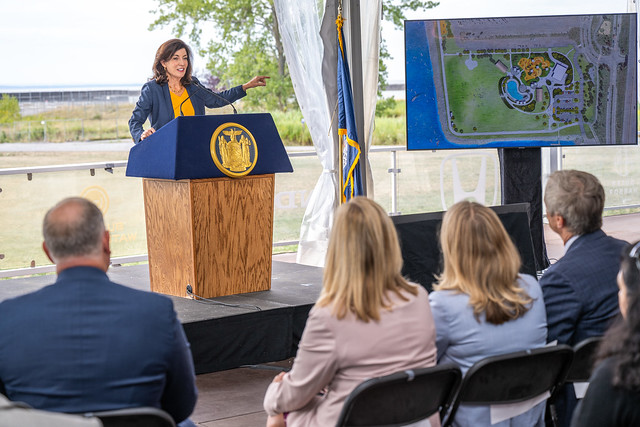 New York State Office of Parks, Recreation, and Historic Preservation Commissioner Erik Kulleseid said, "Buffalo Harbor has allowed thousands of Western New Yorkers to enjoy the marvelous Buffalo waterfront, and Governor Hochul's announced improvements will only enhance the opportunities for all visitors. I thank the Governor for her ongoing support of the Buffalo waterfront as well as all of our New York State Parks."

New York State Department of Transportation Commissioner Marie Therese Dominguez said, "Under Governor Hochul's leadership, New York State is making historic commitments to the City of Buffalo that will fuel economic growth and prosperity for decades to come. From investments in the waterfront to our transformative Kensington Expressway project, we are helping to create a better future through smart transportation projects that connect communities in the City of Buffalo and across Western New York."

State Senator Sean Ryan said, "Access to our beautiful waterfront is one of the things that makes Buffalo such a great city to live in and visit. These investments will make it safer and easier for families to get to and from the Outer Harbor, Canalside and all of the other great attractions along Lake Erie. I thank Governor Hochul for recognizing the importance of community connectivity to the waterfront and funding these transformational projects."

State Senator Tim Kennedy said, "Buffalo's waterfront continues to bring people back to the City, driving tourism, boosting local businesses, and providing one-of-a-kind recreational opportunities. This investment will only elevate that experience. New York is prioritizing a strategic vision for what this space can become by incentivizing growth and accessibility along these key parks and corridors."

Assemblymember Jonathan Rivera said, "I applaud Gov. Hochul for her continued investment in Buffalo's waterfront. The Governor's most recent outlay will not only improve pedestrian access to our city's most treasured asset, but it will also kickstart much needed development initiatives along these corridors, spur new and exciting commercial opportunities and improve safety to ensure the lasting maintenance of waterfront parkways."

Assemblymember Monica P. Wallace said, "This is a great day for Buffalo and Western New York. The projects announced today will reconnect our communities, grow our local economy by boosting tourism and help make both Outer Harbor and Canalside into world-class destinations. I thank Governor Hochul for continuing to deliver for Western New York, and I thank Rep. Higgins, Majority Leader Schumer, and the Biden Administration for passing infrastructure legislation to help make these vital investments possible."

Erie County Executive Mark C. Poloncarz said, "Today's announcement is great news for Erie County and all of Western New York and shows once again how Governor Hochul and our WNY delegation produce results for us. Significant infrastructure improvements are on the way paired with investments in NYS parks that will make these jewels more accessible and inviting than ever. I thank Governor Hochul for her unswerving focus on improving our region for today and the future."

Mayor Byron W. Brown said, “I thank Govenor Kathy Hochul, the Erie Canal Harbor Development Corporation, the Empire State Development Corporation, and the New York Power Authority for their unwavering support to deliver world-class venues and activities on our City’s Outer and Inner Harbors. These additional amenities will build on our tremendous progress in making the Buffalo waterfront a place that is a major draw for residents and visitors.”

NYPA is the largest state public power organization in the nation, operating 16 generating facilities and more than 1,400 circuit-miles of transmission lines. More than 80 percent of the electricity NYPA produces is clean renewable hydropower. NYPA uses no tax money or state credit. It finances its operations through the sale of bonds and revenues earned in large part through sales of electricity. For more information visit www.nypa.gov.

The Erie Canal Harbor Development Corporation (ECHDC) is governed by a nine-member board consisting of seven voting directors and two non-voting, ex-officio directors. The seven voting directors are recommended by the New York State Governor and are appointed by the New York State Urban Development Corporation d/b/a Empire State Development as sole shareholder of ECHDC. The two non-voting, ex-officio director positions are held by the Erie County Executive and the City of Buffalo Mayor.

As a subsidiary of Empire State Development, the State's chief economic development agency, the Erie Canal Harbor Development Corporation supports and promotes the creation of infrastructure and public activities at Canalside, the Ohio Street corridor and the Outer Harbor that is attracting critical mass, private investment and enhance the enjoyment of the waterfront for residents and tourists in Western New York. Its vision is to revitalize Western New York's waterfront and restore economic growth to Buffalo based on the region's legacy of pride, urban significance, and natural beauty.