Filming is set to begin in the Summer 2014 and will create at least three thousand jobs in New York State including up to 400 full time jobs. The project will include nearly 60 one-hour episodes focused on the 4 Defenders characters: Daredevil, Jessica Jones, Luke Cage and Iron Fist.

New York is where the entertainment industry started, and this unprecedented commitment from Disney and Marvel is further evidence that were bringing it back bigger and better than ever before, said Governor Cuomo. And when the entertainment industry thrives, it fuels dozens of other industries and businesses. The competition for these projects is fierce and Disney could have chosen to film these shows anywhere, but they knew that shooting in New York means getting to work with the best in world. These shows bring New Yorks superheroes home where they belong along with hundreds of jobs and millions of dollars in new business.

Since 2008 Disney has directly contributed almost half a billion dollars to New Yorks economy through television and film production, along with approximately 9,000 jobs for New Yorkers, said Robert A. Iger, Chairman and CEO, The Walt Disney Company. The Governors policies make this great state a more affordable and attractive location, opening the door for even greater economic investment and job creation for New Yorkers. Our Marvel series for Netflix will inject millions directly into the local economy and create hundreds of new jobs.

We thank the Governor and the great state of New York for helping us create the ultimate backdrop to this epic series. Setting our production in New York City truly underscores the authenticity and excitement we plan to bring to The Defenders and their flawed heroes of Hells Kitchen stories, said Alan Fine, President, Marvel Entertainment.

Last November, Disney and Netflix announced an unprecedented deal for Marvel TV to bring multiple original series of live-action adventures of four of Marvel's most popular characters exclusively to the world's leading Internet TV Network beginning in 2015. This pioneering agreement calls for Marvel to develop four serialized programs totaling 52 one-hour episodes culminating in a four to eight episode mini-series programming event. Led by a series focused on "Daredevil," followed by "Jessica Jones," "Iron Fist" and "Luke Cage," the epic will unfold over multiple years of original programming, taking viewers deep into the gritty world of heroes and villains of Hell's Kitchen, New York. Netflix has committed to a minimum of four, thirteen episodes series and a mini-series event in which the Marvel characters from the first four series team up as "The Defenders," much like The Avengers.

"The Defenders are classic New York characters; smart, resourceful and tough enough to always stand up for what's right," said Ted Sarandos, Netflix Chief Content Officer. "We're delighted they're coming to life on their home turf thanks to Governor Cuomo and his team."

When Governor Cuomo took office in 2011, he made the attraction of the film and television production and post-production industries, and jobs and the economic impact they bring with them, a key part of his overall strategy to grow New York States economy. Since that time, he has signed into law several important changes to both programs to make New York more competitive in this global marketplace, and the results have been significant. Both programs enjoyed record-breaking years in 2013, bringing billions of dollars in new spending and thousands of jobs into the Empire State. The stability provided by multiyear funding has particularly encouraged the development of television series production work, like the new Marvel series, as well as long term investments in infrastructure, all of which creates thousands of jobs directly and indirectly related to the actual productions themselves.

During calendar year 2013, applications for 183 film productions were submitted that included 124 films, 33 television programs and 26 pilots. These projects will:

John Ford, President, International Alliance of Theatrical and Stage Employees (IATSE) Local 52 said, The men and women of the IATSE look forward to participating in this ground breaking endeavor. Thanks to the vision of Governor Cuomo and the Legislature, the long term funding of the production incentives gives employers the comfort they need to invest in these new avenues of entertainment, which will provide thousands of new jobs with good wages and benefits.

Thomas J. O'Donnell, President Teamsters Local 817 said, Theatrical Teamsters Local 817 is thrilled that Marvel's newest television series will be filmed in New York. This long-term commitment is an incredible accomplishment that will bring not just jobs, but also stability to our members work and family lives. 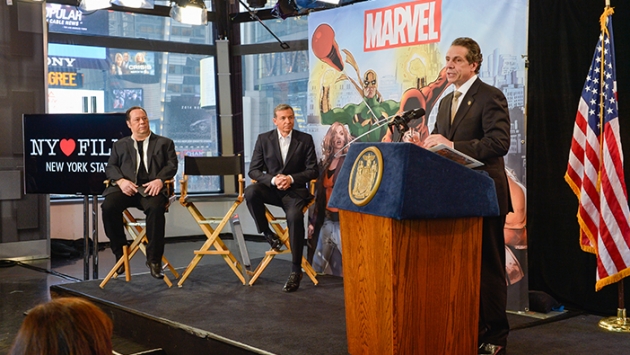 Live-Action TV Series Based on Marvel Characters to Film in New York5.jpg 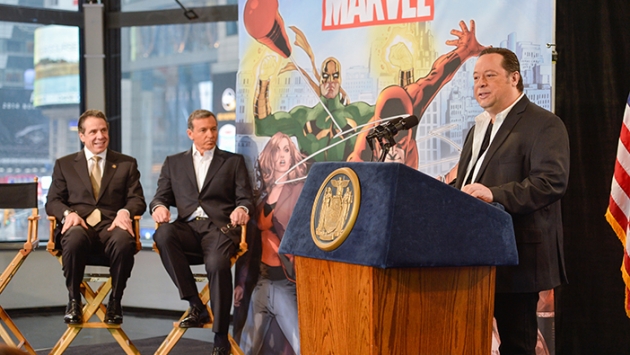 Live-Action TV Series Based on Marvel Characters to Film in New York4.jpg 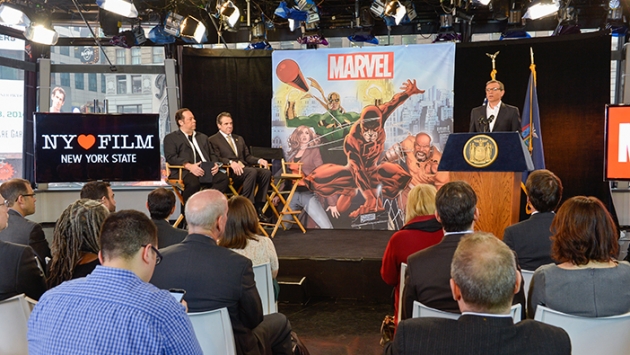 Live-Action TV Series Based on Marvel Characters to Film in New York3.jpg

Live-Action TV Series Based on Marvel Characters to Film in New York1.jpg