Governor Andrew M. Cuomo today unveiled sweeping plans for the complete transformation of the historic James A. Farley Post Office into a world-class transportation hub. At the Association for a Better New York, the Governor announced the selection of a developer-builder team including three companies, Related Companies, Vornado Realty LP, and Skanska AB to redevelop the Farley Building, creating a new 255,000 square foot Train Hall to house passenger facilities for the Long Island Rail Road and Amtrak.​

New LIRR Concourse
The Governor also announced that the MTA will at the same time initiate the comprehensive redesign of the LIRR’s existing 33rd Street concourse at Penn Station and an extensive renovation to the adjacent Seventh and Eighth Avenue subway stations. Construction on the LIRR concourse and the subway stations will conclude by or before completion of the work on the Farley Train Hall. The redesign will include nearly tripling the width of the existing corridor, which will significantly decrease congestion and result in notably higher ceilings – providing bright lighting, new way-finding, ticketing and informational systems.

“New York’s tomorrow depends on what we do today, and the new Moynihan Train Hall will be a world-class 21st century transportation hub,” said Governor Cuomo. “With more than twice the passengers of all JFK, LaGuardia, and Newark airports combined, the current Penn Station is overcrowded, decrepit, and claustrophobic. The Moynihan Train Hall will have more space than Grand Central’s main concourse, housing both Amtrak and LIRR ticketing and waiting areas, along with state-of-the-art security features, a modern, digital passenger experience, and a host of dining and retail options. This is not a plan – this is what’s going to happen. People are going to walk through this station and recognize that this is New York.”

In January, Empire State Development, the MTA, LIRR and Amtrak issued an RFP soliciting proposals for the comprehensive redevelopment of the historic Farley Building, including a Train Hall and the surrounding office and retail space. RFP responses were received in April and reviewed by a panel of private and public experts from the real estate, construction, design and finance fields.

Related, Vornado, and Skanska have all provided guarantees to complete the $1.595 billion project on time and, as part of the agreement, will pay the state a total of approximately $600 million in recognition to the value of the development opportunity within the Farley Building. The remainder of the project will be supported by $570 million from Empire State Development and $425 million from a combination of Amtrak, LIRR, Port Authority and federal government sources.

The Moynihan Train Hall will include shops and restaurants located under a new skylight on the building’s historic and architecturally dramatic steel trusses. The building will increase floor space 50 percent from Penn Station, and service riders on the LIRR, Amtrak and eventually accommodate passengers from Metro-North. A total of nine platforms and 17 tracks will be accessible from the Train Hall.

In addition to the Train Hall, RVS will redevelop the entire Farley Post Office Building to include approximately 700,000 square feet of office and retail space which will result in the creation of thousands of new construction and permanent jobs.

The project will use union labor and has committed to fully meet the Governor’s nation-leading goal of 30 percent of the work completed by Minority and Women-Owned Business Enterprises.

This is not a plan – this is what’s going to happen. People are going to walk through this station and recognize that this is New York.

A dramatic redesign of the LIRR portions of Penn Station will significantly improve passenger experience and circulation. The plan will include nearly tripling the width of the 33rd Street Corridor, which is among the busiest sections of Penn Station and stretches along the station’s lower level from Seventh to Eighth Avenue. Other improvements will include upgraded lighting and wayfinding, and digital screens to convey information and create a modern passenger experience. It is anticipated that the majority of the corridor improvements will be completed simultaneous to the Train Hall’s opening, with other elements completed sooner. Construction of the new LIRR corridor will cost an estimated $170 million.

The MTA will issue an RFP for the preliminary design of Penn Station improvements to pre-qualified consulting firms today. A contract is expected to be awarded by the end of 2016.

The transformational redesign also includes upgrading the two subway stations at Penn Station. Many of these improvements to subway stations on Seventh and Eighth Avenues are expected as early as 2018 and will cost approximately $50 million.

The first phase of construction, to create a concourse west of Eighth Avenue, is nearing completion. The concourse will provide direct access to LIRR and Amtrak tracks and will connect the future Moynihan Train Hall to Penn Station underground via 33rd Street. New plazas and street level entrances into the Farley Building on either side of the monumental staircase will provide access to this new, lower concourse as well as speed boarding and exiting for passengers.

In January, Empire State Development, Amtrak, and the MTA issued a Request for Expressions of Interest for redeveloping Penn Station. As Amtrak relocates to the Moynihan Train Hall, the RFEI responses provided ideas for the future proposed redevelopment of the current Amtrak concourse that will be incorporated into concepts previously suggested by the railway operators. ESD will partner with Amtrak on the creation of an RFP for the concourse.

Ultimately, all of these coordinated efforts will result in a bolder, fully modernized Penn-Farley Complex, with increased passenger capacity, inviting entrances and access points, and a state-of-the-art Train Hall at the Farley Building across Eighth Avenue. All work will be compatible with future plans to add platform and track capacity to Penn Station in conjunction with the completion of the Gateway Program. 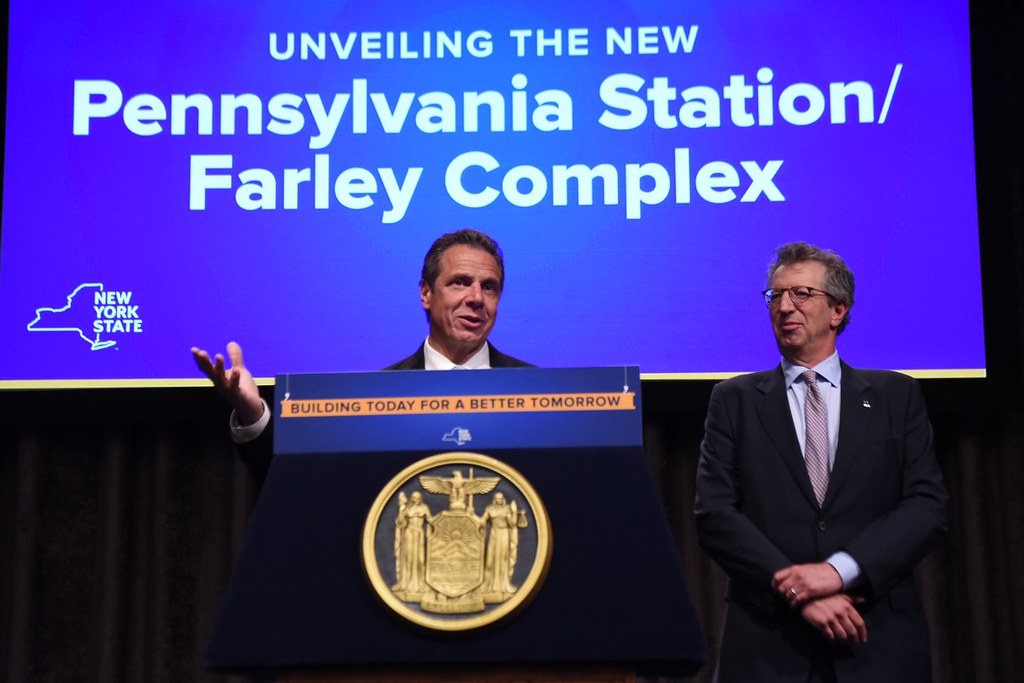 “The new Farley Train Hall will streamline travel into and through the region for the 230,000 LIRR daily passengers and millions of subway riders through the vastly improved Seventh and Eighth Avenues stations,” said MTA Chairman & CEO Tom Prendergast. “Governor Cuomo has turned what for decades was merely rhetoric about investing in infrastructure into reality, and the improved MTA travel experience and resulting regional economy boost will be felt long into the future.”

Amtrak Board Chairman Anthony R. Coscia said, “We applaud Governor Cuomo's leadership in transforming the Farley Post Office building into a state-of-the-art rail station. In addition to the new Moynihan Train Hall, which will serve as Amtrak’s future station in Manhattan, this project will allow for enhancements at Penn Station that will significantly improve the customer experience for its many users. Taken together with the infrastructure improvements being advanced under the Gateway Program, Amtrak is committed to working with New York State and other key stakeholders to advance the investments befitting America’s busiest train station.”

Congressman José E. Serrano said, “This important effort will expand New Yorkers’ access to state of the art, safe, and reliable transportation. Renovating the Moynihan Train Hall, the LIRR Concourse, and the Amtrak Portion of Penn Station will modernize a key part of New York’s public transportation. The Moynihan Train Hall project had been on hold for many years and I am glad to see Governor Cuomo taking the necessary steps to move it forward,” said Congressman Serrano.

Congresswoman Carolyn B. Maloney said, “I am thrilled that Governor Cuomo has come forward with a bold new plan to renovate and transform Penn Station and move ahead with Moynihan Train Hall in the Farley Building,” said Congresswoman Carolyn B. Maloney. “Anyone who has spent time in the existing structure of Penn Station can see how woefully inadequate it is for the needs of the hundreds of thousands of commuters who pass through it every day, and the addition of the Farley Complex will make for a much more pleasant experience for passengers on Amtrak and LIRR, and a more pleasant transfer to local subways. After 20 years of waiting, we will now have a train station we can be proud of.”

Senate Majority Leader John J. Flanagan said, “Penn Station is the busiest transportation hub in the country, and this new complex will allow New York City to meet the demand with state-of-the-art facilities and a more modern infrastructure. When this project is finished, the Penn Station-Farley Complex renovation will significantly ease the commute for thousands of New Yorkers, and create hundreds of new jobs.”

State Senate Co-Coalition Leader Jeff Klein said, "Penn Station needs a makeover and Governor Cuomo's plan will upgrade our infrastructure to finally bring our railways into modernity, enhancing passenger experience with shops, restaurants and upgraded technology. Today marks the first step in two decades with construction commencing this fall at the Moynihan Train Hall and with other exciting upgrades to come.”

State Senator and Senate Democratic Leader Andrea Stewart-Cousins said, “Greater utilization of mass transportation options will help save commuter time and money and reduce vehicle congestion and pollution. Additionally, the renovations and new construction will lead to more jobs and increased tourism. I commend Governor Cuomo for this wise infrastructure investment to help transform the James Farley Post Office into a mass-transit hub and for his efforts to help renovate Moynihan Train Hall.”

Senator Adriano Espaillat said, “A gateway to many of New York’s transportation arteries, Penn Station is integral to the daily lives of hundreds of thousands of New Yorkers, and this project will dramatically improve their travel experiences. New York City is the greatest city in the world and we deserve a new Penn Station to showcase everything New York City has to offer. I applaud Governor Cuomo for this visionary announcement, and look forward to a new, transformed Penn-Farley complex.”​​

Senator Brad Hoylman, "Penn Station is a New York landmark, but for years it has not lived up to the standards we value as New Yorkers. Across our state, Governor Cuomo’s visionary plan for 21st century infrastructure - from our upstate airports to the new Penn-Farley Complex - is taking shape and fortifying our transportation network. We are building for tomorrow, and Penn-Farley is a cornerstone in this tremendous plan. Now, New Yorkers can look forward to walking through the station's corridors, enjoying modern amenities and getting to and from their destinations with greater ease." ​

Assemblymember Richard Gottfried said, “Thanks to Governor Cuomo’s leadership and vision to transform New York’s infrastructure, we can look forward to a new travel experience for residents and travelers. This state-of-the-art transit center will make travel easier, more efficient and less crowded for everyone. I applaud the Governor for pushing this project forward and we look forward to the creation of construction jobs throughout development and permanent jobs at the new hub once completed.”

New York City Councilman Corey Johnson said, “With the redesign of the Penn-Farley complex, Governor Cuomo has taken a major step forward in making his vision for a better New York a reality. With new shopping opportunities, increased passenger capacity and state of the art facilities, the new Penn-Farley complex will not only enhance the experience of the every-day traveler, but invite visitors to a New York that is bigger, better and on the move.”