In the face of the federal government's assault on New York, Governor Andrew M. Cuomo today unveiled his "2019 Justice Agenda," urging the legislature to act in the first 100 days of the next legislative session. The Governor's agenda represents a suite of ambitious proposals to ensure the promise of full, true justice for all, including economic justice, social justice, racial justice.

Governor Cuomo announced the agenda in a speech hosted by the Roosevelt Institute. This year, in the face of the nation's biggest social crisis, and with the federal government seeking to undo generations of progress, Governor Cuomo broke with tradition, laying out his legislative agenda in December 2018 instead of waiting until the State of the State address to enable the Legislature to commence action on these top priorities immediately upon convening.

"Let this agenda be New York's Declaration of Independence. We declare independence from this federal government's policies. We disconnect from the nationalism, and the racism, and the chaos, and the xenophobia, and the misogyny, and the discrimination, and the dissembling of this Washington administration," Governor Cuomo said. "We proclaim our Federal Government's policy not only regressive, not only repugnant to New York values, we declare it un-American. Let us pass this ambitious progressive agenda as New York's restoration of true democracy, restoring fairness, progress and pride."

Ensure a Progressive Tax System: While the federal government prioritizes tax cuts for corporations and the wealthy, Governor Cuomo believes in a just, progressive tax system that taxes its citizens based on their ability to pay. The Governor will maintain the state's progressive income tax with a millionaire's tax, while permanently capping regressive local property taxes at 2%.

Cut Middle Class Taxes while Fighting to repeal SALT: The federal government's cap on state and local tax (SALT) deductions was a devastating and targeted assault on New York that has increased taxes on New Yorkers and reduced home values. Governor Cuomo will continue to lead the fight to repeal the cap on SALT while in New York continuing tax cuts for middle class families.

Protect Quality, Affordable Health Care: While the federal government and radical judges continue to roll back the Affordable Care Act and tear away health care from millions of Americans, Governor Cuomo will take action to make sure New Yorkers are protected. The Governor will work to codify the health exchange into law and pass a law to ensure pre-existing conditions continue to be covered by insurance companies regardless of what happens at the federal level.

Codify Reproductive Rights: In the face of the federal assault on women's reproductive rights, including a Supreme Court that threatens to roll back Roe v. Wade, Governor Cuomo will fight to pass the Reproductive Health Act and the Comprehensive Contraceptive Coverage Act within the first 30 days of the new session.

Enshrine Gender Equality into Law: Nearly a century after it was first proposed, New York State has still not passed the Equal Rights Amendment to protect against discrimination on the basis of sex in our State constitution. To right this decades-old wrong, Governor Cuomo will push to pass the Equal Rights Amendment to add sex as a protected class.

Combat Gun Violence: 2018 was by far the worst year for school shootings in American history. To once again lead the nation on gun safety, Governor Cuomo will push to pass the Red Flag Law, ban bump stocks and extend the waiting period for purchasing a gun from three days to 10 days.

Fund and Restructure the MTA While Easing Traffic in New York City's Business District: After decades of neglect and diffused responsibility, the MTA is in dire need of funding and reorganization. Governor Cuomo will fix the MTA by passing congestion pricing and overhauling the outdated structure of the authority in order to build a reliable, state of the art mass transit system with a steady funding stream and a structure that supports operational excellence.

Ensure Education Equity: After requiring data on how local schools distribute funds in last year's budget, it's clear that poorer schools too often do not receive an equitable share of funding from their school districts. Governor Cuomo will fight for an education system where districts distribute funding based on need and fairness to ensure that every child receives a quality education.

Pass the Dream Act: While the federal government has declared war on new immigrants, New York is standing up for our immigrant communities. This year, New York will pass the Dream Act once and for all to ensure a higher education system that opens the door of opportunity to all of our children.

Launch the Green New Deal: The federal government still denies climate change, remarkably turning a blind eye to their own government's scientific report. New York will be the most progressive state in the nation in moving to renewables and growing the new sustainable green economy. The Green New Deal will make New York's electricity 100% carbon neutral by 2040 and put the state on the path to eliminating its carbon footprint.

Ensure Clean, Safe Drinking Water for All: Industrial toxins have infiltrated many of our communities' drinking water systems, but the federal Environmental Protection Agency has been slow to test and regulate chemicals and to regulate pollution. Governor Cuomo will invest in our water infrastructure and clean our water for our children and our children's children.

Improve Our Democracy: To continue New York's progressive path of justice for all, Governor Cuomo will protect our democracy to make sure our government truly represents the people. While the federal government works to disenfranchise voters, Governor Cuomo will encourage citizens to engage in the democratic process by allowing voting by mail, enacting early voting, instituting same day and automatic voter registration, synchronizing federal and state elections and make Election Day a State Holiday to ensure as many people as possible participate in the democratic process. 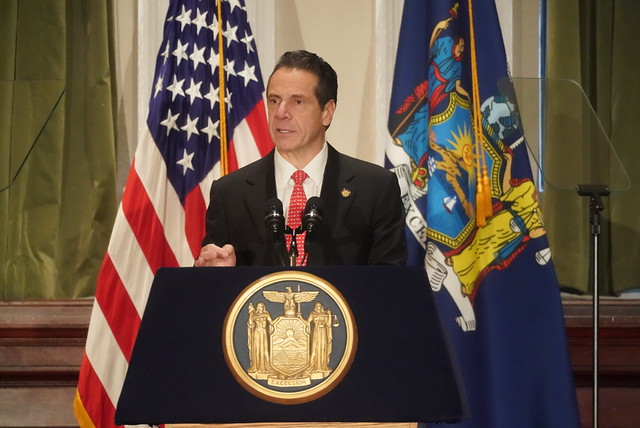 Increase Trust in the Democratic System: To ensure our government is for the people, by the people, Governor Cuomo will close the LLC loophole, ban corporate campaign contributions, overhaul our campaign finance system and end outside income for lawmakers.

Protect Public Sector Unions: While the federal government is waging an all-out attack on the labor movement in both the public and private sector and seeks to undermine the right to organize and collective bargaining, Governor Cuomo believes that the labor movement is a force for social justice and the middle class. The Governor will expand the Janus protections to cover public sector labor unions at the local level and ensure workers have labor rights in the gig economy.

Keep Housing Affordable for New Yorkers: The lack of affordable housing is a crisis across the state and nation. While the federal government has abandoned its constitutional and moral responsibility dictated by the 1949 Housing Act, under Governor Cuomo's leadership New York will invest more in affordable housing than ever before. Governor Cuomo will reform rent regulations, including ending vacancy decontrol, repealing preferential rent and limiting capital improvement charges to protect affordable housing and respect tenants' rights.

Legalize Adult Use of Recreational Marijuana: Governor Cuomo will end the disproportionate criminalization of one race over another by regulating, legalizing and taxing adult use of recreational marijuana.

Ensure Fairness in the Criminal Justice System: Governor Cuomo will work to address injustice in the criminal justice system by ending cash bail and enacting speedy trial and discovery reforms.