Many roads, including part of Thruway, remain closed: driving prohibited

For information on road conditions, call 511

Governor Andrew M. Cuomo today visited Western New York to tour the current storm conditions, where there is between three and four feet of lake effect snow already on the ground and an additional amount of up to two feet expected in the coming days. The State has been working around the clock to rescue motorists stuck on the Thruway and other state roads, as well as provide help to other New Yorkers affected by the storm. All occupants of passenger vehicles have been evacuated, and there are 98 commercial vehicles that are currently being addressed. State teams are individually checking on the occupants of these commercial vehicles to offer assistance, and urge anyone needing immediate help to call 911. 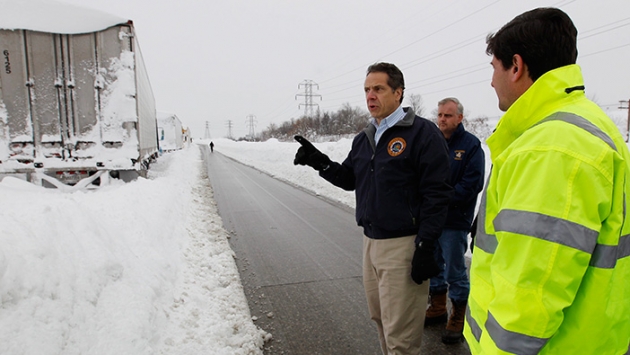 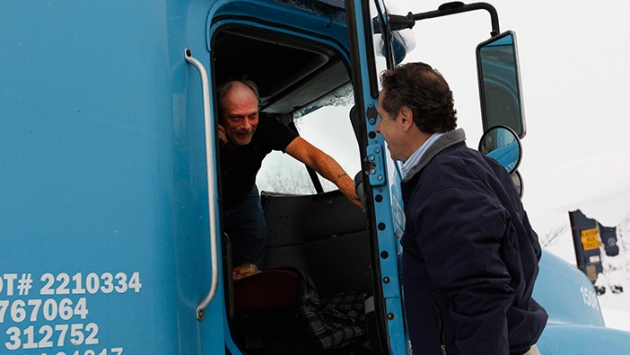 Governor Cuomo checks in on drivers who chose to stay with their trucks on NYS Thruway. 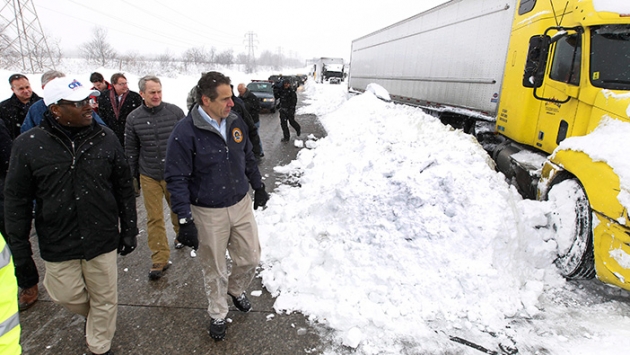 Many roads, including part of Thruway, remain closed. 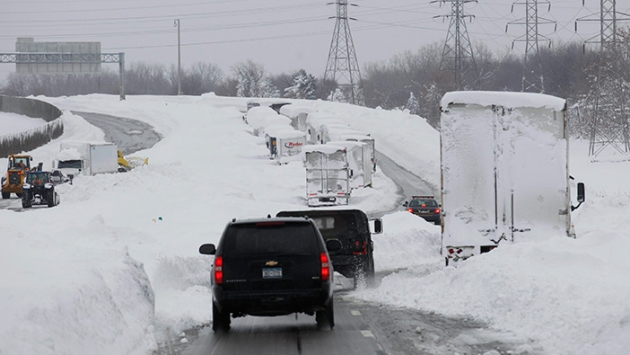 The State has been working around the clock to rescue motorists stuck on the Thruway and other state roads.

The Governor last night declared a State of Emergency for affected counties so that residents can receive as much assistance as possible. With a significant amount of snow expected again this evening, the Governor has instructed the National Guard, the New York State Police, and all state agencies to prepare to help affected residents and roadways.

"This storm is an extraordinarily difficult situation, with snowfall that may break records. We are prepared, but we need residents to stay off the roads so that first responders can do their work and keep people safe," Governor Cuomo said. "Although the sun may be shining, we are using this opening to clear roads before the snow begins falling again. This is an opportunity to be a good neighbor and check on your fellow New Yorkers to see if they need assistance, but I urge everyone to stay off the road."

State Plows and Snow Removal Equipment Deployed to Region
The New York State Department of Transportation moved 199 plows and 446 operators and supervisors from around the state to Western New York to assist with snow removal operations. Additionally, they have secured three large snow blowers from the State of Connecticut, which are expected to arrive in Western New York tomorrow. Plows are currently working to clear paths for tow trucks to assist motorists stuck in the snow. The Department of Transportation will have a total of 347 snowplows, 880 operators and supervisors, 36 loaders and 17 large snow blowers working on this storm. The Department is fully stocked with road salt and has also activated private contractors to assist in clearing snow from roadways. Currently, contractors have provided 30 loaders and 60 operators, and that is expected to increase to over 100 pieces of equipment by the end of today.

The equipment from the Department of Transportation, Thruway Authority, and private contractors that will be working on this storm by the end of the day totals 463 plows, 81 front end loaders, 25 large snow blowers, and 1177 operators and supervisors.

Deployment of National Guard
The New York National Guard will have approximately 200 Soldiers and Airmen committed to helping today’s recovery and preparation efforts. Soldiers of the 152nd and 827th Engineer Companies will deploy nine front end loaders, six Bobcats, and 16 dump trucks to assist in snow removal operations as directed. Additionally, the National Guard will deploy 35 humvees, each carrying two Soldiers, from Central New York to the storm region to assist with traffic control.

A National Guard Initial Response Force of 20 Airmen and five humvees from the 107th Airlift Wing at Niagara Falls Air Reserve Station will deploy to assist in traffic control duties. A second Initial Response Force from the 642nd Aviation Support Battalion in Rochester will deploy 20 Soldiers and five humvees to assist in snow removal at Eden Heights of West Seneca Assisted Living in West Seneca.

Two additional National Guard response forces comprised of 10 humvees and 40 personnel from the 174th Attack Wing and the 27th Infantry Brigade Combat Team in Syracuse are also being sent to Western New York to assist in the response.

Travel Bans
Travel bans are in effect in Lancaster, West Seneca, South Buffalo, Cheektowaga and Hamburg. During a travel ban, driving for any reason is prohibited. Travel advisories, which restrict drivers from any unnecessary trips, are ongoing in all of Erie and Genesee Counties.

Road Closures
Due to the current condition of roads, road closures will be in effect until further notice. Driving on these roads is strictly prohibited and is unsafe for workers clearing the roadway:

Public Transportation Delays and Cancellations
The Niagara Frontier Transportation Authority (NFTA) Southtowns bus service is still suspended due to continuing snow and impassable roads. Buses are still operating in the City of Buffalo and in the north towns. The following Metro routes are not running at this time: 14,15,16, 27, 36,42, 46 , 68, 69,70,72,74,75, and 76. All other routes are operating, but may be running late.

Additionally, all Amtrak service west of Albany is suspended.

As of 12:30pm Wednesday, there were about 715 New Yorkers without power, down from over 9,000. To help with this, the New York State Public Service Commission will extend its call center helpline hours, which will continue Wednesday, November 19th until 7:30 PM, as needed, to assist consumers in storm preparation and response efforts. The helpline number is 1-800-342-3377.

Public Service Commission staff will continue to monitor the utilities efforts throughout the storm and during the restoration period. The electric utilities are prepared to respond to power disruptions throughout the event.

The New York State Electric and Gas Corporation and National Grid are providing six vehicles to assist in efforts.

State Emergency Operations Center Open
Governor Cuomo activated the New York State Emergency Operations Center in Albany on Monday, November 17 at 8:00 PM, which will stay open through Friday evening. Personnel from the Division of Homeland Security and Emergency Services (with staff from the Office of Emergency Management as well as the Office of Fire Prevention and Control), Department of Transportation, Department of Environmental Conservation, New York State Thruway, State Police, Public Service Commission and the Division of Military and Naval Affairs are on hand to provide assistance.

Use Caution If Travel Is Necessary
It is important for motorists on all roads to note that snowplows travel at speeds up to 35 miles per hour, which in many cases is lower than the posted speed limit, to ensure that salt being dispersed stays in the driving lanes and does not scatter off the roadways. Oftentimes on interstate highways, snowplows will operate side by side, as this is the most efficient and safe way to clear several lanes at one time.

Motorists and pedestrians should also keep in mind that snowplow drivers have limited lines of sight, and the size and weight of snowplows can make it very difficult to maneuver and stop quickly. Snow blowing from behind the plow can severely reduce visibility or cause whiteout conditions. Motorists should not attempt to pass snowplows or follow too closely. The safest place for motorists to drive is well behind the snowplows where the roadway is clear and salted.

Some of the most important tips for safe winter driving include:

Motorists should also include the following emergency items in their vehicles:

Heavy exertion, such as shoveling snow, clearing debris, or pushing a car, can increase the risk of a heart attack. To avoid problems:

If You Lose Power:

The New York State Department of Transportation provides a travel advisory system that features real-time travel reports and can be accessed by dialing 511, online at www.511ny.org, or via a downloadable smart phone app. The web site features a color-coded map indicating which state roads are snow covered, ice covered, wet, dry, or closed to help travelers determine if travel is advisable. The system provides real-time snow and ice conditions for interstates and other heavily traveled roads, as reported by snowplow operators.