New York State to Provide Access to Land, Spend $1 Million for Paving and Prep Work and $6 Million to Fund Transformation of Seven Acres beneath the Kosciuszko Bridge in Brooklyn into a World-Class Public Open Space

Rendering of the Public Program Space and Park Available Here

Governor Andrew M. Cuomo today toured the second span of the new Kosciuszko Bridge and announced an agreement that will lead to the completion of the first and second phases of "Under the K" - a transformative project that will turn nearly seven acres beneath the Kosciuszko Bridge in Brooklyn into a world-class public program space and park. Under the agreement, the New York State Department of Transportation will provide the use of state land to North Brooklyn Parks Alliance - which is leading the design and construction, and will ultimately operate and maintain the space - to allow for the beginning of programming by the summer of 2020. Governor Cuomo also announced that New York State will spend $1 million for paving and prep work, as well as an additional $6 million to fully fund the capital investments planned for phase two of the project.

"Nobody believed this bridge could be completed in under nine years and we were able to do it in five, and because the local community has everything to do with the construction process, we decided to think outside the box with this new park and open space," Governor Cuomo said. "The land parcel under the new Kosciuszko Bridge is going to be turned into a park featuring art, concerts, recreation and other public uses which will benefit the neighborhood for decades to come."

The second span of the new Kosciuszko Bridge will open to traffic before rush hour early Thursday morning, August 29. The bridge will also be open to the public on Wednesday from noon to 6 p.m. for the community to bike or walk over the new bridge before it opens to traffic early Thursday.

Assembly Member Joseph R. Lentol said, "This new project to transform space under the Kosciuszko Bridge into a public open space is exactly what this community needs. Not only will this versatile space encourage New Yorkers to spend more time outdoors, it will serve our community through artistic programs, youth programs and entertainment for all ages. I commend Governor Cuomo for recognizing this need for our community and for getting it done, and through these efforts we are learning that as we rebuild our infrastructure we can add beauty and open space in new and refreshing ways."

Katie Denny Horowitz, Executive Director, North Brooklyn Parks Alliance, said, "Under the K is a visionary project that transforms how cities can and should approach the development of new urban parkland. Its innovative approach to open space mirrors the innovation of the new Kosciuszko Bridge itself, and NBPA applauds Governor Cuomo for his investment in our community's infrastructure, parks, and public programming."

Nobody believed this bridge could be completed in under nine years and we were able to do it in five.

Called "Under the K," the new public space is designed by PUBLIC WORK, the Toronto-based landscape architecture firm responsible for The Bentway, the popular public space underneath the Gardiner Expressway in Toronto. The Bentway quickly gained visibility as a major cultural attrac­tion for the city. Located at the hub of four of diverse and growing neighborhoods, Under the K will fill a void within the area's current open space options. Envisioned as a collaborative space unlike other traditional parks, Under the K will celebrate the resilience of nature and Brooklyn's diverse community culture.

With the agreement with NYSDOT complete for use of the land, phase one of the project will move forward, which includes creating the park's perimeter, the preparation of future planting areas, and the laying of asphalt and creation of pedestrian paths based on the design of PUBLIC WORK. This will allow for the space's planned programming to begin as early as Memorial Day 2020. With full funding also now in place for phase two, the process can move forward for additional park elements to further enhance the space. Phase two of the project will introduce elements which include: elevating specified areas of the park with landscaped mounds, installing seating areas, planting trees and designing and planting landscaped gardens with a focus on native plantings.

The "Under the K" park will be used as a cultural and recreational destination, and will provide an opportunity for environmental education. The planned massive industrial rooms will offer venues for creative expression, including large-scale public art projects that incorporate light, sound and sculptural works and on-site arts education programming that engages the local community. In addition, the North Brooklyn Parks Alliance plans to develop a season of site-specific music, cinema and performances that engage the unique elements of the space. For recreational opportunities, the Alliance plans to install temporary facilities that allow for a season of adventurous sporting activities not possible in most open spaces across the city, ranging from wall climbing to bike pump tracks to acrobatics. The park's proximity to the creek will also inform a robust environmental program, ranging from educational workshops to boating explorations to family-friendly planting events.

The plan for "Under the K" is the latest in the state's efforts to ensure the historic Kosciuszko Bridge project results in improved public amenities for the communities surrounding the bridge. In December 2018, Sergeant William Dougherty Park opened on the Brooklyn side of the bridge in Greenpoint. The public park was expanded and completely renovated as part of the Kosciuszko Bridge construction project and includes a playground, skate park, basketball court, handball courts, a water play area with spray showers and a comfort station. Seating is available throughout the modern, landscaped facility. A new park will be completed on the Queens side in 2022. Streetscaping enhancements such as decorative lighting, tree plantings and new sidewalks are also being placed on local streets within the project limits of the Kosciuszko Bridge. 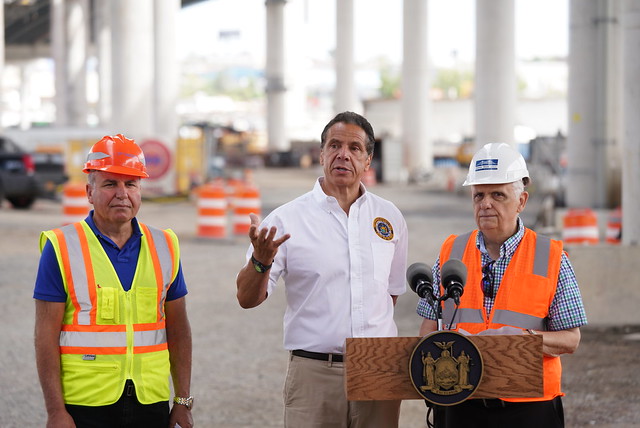 The Kosciuszko Bridge project replaces the previous 80-year-old bridge, first opened in 1939 under President Roosevelt's administration, with two new state-of-the-art, cable-stayed bridges, one Queens-bound and one Brooklyn-bound. The Kosciuszko Bridge is the first new major bridge crossing constructed in New York City since the Verrazzano Bridge in 1964. Starting early Thursday morning, the Queens-bound bridge will carry five lanes of traffic and a separate Brooklyn-bound bridge will carry four lanes, as well as a 20-feet-wide bikeway/walkway with spectacular views of Manhattan. Shoulders have been added to both bridges, where none currently exist. The roadway incline has also been lowered by approximately 35 feet, making it easier for trucks and other large vehicles to maintain consistent speeds on the bridge - helping reduce traffic congestion. In April 2017, traffic was shifted onto the new Queens-bound bridge and the existing bridge was removed to complete Phase 1 of the project.