"Our veterans risked their lives in order to defend the ideals and principles that this nation was founded upon and it is our duty to do everything we can to support them when they return home,” Governor Cuomo said. “From improving access to healthcare treatments and services, to removing barriers to employment, all five of these bills take important steps to ensure that veterans have every opportunity to continue succeeding when they return home.”

The first bill (S.5629 (Savino)/ A.7006 (Gottfried)), adds Post Traumatic Stress Disorder, or PTSD, as the twelfth condition that makes New Yorkers eligible to access the state’s medical marijuana program. PTSD is a serious condition that involves a person developing symptoms after experiencing a traumatic stressor, including anger, flashbacks, nightmares, night sweats, numbing, insomnia, and avoidance. It is estimated that approximately 19,000 patients with PTSD in New York could benefit from the use of medical marijuana. This includes military veterans, police officers and fire fighters, as well as survivors of domestic violence, rape, violent crime, and accidents. Virtually every state in the country with a medical marijuana program allows for treatment of PTSD.

The second bill (S.2911 (Croci)/A.3198 (Paulin)), provides combat veterans employed by the state with additional days of leave to obtain health services, counseling and access to other benefits. The experiences of combat take their toll on combat veterans, both physically and emotionally, and additional leave for health-related services is needed to help address the traumas they faced, both abroad and at home.

The third bill (S.946 (Croci)/A.1105 (Hunter)), supports veterans seeking employment by waiving the application fee required to take a civil service examination. One of the most difficult aspects of returning to civilian life for veterans can be finding quality employment. Waiving this fee shows our gratitude to these brave men and women as they seek opportunities in the public sector.

“From improving access to healthcare treatments and services, to removing barriers to employment, all five of these bills take important steps to ensure that veterans have every opportunity to continue succeeding when they return home.”

The fourth bill (S.1853 (Croci)/A.6038 (Dinowitz)), requires the New York Department of State and Division of Military and Naval Affairs to maintain a public list of all not-for-profit corporations that solicit funds on behalf of the armed forces. Current law requires the Adjutant General of the New York National Guard to sign off on any not-for-profit that solicits funds or other benefits for the armed forces of the United States, a foreign country, or the auxiliaries of any state. Making this information publicly available will help New Yorkers, who wish to make donations to not-for-profits incorporated for the purpose of supporting our armed forces, ensure that they are donating to approved organizations.

The final bill (S5540 (Lazna)/A7506 (DenDekker)) directs the New York State Office of General Services to place POW/MIA chair and plaque in the State Capitol to memorialize the thousands of service members who remain unaccounted for since World War I. This dedication serves as just one way to remember the brave Soldiers, Sailors, Airmen and Marines who have been held captive or never returned home from war. The memorial chair and plaque will be placed in the Capitol’s first floor lobby near the State Street entrance.

Senator Diane J. Savino said, "New York is home to some of the bravest service members in the nation and in addition to residents suffering from PTSD due to other traumatic experiences, this legislation will ensure that everyone receives the effective treatment they deserve. I commend Governor Cuomo for taking action to support our residents and veterans, and signing legislation that will help remedy a number of serious conditions affecting New Yorkers in communities across the state.”

Senator Andrew Lanza said, “The brave men and women who put their lives on the line in service to their country face immeasurable dangers each and every day, and because of that danger, some of them don’t return home. This empty chair and plaque will serve as a dedicated space in the State Capitol to memorialize POW/MIA soldiers who gave everything to protect Americans. I thank Governor Cuomo for signing this bill into law, ensuring that this small token of gratitude is available for New Yorkers to come to the Capitol lobby and pay their respects to our prisoners of war and solders missing in action.”

Assembly Health Committee Chair Richard N. Gottfried said, "It is our duty to help veterans transition home, including those suffering from PTSD.   With many New Yorkers struggling with the effects of this condition, I commend the Governor for signing this bill to provide access to treatment that works. Men and women who have lived through traumatic events will now have the means to live a quality life, and I thank Governor Cuomo for making this a reality.” 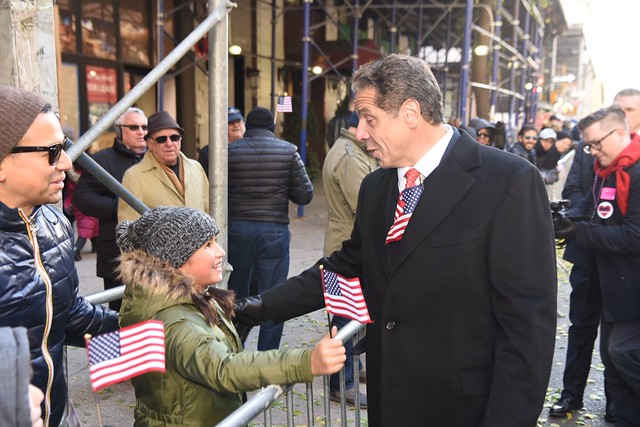 Assemblyman Michael DenDekker, Chair of the Assembly Committee on Veterans Affairs said, “I commend Governor Cuomo for recognizing and honoring the brave prisoners of war and the New York men and women who are still missing in action today. Thousands of service members have gone unaccounted for and with the addition of the POW/MIA Chair of Honor in the New York State Capitol, we will forever remember the efforts and sacrifices our brothers and sisters have made, to ensure the freedom and safety for all.”

Assembly Member Amy Paulin said, “The brave men and women who served our country deserve our full support, and by signing this legislation, Governor Cuomo is once again showing that New York stands with our veterans. This law will provide additional sick leave to help veterans obtain health benefits and get counseling, and I applaud the Governor for signing this critical legislation on Veterans Day.”

Assembly Member Pamela Hunter said, “This legislation will waive the exam fee for honorably discharged veterans who seek to further serve their country through civil service. I was proud to sponsor this legislation and I commend Governor Cuomo for signing it and for all of our work to ensure New York supports veterans.”

Assembly Member Jeffrey Dinowitz said, “I am proud to have sponsored this bill that makes any not-for-profit organization that is authorized to solicit funds for the United States armed forces available to the public. I thank Governor Cuomo for signing this bill into law, helping to ensure that New Yorkers seeking to donate to the armed forces are donating to legitimate groups, protecting them from scammers seeking to cheat the system.”