Includes Over $1.5 Billion in Grants for Local Governments to Improve Water Infrastructure

This includes over $1.5 billion in grants for water infrastructure improvements and creates a $75 million rebate program to give homeowners and small businesses an incentive to replace and upgrade aging septic systems. In addition to traditional infrastructure, funds are also available for 'green' infrastructure, with $110 million dedicated ​for source water protection initiatives, including land acquisition.

"Clean water is an issue of paramount national importance, and New York is once again leading the nation with this bold investment to strengthen the infrastructure of our water systems and protect the long-term health, sustainability and economic vitality of communities across the state," Governor Cuomo said. "This funding will provide New York’s cities, towns and villages with modernized, sustainable water systems – protecting our precious resources and securing a healthier future for all New Yorkers."

The Governor also announced that municipalities can now apply for $255 million in grants for drinking water and clean water infrastructure projects through the established NYS Water Grant Program and new Intermunicipal Grant Program, funded though the Clean Water Infrastructure Act.​ Applications and additional information are now available here and must be submitted along with any required supporting documentation to: [email protected] by 5:00 p.m. on June 23, 2017.

Beyond this $2.5 billion investment, the FY 2018 Budget contains additional investments to protect and improve water quality improvements on Long Island, including:

The FY 2018 Budget establishes the Drinking Water Quality Council to identifies strategies to address emerging threats to water quality. Eight of the twelve Council members are to be appointed by the Governor, including the DOH and DEC Commissioners, as well as an additional representative from DOH and DEC. The remaining four members appointed by the Governor will include a water purveyor representative, a toxicologist/risk assessor, a microbiologist and an environmental engineer.​ Two each are recommended by the Senate and Assembly representing water purveyors and a member with a background in toxicology or risk assessment.

The federal government currently only requires testing for unregulated contaminants for water systems serving 10,000 residents or more. The FY 2018 Budget includes legislation requiring that all public water systems in New York State, including smaller systems not covered under the current federal rule, test for emerging contaminants, like 1,4-dioxane, PFOA and PFOS. The Department of Health will provide financial assistance for the testing to small public water systems that demonstrate financial hardship.

This funding will provide NY’s cities, towns and villages with modernized, sustainable water systems – protecting our precious resources and securing a healthier future for all NY'ers.

In addition to the FY 2018 Budget initiatives and funding described above, the Governor detailed aggressive actions the State is undertaking to clean-up contaminated sites on Long Island, including:

Last year, DEC declared the Gabreski Air National Guard Base in Suffolk County a Superfund Site due to historic use of PFOS-containing firefighting foam. With this designation, DEC identified the U.S. Department of Defense, which oversees the site’s operations, as the potentially responsible party for perfluorooctanesulfonic acid contamination detected in nearby groundwater supplies. DEC, in partnership with the Suffolk County Water Authority, is connecting homes on vulnerable private wells to the clean public water supply. DEC is taking aggressive action to hold the Department of the Defense accountable for a comprehensive site cleanup.

At Governor Cuomo's direction, the Department of Environmental Conservation is pursuing an immediate engineering investigation to expedite containment of the groundwater plumes contaminated with industrial solvents at the U.S. Navy and Northrop Grumman Bethpage site in Nassau County. The investigation assesses expedited cleanup options, including full containment of the plumes, in order to ensure the contamination does not threaten additional drinking water wells. These new aggressive actions are part of New York’s ongoing efforts to hold the polluters accountable and utilize state Superfund resources to address the movement of groundwater contamination.

In August 2016, Governor Cuomo announced New York's intention to fight the EPA's designation of the Eastern Long Island Sound Disposal Site. The EPA finalized the designation in December 2016 and, immediately thereafter, New York State issued a Notice of Intent to Sue under the Ocean Dumping Act. Governor Cuomo announced today that the State will file the complaint challenging the EPA's rule next month. This lawsuit will be the strongest in a series of actions taken by New York State over many years to oppose the unabated disposal of dredged material in Long Island Sound. 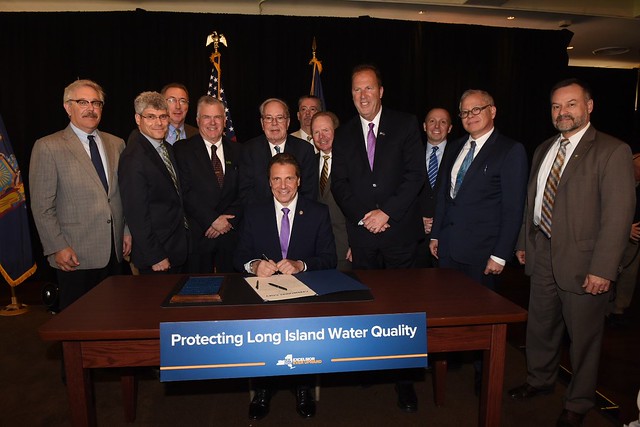 In order to further protect the groundwater resources on Long Island, the Governor has directed $6 million to study the effective management of this finite resource. The study, in partnership with the U.S. Geological Survey and Nassau and Suffolk Counties, will drill wells, analyze water chemistry, and gauge quantity. This assessment will provide new solutions for addressing critical threats like saltwater intrusion.