Program Requires Internet Service Providers to Offer an Affordable $15 per Month High-Speed Internet Plan to Low-Income Households, as Proposed in the Governor's 2021 State of the State

Governor Andrew M. Cuomo today signed legislation establishing the first-in-the-nation requirement for affordable internet for qualifying low-income families, as proposed in the 2021 State of the State. This legislation requires providers operating in New York State to offer $15/month high-speed internet to low-income families across the state. New Yorkers qualifying for this affordable internet program include households who are eligible or receiving free or reduced-price lunch, supplemental nutrition assistance program benefits, Medicaid benefits, the senior citizen or disability rent increase exemptions, or an affordability benefit from a utility. It also requires providers to report to the Public Service Commission annually on their offers and uptake. This new affordable internet program will impact seven million New Yorkers and 2.7 million households.​

"High-speed internet is essential to our everyday lives, and as we continue to reopen our state and adjust to new norms that have been shaped by the pandemic, we need to make sure every household has access to affordable internet," Governor Cuomo said. "Remote learning, remote working, and telemedicine are not going away. This program - the first of its kind in the nation - will ensure that no New Yorker will have to forego having reliable home internet service and no child's education will have to suffer due to their economic situation."

Affordability is a key issue in the fight for universal broadband, as many families cannot afford to pay for broadband service in their homes. A basic high-speed internet plan, on average, costs more than $50 per month. Nationwide, 43% of those earning less than $30,000 are not connected to internet at home, and 26% of those making $30,000 to $50,000 remain unconnected at home. It closes to 8% unconnected for those making $75,000 or more. Meanwhile, nationwide only 66 percent of Black households, 61 percent of Hispanic households, and 53 percent of Native Americans living on tribal lands are connected to internet at home, compared to 79 percent of White households.

To further bridge the internet gap in New York, the State has partnered with Schmidt Futures and the Ford Foundation to launch ConnectED NY, an emergency fund to provide approximately 50,000 students in economically disadvantaged school districts with free internet access through June 2022.

High-speed internet is essential to our everyday lives, and as we continue to reopen our state and adjust to new norms that have been shaped by the pandemic, we need to make sure every household has access to affordable internet,

In addition, Governor Cuomo launched the Affordable Broadband Portal to help New Yorkers find the affordable broadband programs in their area. This website also includes critical information about the FCC's Emergency Broadband Benefit Program ($50/month subsidy for broadband service, plus a one-time discount of up to $100 on computers and tablets).

Furthermore, New York State will conduct an in-depth statewide mapping study of broadband to identify the availability, reliability and cost of high-speed broadband services and report on its findings within one year. This study will map the quality -- not just the availability -- of coverage. This is part of the State's effort to make broadband accessible and affordable for all. 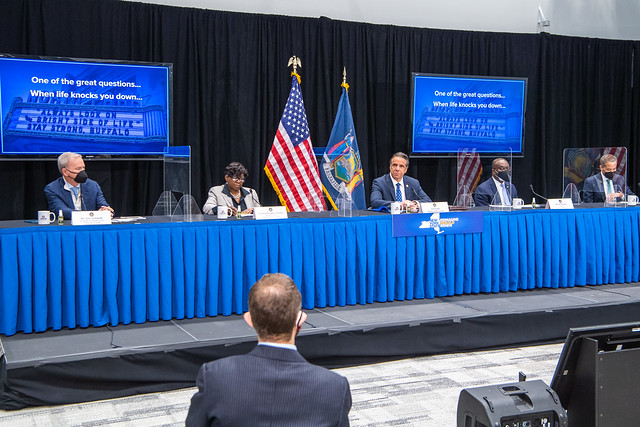 The Governor's comprehensive 2021 Connectivity Agenda builds on his work leading the nation in delivering equitable internet access for all New Yorkers. In 2015, the State undertook the largest and most ambitious broadband initiative in the nation, dedicating $500 million to broaden internet access statewide. This investment, coupled with regulatory reforms, expanded the reach of broadband so today 98 percent of New York households have access to high-speed broadband with download speeds of at least 100 Mbps. Furthermore, the Governor took critical steps to tackle the digital divide in schools by signing the 2014 Smart Schools Bond Act. This Act made $2 billion available to school districts across the state for technology devices and classroom enhancements to improve school connectivity, making it possible for schools to weather today's challenges of remote learning.