Governor Andrew M. Cuomo today signed legislation to extend the period for workers and volunteers seeking lost wage and medical benefits as a result of their involvement in the September 11th rescue, recovery and clean-up operations.

"Though September 11th may feel like an eternity ago, we still feel the pain and the loss like it was yesterday, and the thousands of brave men and women who stepped up in our darkest hour are still grappling with the aftereffects,” Governor Cuomo said. “We vow to do whatever we have to do to provide these brave men and women and their families the benefits they deserve. As New Yorkers, when we are knocked down, we get up twice as strong because we have our fellow New Yorkers to raise us up. The volunteers and workers raised us up in our time of need, and we will ensure they get the resources and the support they need.” 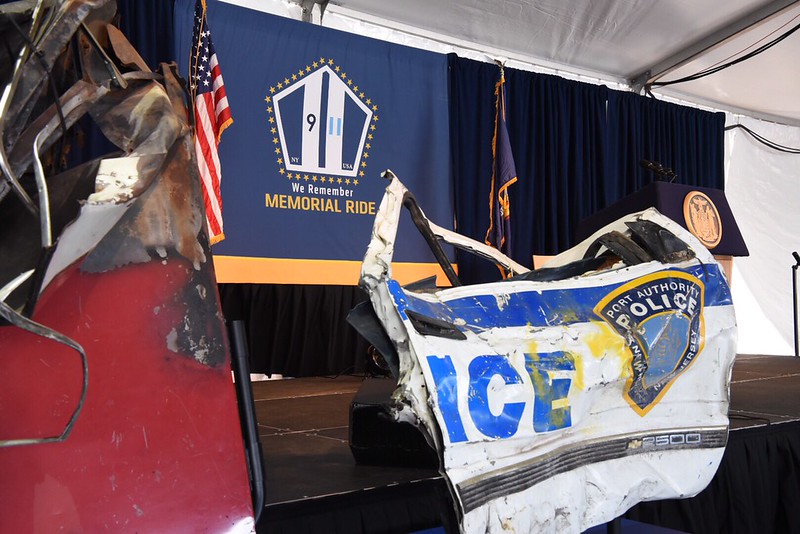 The bill (S5745-C/A7958-C) extends the deadline for individuals to register under the WTC Disability Law until September 11, 2018. The extension will allow additional individuals to receive workers’ compensation, disability, and accidental death benefits as a result of their participation in the WTC rescue, recovery, and clean-up operations.

Senate Majority Leader John J. Flanagan said, "Approval of this legislation signals our continued commitment to the men and women who selflessly and courageously put the needs of others ahead of themselves in the immediate aftermath of the 9/11 terrorist attacks. I commend Senator Golden for his strong leadership in getting this bill through the Legislature and signed into law, and thank the Governor and our partners in the Assembly for standing with us on such an important bipartisan issue. New York will not soon forget the light that emerged through the darkness on that fateful day, and we will never abandon the heroes of 9/11."

Assembly Speaker Carl Heastie said, "After the horrific events of 9/11 so many brave citizens stepped up and showed the world what we are made of by helping in the rescue and recovery operation. Many of those who were involved in the days and weeks after this senseless tragedy continue to develop illnesses, and we must do all we can to ensure that they are compensated for their sacrifices. The healing process continues 15 years after 9/11 and I thank my Assembly colleagues for championing this important measure that says we will never forget the hard work and bravery of all those who helped in the aftermath of one of our nation's worst tragedies."

Democratic Conference Leader Andrea Stewart-Cousins said, "This legislation was crucial for the thousands of brave men and women who sacrificed their time and health at Ground Zero to help others during the aftermath of our nation’s most horrific attacks in recent history. I commend the Governor for signing this crucial legislation. This action reaffirms his and all New Yorkers’ gratitude for the selfless acts of countless individuals who came together to help so many."

Independent Democratic Conference Leader Jeff Klein said, “We must never forget the heroes of 9/11 and this law ensures that their health needs are met. I applaud Governor Cuomo for signing this piece of legislation today."

Senator Martin J. Golden, Chairman of the State Senate Committee on Civil Service and Pensions said, "Today, as we mark the 15th Anniversary of the attacks on our Nation and the World Trade Center, we extend New York's commitment to those who so courageously responded to help in the face of danger. I thank Governor Andrew Cuomo for signing this bill into law so all 9/11 rescue and recovery workers who were diagnosed with an illness between 2012 and 2015 can file for assistance. Today, by extending the opportunity to file a Workers Compensation Claim before September 11th next year to these individuals, we have done the right thing for our heroes and their families."

Assemblyman Peter J. Abbate Jr. said, "I would like to thank Governor Cuomo for signing this bill and the 9/11 Task Force for all their hard work. Whether you were a first responder in a uniformed workforce or a volunteer at Ground Zero, this bill is a message to you that we will always take care of you and your contribution will never be forgotten."

In addition, Governor Cuomo strongly encourages all 9/11 responders to consider using the World Trade Center Health Program, administered by the National Institute for Occupational Safety and Health for both treatment and monitoring of their health. This program, also known as the Zadroga Act, was recently funded by the Federal government for 75 years. Responders are seen at the clinics by experts in the field, without charge. In addition to treating illnesses, the clinics begin monitoring the health of responders. Services are available at many Clinical Centers of Excellence in New York City, Long Island and New Jersey, as well as through a nationwide network of providers. For more information, visit www.cdc.gov/wtc.

Uniformed EMTs, Paramedics & Inspectors union at FDNY President Israel Miranda said, "Governor Cuomo has taken a major step today for our members and others who suffered devastating health problems from working at Ground Zero. Today's signing gives new hope to our members and their families that they may survive the devastating effects of 9/11. The Governor today, once again shows his tremendous knowledge and sensitivity to the issues faced by all of the heroes of the Trade Center attack."

Patrolmen's Benevolent Association President Patrick J. Lynch said, "There is no expiration date for the heroic sacrifice of the New York City police officers and other first responders and volunteers who were made ill by their service in the weeks and months following 9/11. It is critical that they receive the compensation and care they deserve, for as long as they need it. We applaud the Governor and the Legislature for extending these important benefits."

New York State AFL-CIO President Mario Cilento said, "None of us understood the extent of the dangerous conditions working men and women were exposed to during the aftermath of 9/11. Many symptoms of those illnesses are only now starting to manifest themselves. We are pleased the governor has signed this legislation so critical to the needs of the heroes who served during the rescue, recovery and cleanup operations. Now those brave New Yorkers will continue to have access to the benefits they deserve while also knowing that their government supports them."

Michael J Palladino, Detectives' Endowment Association President said‎, "The extension is appreciated and very much a necessity because first responders continue to be newly diagnosed with 9-11 related illnesses who otherwise escaped injury over the first fifteen years."