Nearly 80 Percent or More Than 940,000 Families with College-Aged Children Across New York Qualify for Tuition-Free College at SUNY and CUNY Under Governor’s Bold Plan

Governor Andrew M. Cuomo today signed legislation enacting the Excelsior Scholarship, the first-of-its-kind in the nation program to provide tuition-free college at New York’s public universities to families making up to $125,000 a year. The legislation was passed as part of the FY 2018 Budget, and was the Governor’s first proposal in his 2017 State of the State. The Budget additionally includes $8 million to provide open educational resources, including e-books, to students at SUNY and CUNY colleges to help defray the cost of textbooks. The Governor signed the legislation at LaGuardia Community College, joined by Secretary of State Hillary Clinton.

Governor Andrew M. Cuomo said, "By providing tuition-free college to thousands of middle class New Yorkers, we are restoring the promise of the American Dream for the next generation and forging a bold path forward of access and opportunity for the rest of the nation to follow. With a college education now a necessity to succeed in today's economy, I am proud to sign this first-in-the-nation legislation that will make college accessible, strengthen the middle class, and build a brighter future for all New Yorkers."

Senator Bernie Sanders said, “Every American, regardless of income, must have the right to a higher education. In a competitive global economy, with rapid changes in technology, we must make public colleges and universities tuition-free. I congratulate Governor Cuomo and New York State for helping to lead the nation in that direction."

Secretary of State Hillary Clinton said, "New York State has long been a pioneer in education. Taking this next step to make college tuition-free for hardworking families is the right thing to do, and the smart thing to do. I was proud to put this plan forward during my campaign, and I'm thrilled that it's become a reality in New York. I hope students, families, and educators across our country will continue to speak out on this issue, and call on more states to follow suit."

Under the Excelsior Scholarship, nearly 80 percent, or 940,000 middle-class families and individuals making up to $125,000 per year, qualify to attend college tuition-free at all CUNY and SUNY two- and four-year colleges in New York State.

The new program will be phased in over three years, beginning for New Yorkers making up to $100,000 annually in the fall of 2017, increasing to $110,000 in 2018, and reaching $125,000 in 2019. Scholars must be enrolled in college full-time and average 30 credits per year (including Summer and January semesters) in order to receive the funding. The program, however, includes built in flexibility so that any student facing hardship is able to pause and restart the program, or take fewer credits one semester than another.

"New York State has long been a pioneer in education...I was proud to put this plan forward during my campaign, and I'm thrilled that it's become a reality in New York." 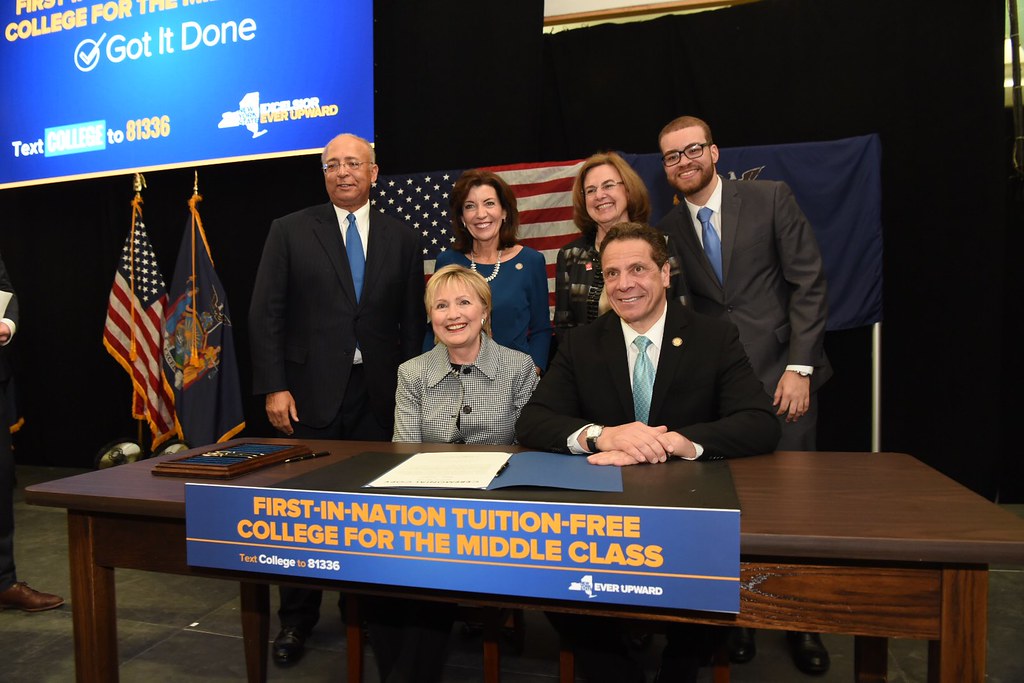 Students are required to maintain a grade point average necessary for the successful completion of their coursework, and, as the program makes a major investment in the state’s greatest asset – our young people – scholars will be required to live and work in-state for the same number of years after graduation as they received the scholarship while in school. 84 percent of SUNY and CUNY students remain in New York after graduation.

The Budget provides a record $7.5 billion in total support for higher education, a $448 million, or 6.3 percent, increase over last year. These initiatives build on the Governor’s commitment to making college affordable for all students in the Empire State, including the nation-leading 'Get On Your Feet' Loan Forgiveness Program, which allows eligible college graduates living in New York to pay nothing on their student loans for the first two years out of school.

“Every American, regardless of income, must have the right to a higher education...I congratulate Governor Cuomo and New York State for helping to lead the nation in that direction."

By 2024, 3.5 million jobs in New York State will require an associate’s degree or higher – roughly 420,000 more jobs than in 2014. The Excelsior Scholarship will equip students with the skills they need to succeed, and ensure they are able to secure the high-tech, high-paying jobs of tomorrow.

SIGN UP to receive information on the Excelsior Scholarship