Governor Andrew M. Cuomo today signed into law the Gender Expression Non-Discrimination Act and legislation banning the practice of conversion therapy, signifying a landmark victory for the LGBTQ community and fulfilling the Governor's vow to sign this legislation within the first 100 days of the legislative session.

"As the most progressive state in the nation and as the home of the modern LGBTQ rights movement, New York has always been on the front lines fighting for full protections for every individual," Governor Cuomo said. "By signing into law GENDA and a ban on the fraudulent practice of conversion therapy, we are taking another giant step forward in advancing equal justice for every New Yorker - regardless of their gender identity or sexual orientation. We are once again sending a clear and proud message that there is no place for hate in our state, and anyone who engages in bigotry and discrimination will be held accountable."

"No person should face discrimination or violence because of their gender identity, especially in the state that is the birthplace of the LGBTQ rights movement," said Lieutenant Governor Kathy Hochul. "The Gender Expression Non-Discrimination Act will finally provide protections within our laws to secure equal rights for transgender, gender nonconforming, and non-binary New Yorkers. We proudly celebrate our diversity that makes us the Empire State. With GENDA and legislation banning conversion therapy now state law, we are one step closer to ensuring justice and equality for all."

In 2015, the Governor enacted regulations that protected all transgender individuals under the State's Human Rights Law, confirming to and all public and private employers, housing providers, businesses, creditors and others that discrimination against transgender individuals is unlawful and those who do not follow the law will be held accountable in New York State.

Mental health professionals have long recognized that therapies intended to change one's sexual orientation pose a health risk to the individual. The legislation signed today bans the practice of conversion therapy by expanding the definition of professional misconduct for professions licensed under the education law to include engaging in conversion therapy with a patient under the age of eighteen years.

In 2016, Governor Cuomo announced multi-agency regulations to ban the practice of conversion therapy on minors. At the Governor's direction, the Department of Financial Services issued regulations preventing insurers from providing coverage for conversion therapy for individuals under the age of 18, the Department of Health prohibited coverage of the practice under New York's Medicaid program, and the Office of Mental Health restricted facilities under its jurisdiction from using the treatment on minors.

As the most progressive state in the nation and as the home of the modern LGBTQ rights movement, New York has always been on the front lines fighting for full protections for every individual.

"The passage of GENDA and the ban on conversion therapy practices are major steps forward for the LGBTQ community, and signal that New York State is ready to be a true progressive leader that supports and affirms transgender, gender nonconforming and nonbinary New Yorkers as well as our youth," said Glennda Testone, Executive Director of NYC's LGBT Community Center. "We celebrate these long-overdue wins, Governor Cuomo's commitment to making them a reality and the tireless activism from all who refused to give up on making New York a more inclusive state despite seemingly insurmountable boundaries. These victories show what we can do when we come together in support of one another, and what's possible for the road ahead."

Senate Majority Leader Andrea Stewart-Cousins said, "One of my proudest moments as a Senator was when we passed the Marriage Equality Act. But that was eight years ago now, and since then the former Senate Republican Majority refused to pass any real protections for the LGBTQ community. Now, under the Democratic Majority, this Senate chamber is affirming that we stand with our LGBTQ community. I commend Senator Hoylman for his leadership on these bills and this important issue and I thank my partners in government, Speaker Heastie and Governor Cuomo, for moving to have these bills become law so swiftly. I am proud that the Senate Majority has passed these historic bills, and we will continue to move ahead with our ambitious, progressive agenda."

Assembly Speaker Carl Heastie said, "For years, the Assembly Majority has passed GENDA and legislation to ban conversion therapy because we know every New Yorker deserves to be treated with dignity and respect. With our new democratic partners in the State Senate, we are extremely grateful that these important measures will now become law. I would also like to give special thanks to Assemblymembers Dick Gottfried and Deborah Glick as well as the many members of the Assembly Majority for their tireless dedication to these critical issues."

Assembly Member Deborah J. Glick said, "It is a great triumph to the see these two pivotal bills be signed today. GENDA will ensure that New York State's civil rights and hate crimes laws include protections for the transgender and gender non-conforming communities that have seen so much discrimination in America over the years. Additionally, the ban on so-called Conversion Therapy will outlaw the much-discredited practice of subjecting minors to the destructive process of trying to change their immutable sexuality or gender expression in this state. The New York State Legislature and the Governor have achieved a clear objective in bringing justice to the many New Yorkers who have been harmed by a lack of these protections and will ensure that generations to come are protected. I am so pleased to see these bills, which many advocates and my colleagues and I have worked for years to pass, be finally signed into law."

Senator Brad Hoylman said, "It's a new day in Albany. After eight years of the Senate blocking any LGBTQ-specific legislation, today Governor Cuomo signs into law two landmark bills to protect the rights of transgender and gender non-conforming New Yorkers and prevent our kids from being subject to the barbaric practice of so-called 'conversion therapy.' As the Trump administration continues to roll back protections for LGBTQ Americans, today's victory sends a strong message to LGBTQ people across the State of New York: your civil rights protections have the full force and effect of law. I'm deeply grateful to Governor Andrew Cuomo for his historic and steadfast support of LGBTQ New Yorkers and proud to be part of a Democratic Majority that works with the Governor to safeguard the rights of all New Yorkers under the leadership of Andrea Stewart-Cousins. I'm also sincerely thankful to my colleagues in the Assembly, Deborah Glick and Richard Gottfried, for their persistence and determination over the years, as well as Senator Michael Gianaris and former Senators Tom Duane and Daniel Squadron."

Assembly Member Richard N. Gottfried, the original Assembly introducer and sponsor of GENDA, said, "Today is an historic day. Governor Cuomo took strong action in 2015 when he issued statewide regulations under the State's Human Rights Law that prohibited discrimination on the basis of gender identity and transgender status. But adding gender expression and identity to the Human Rights Law and the Penal Law will give proper recognition, protection against repeal of these regulations, and add protection under the State's Hate Crimes Law. With an administration of bullies in Washington, New York is standing up for common sense, fairness, and justice." 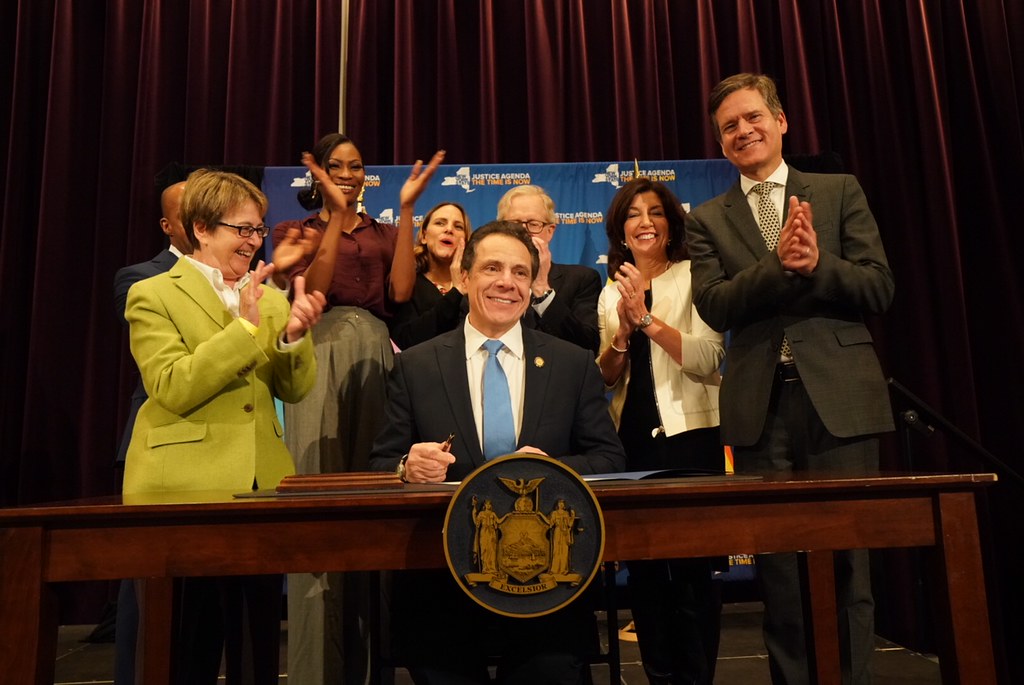 Throughout his administration, Governor Cuomo has championed LGBTQ rights and led New York as it passed groundbreaking legislation protecting LGBTQ community. In 2011, the Governor passed the historic Marriage Equality Act, creating a new national standard and sending the message that this fundamental inequality must come to an end.

Most recently, in anticipation of the potential rollback of critical Affordable Care Act provisions, Governor Cuomo directed the Department of Health to issue regulations prohibiting health care providers from discriminating against transgender patients, and directed the Department of Financial Services to issue regulations expanding anti-discrimination protections for transgender individuals when accessing health insurance. These directives were in direct response to the Trump administration's proposal to repeal a federal regulation that clarifies that the Affordable Care Act's non-discrimination protections based on sex include protections based on gender identity. By removing these protections, approximately 90,300 transgender New Yorkers would be exposed to unfair, blatant and unlawful discrimination.