Governor Cuomo: "This new law is not just a great achievement in terms of the effect on the human condition, it's also a milestone in the crusade for social justice."

"This new law is not just a great achievement in terms of the effect on the human condition, it's also a milestone in the crusade for social justice," Governor Cuomo said. "By signing this bill into law, 100,000 farmers and their families will have better lives and will finally have the same protections that other workers have enjoyed for over 80 years. This powerful and practical achievement is even more significant in the era of President Trump who continually diminishes workers' rights, attacks labor unions, disrespects the disenfranchised and has made divide and conquer, rather than unify and grow, the credo of America."

Senate Majority Leader Andrea Stewart-Cousins said, "The Farm Laborers Fair Labor Practices Act will help build a stronger and fairer agricultural industry throughout New York State. The legislation signed today will stand up for farm laborers and ensure they have the rights and protections that other New York workers have access to. I applaud Senator Jessica Ramos for championing this bill, and holding hearings and visiting farms throughout the state to better address the priorities and concerns of farm laborers and the agricultural industry."

Assembly Speaker Carl Heastie said, "For more than two decades, the Assembly Majority has fought to protect farmworkers from unfair labor practices for the physically taxing, oftentimes dangerous work they do to fuel our agricultural sector and put food on our tables. These hardworking men and women are vital to the success of New York's farms, and they deserve the same employment rights afforded to workers in other industries across the state. With this legislation, this essential workforce will finally be granted the protections they need and deserve. I would like to thank longtime sponsor of this legislation Assemblymember Cathy Nolan, Labor Chair Marcos Crespo and the many members of the Assembly Majority for their tireless commitment to seeing this legislation through to the finish line."

By signing this bill into law, 100,000 farmers and their families will have better lives and will finally have the same protections that other workers have enjoyed for over 80 years.

Senator Jessica Ramos said, "Today we are recognizing farmworkers as the backbone of New York's multi-billion dollar agricultural industry and acknowledging the dignity in their work. With the Governor's signature on this bill, we are finally granting farmworkers a day of rest, overtime pay, the right to collectively bargain, and recognizing them as workers under the Labor Law."

Assembly Member Catherine Nolan said, "Our Assembly Majority has a proud history of passing workers' rights legislation, a tradition which has continued with the passage of the Farm Laborers Fair Labor Practices Act. I am very proud to have carried this legislation for many years, and I am thankful for all the work done by so many in the effort to see this bill be signed into law. My thanks to Speaker Heastie and my colleagues, Senator Ramos and all our Senate sponsors through the years, Governor Andrew Cuomo, the RFK Center for Human Rights, the Hispanic Federation, the ACLU, the Rural & Migrant Ministries Coalition, NYSUT, RWDSU, the entire AFL-CIO, and so many individuals and community groups for their advocacy, support, and tireless work. I also want to recognize our late Governor Mario Cuomo and State Senator Olga Mendez, who, along with Denis Hughes, Ed Donnelly, Alan Lubin, Rich Winston, Rev Richard Witt and Geri Reilly introduced me to this issue. This law represents a huge victory for the farmworkers of our great state, for their families, and for everyone who fought to end the injustices that our farmworkers faced; their efforts are realized today."

Assembly Member Marcos A. Crespo said, "After decades of advocacy, we can finally deliver long overdue worker protections and rights to hardworking farmworkers in NYS. While our farms and their vitality are a crucial part of our states economy and future, it can only thrive when workers, many of them immigrants, are treated with respect, propped wages and adequate safety protections at all times. I'm grateful to Governor Cuomo, Speaker Heastie, Assemblywoman Nolan and everyone who would not rest until justice was achieved."

NYCLU Executive Director Donna Lieberman said, "The signing of this bill sets right 80 years of wrongs done by a racist, Jim Crow-era law that denied farmworkers basic rights. Farmworkers have toiled for too long in dangerous conditions, vulnerable to exploitation. The NYCLU is proud to stand today with the Governor and legislative leaders to ensure farmworkers have the right to organize, a day of rest, overtime pay, and more. These protections come at an important moment for immigrant farmworkers. As President Trump does all he can to advance his agenda of cruelty, our state is showing that all New Yorkers are worthy of respect, dignity, and rights."

Mario Cilento, President of the New York State AFL-CIO said, Today, Labor's family is whole. After a decades-long fight, the lives of tens of thousands of hardworking men and women who perform demanding and dangerous work on farms all across this state will improve with the Governor's signature. Farmworkers are finally getting basic labor rights including the right to organize a union, a mandatory day of rest, and the right to overtime pay. I thank Governor Cuomo for his leadership on this critical issue and for signing this historic bill into law, as well as the sponsors Assemblywoman Cathy Nolan and Senator Jessica Ramos for their tireless efforts. It is fitting that this bill is signed at the Daily News whose relentless editorial support has shone a light on the deplorable working conditions on New York farms. Most of all, I commend the countless farmworkers who have fought over the years for justice with incomparable perseverance and courage."

Rabbi Michael Feinberg, Executive Director of The Greater New York Labor-Religion Coalition said, "With this historic legislation, Governor Cuomo has once again reaffirmed his commitment to worker's rights. The conditions under which farm laborers work are often unacceptable and have been ignored for far too long. Farm workers will now be protected from being overworked without respite and be guaranteed safe and sanitary working conditions. Thank you to Governor Cuomo for getting this done and thanks to all the allies: faith, labor, and especially the farmworkers themselves."

Frankie Miranda, Executive Vice President of Hispanic Federation said, "Hispanic Federation commends Governor Cuomo for signing the Farm Laborers Fair Labor Practices Act into law, which will begin to dismantle the century-old policies that have unjustly exempted New York's farmworkers from the basic labor protections and rights that all other workers in our state enjoy. Although a step in the right direction, there is still work to do. Hispanic Federation will continue advocating for farmworker rights across New York State." 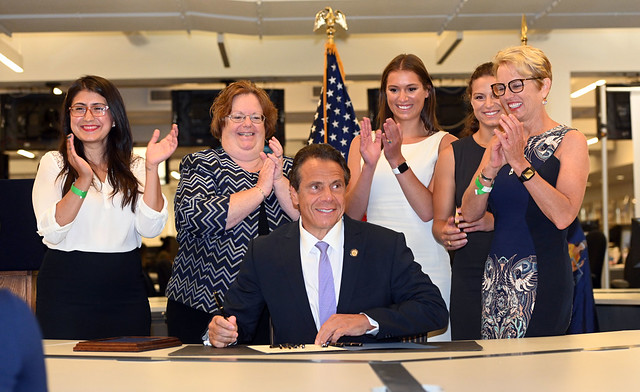 Patricia Smith, Senior Counsel, National Employment Law Project and Former NYS Labor Commissioner from 2007-2010, said, "While farm workers are the backbone of New York's massive agricultural industry, they have not been entitled to fundamental labor protections. We applaud Governor Cuomo's devotion to ensure that farm workers are treated fairly."

Reverend Richard Witt, Executive Director, Rural & Migrant Ministry said, "Governor Andrew Cuomo's unwavering commitment to the dedicated farm workers of New York State is once again demonstrated with the signing of the Farm Workers Bill. The Governor has not just expressed his appreciation for these hard working men and women, he has acted on it through this critical legislation that ensures agricultural workers receive the utmost protection and respect from our state."

Andrea Callan, Managing Director, Worker Justice Center of New York said, "With the signing of the Farmworkers Fair Labor Practices Act, Governor Cuomo has secured work protections for thousands of farmworkers across New York, one of the top agricultural states in the country. The Governor demanded that it was time to right the wrongs of labor practices rooted in a history of discrimination and give a voice to farmworkers who were previously categorically silenced. We thank him for his persistent advocacy and support for New York's farmworkers."

Crispin Hernandez, Former Dairy Farm Worker, Main Plaintiff in Hernandez vs. State of New York, and Organizer with the Workers' Center of Central New York said, "We want to thank all of our allies who have supported us in the fight to win organizing rights for farmworkers, especially Hector Figueroa, our beloved brother and president of SEIU Local 32BJ, who passed away last week. The Workers' Center for Central New York has fought for years to protect the rights of farmworkers in our state. We have the same determination to lift up farmworkers today that we had in 2013 when my coworker and I were fired from the dairy farm where we worked for organizing our colleagues and educating them about our rights. The lawsuit we filed resulted in a ruling that determined that it's unconstitutional to exclude farmworkers from state law that protects other workers from retaliation for organizing. Now that those protections will be enshrined into law through the Farm Worker Fair Labor Practices Act, we are ready to take the next step and call on our bosses to respect our right to form unions."