Governor Andrew M. Cuomo today fulfilled his promise to sign the Child Victims Act, a key component of his 2019 Justice Agenda, within the first 100 days of the new legislative session. The legislation ensures those who abuse children are held accountable criminally and civilly and that survivors of childhood sexual abuse have a path to justice. Governor Cuomo advocated for passage of the Child Victims Act last legislative session but Senate Republicans refused to bring it to the floor for a vote.

"We are here today because survivors who endured unimaginable pain came forward with great courage and sacrificed their own privacy to make change for others," Governor Cuomo said. "This bill brings justice to people who were abused, and rights the wrongs that went unacknowledged and unpunished for too long. By signing this bill, we are saying nobody is above the law, that the cloak of authority is not impenetrable, and that if you violate the law, we will find out and you will be punished and justice will be done."

"After years of unnecessary delay, the Child Victims Act is finally a reality and justice is coming for countless New Yorkers," said Lieutenant Governor Kathy Hochul. "Survivors who fought so long and hard deserve our love and admiration. With this new law, we are empowering those who have suffered unspeakable abuse and holding sexual predators accountable."

This bill will provide necessary relief to child victims of sexual abuse by amending New York's antiquated laws to ensure that perpetrators are held accountable for their actions, regardless of when the crime occurred. Under current law, child sexual abuse offenses cannot be prosecuted after five years from their occurrence and civil lawsuits for this conduct must be brought within three years from the victim's 18th birthday.

We are here today because survivors who endured unimaginable pain came forward with great courage and sacrificed their own privacy to make change for others.

Senate Majority Leader Andrea Stewart-Cousins said, "When we took up this fight for the Child Victims Act, none of us thought it was going to be this tough or take this long. Government has a responsibility to stand up for the survivors of these heinous crimes. That is why the Senate Democratic Majority has been fighting alongside survivors and advocates for years to pass the Child Victims Acts and remove the barriers that have been protecting predators. I've been proud to work with Senator Brad Hoylman, Speaker Heastie and Governor Cuomo to ensure that justice is finally being delivered." 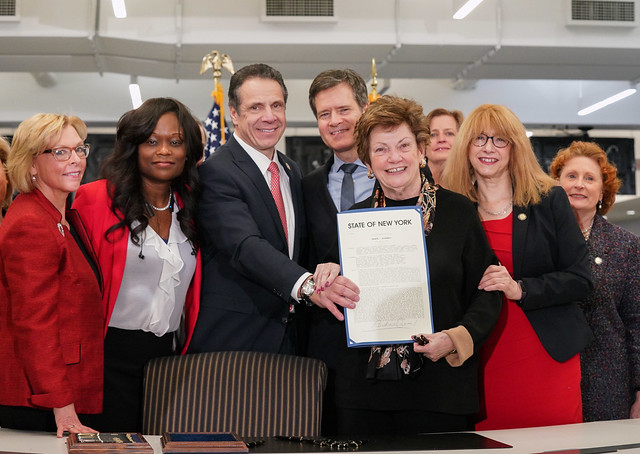 Assembly Speaker Carl Heastie said, "For years, the Assembly Majority has fought to give survivors of childhood sexual abuse their day in court. These brave individuals have waited long enough. Today, they are one step closer to justice. I want to thank the bill sponsor, Assemblymember Linda Rosenthal for her tireless advocacy and commitment to survivors. I would also like to thank my Assembly Majority colleagues and the efforts Senate Majority Leader Andrea Stewart- Cousins and her colleagues for helping to finally make this legislation the law of the land."

Senator Brad Hoylman said, "For years, survivors of child sexual abuse looked to Albany for justice and for years, their pleas went unanswered. No longer. With the Child Victims Act now signed into law by Governor Cuomo, survivors of child sexual abuse in New York State finally have the opportunity to seek justice against their abusers and the institutions who may have harbored them. I'm so proud to be in this fight alongside Governor Cuomo, who took the courageous and historic step in supporting this bill, Senate Leader and Prime Co-Sponsor Andrea Stewart-Cousins, who personally broke the decade-long logjam and moved this bill to the floor, along with the entire Senate Democratic Conference and Assemblymember Linda Rosenthal. Mostly, however, the survivors of child sexual abuse deserve credit for baring their souls and sharing their personal stories. In the process, the survivors won the hearts and minds of the members of the State Legislature and thanks to them, New York is a safer place for our children."

Assemblymember Linda B. Rosenthal said, "Today, after 13 long and hard years of fighting, we open a pathway to justice, and perhaps some modicum of healing, for survivors of childhood sexual assault. With the passage of the Child Victims Act into law, New York State sends the unequivocal and powerful message that we stand with survivors against predators, no matter how powerful. Today, we learn that not all heroes wear capes: the brave women and men who fought for years to see this bill become law have helped to make this state safer for everyone. I thank each of them for their courage and advocacy. And I thank Governor Cuomo and my colleagues in the Assembly and State Senate for their brave support of the Child Victims Act over the years."