Governor Andrew M. Cuomo today outlined New York State’s response to a positive test for Ebola in a patient at Bellevue Hospital in New York City – in order to ensure public health and safety and contain the disease. Bellevue Hospital is one of the eight hospitals statewide that Governor Cuomo specially designated earlier this month to treat Ebola patients as part of the State’s Ebola Preparedness Plan. Bellevue has been prepared and equipped for the isolation, identification and treatment of Ebola patients. As part of Governor Cuomo’s Ebola Preparedness Plan, New York State health, public safety, and transportation officials have been in engaging in an ongoing series of training exercises and drills to be ready for just such a potential Ebola case.

“As we learn about the first positive Ebola Case in New York City, I want to assure New Yorkers that we are prepared,” Governor Cuomo said. “Over the past few weeks we have undertaken a thorough and coordinated effort alongside all relevant partners, from healthcare workers to the local and federal governments, in order to implement the appropriate precautions. My thoughts and prayers go out to Dr. Spencer as well as his family and friends, and I hope for his quick recovery.”

The New York State Department of Health (NYS DOH) is working closely with the New York City Department of Health and Mental Hygiene, and the Federal Centers for Disease Control and Prevention (CDC). The patient who tested positive has been interviewed regarding their close contacts, activities, and travel. New York State, New York City and the Federal Government are also taking steps to:

At Governor Cuomo’s direction, Dr. Howard Zucker, Acting Commissioner of the NYS DOH has been onsite at Bellevue monitoring the situation. In addition, NYS DOH has sent personnel to Bellevue to monitor the use of personal protective equipment to ensure that health care workers are following protocols to protect themselves.

As part the State’s Ebola Preparedness Plan – which Governor Cuomo outlined earlier this month – New York State has been taking a series of ongoing steps to be ready for an Ebola case. New York State's Ebola plan calls for eight hospitals statewide to handle all patients diagnosed with Ebola. Those eight hospitals which are prepared and equipped for the isolation, identification, and treatment of Ebola patients, include:

Training for Health Care Workers:Earlier this week, the NYS DOH joined representatives from the Centers for Disease Control and Prevention, the Greater New York Hospital Association, 1199 SEIU and the Partnership for Quality Care for an Ebola education and training session for thousands of health care workers at the Javits Center in New York City.

Commissioner’s Order: Acting State Health Commissioner Howard Zucker has issued a Commissioner's Order to all hospitals, diagnostic and treatment centers, and ambulance services in New York State, requiring that they follow protocols for identification, isolation and medical evaluation of patients requiring care, and also mandating that all staff be trained in person in the practice of donning and removing personal protective equipment. The protocols are in place to ensure that New York's hospitals can safely care for and treat patients with Ebola. The Department of Health is also providing guidance to other healthcare professionals and facilities on the proper management of people with potential exposure to Ebola.

Additional NYS Department of Health Actions:In addition to updating protocols and hosting training exercises, the Department of Health has been hosting webinars for hospitals and EMS companies on Ebola. DOH also reiterated guidance about emergency department triage and infection control and is taking steps to be sure this guidance reaches all parts of the healthcare system, including clinics, urgent care centers, and primary care. DOH regional staff – including personnel from the Office of Public Health’s Epidemiology, Infection Control, and the Office of Primary Care and Health Systems Management – also engaged in joint visits to hospitals and other health care settings using a standard check for things like emergency department triage, care plan, PPE, and training.

Port Authority: At JFK, in coordination with personnel from the Centers for Disease Control and Prevention, Customs and Border Protection and US Coast Guard, advanced screenings commenced using detailed questionnaires for passengers originating in three West African nations. In addition, personnel from the CDC, Customs and Border Protection and the US Public Health Service had practice drills with the Port Authority Police Department and other Federal, State and local partners for scenarios in which passengers who may have been infected with the virus are handled at JFK.

Metropolitan Transportation Authority: The MTA developed a protocol to keep its employees and customers safe. This protocol includes ensuring that at-risk employees have appropriate personal protective equipment to guard against infection and are trained in its use, as well as following best practices and recommended standards when cleaning MTA facilities. This protocol was developed in close consultation with the State Department of Health regarding symptoms and likelihood of potential exposure. The MTA has been meeting with its labor unions to discuss this protocol and to make sure it is consistent and thorough in its implementation.

Public Safety: The Governor's Office of Public Safety is working with New York State Police, the New York State Chiefs and Sheriff's Associations and SUNY Chiefs to coordinate field advice for police officers regarding recommended equipment and procedures to reduce chance of contamination. 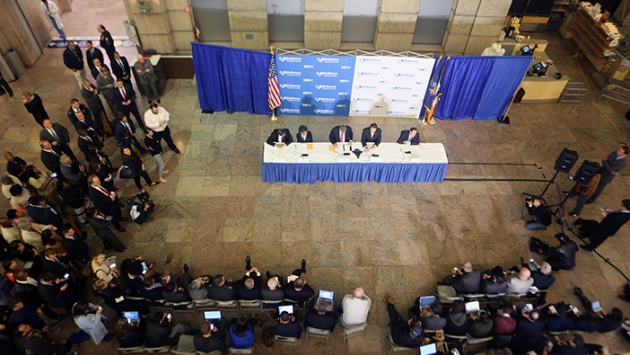 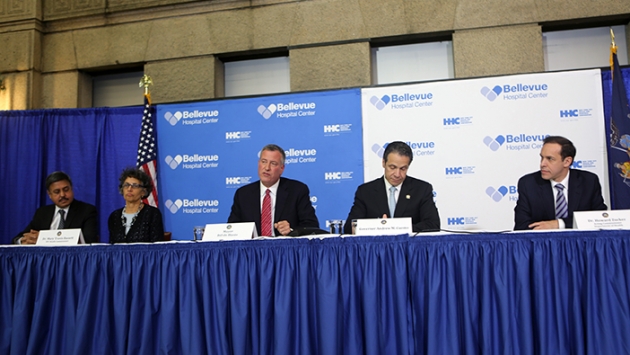 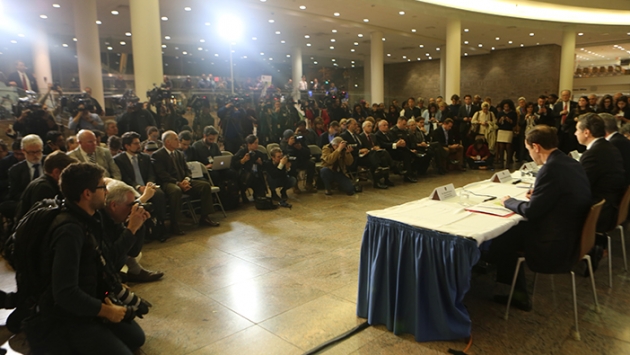