In 11th State of the State Address, Governor Advances Bold Agenda for Building the Green Economy in New York State

The State's Green Energy Program Will Create a Total of 12,400 Megawatts of Green Energy; to Power 6 Million Homes; Directly Create More Than 50,000 Jobs, and Spur $29 Billion in Private Investment All Across the State

Governor Andrew M. Cuomo today delivered his 2021 State of the State address. The Governor's 2021 agenda - Reimagine | Rebuild | Renew - features a suite of initiatives to not only begin reopening New York as the state continues its work to defeat the COVID-19 virus, but also becoming a leader and growing the green energy economy. As part of these efforts, Governor Cuomo has put forth a number of proposals focused on creating the largest offshore wind program in the nation, make New York State a global wind energy manufacturing powerhouse, and create a green energy transmission superhighway, all while creating green jobs to support communities and small businesses as we face the global threat of climate change.

Earlier this week, the Governor announced proposals to win the war against COVID-19, by addressing New York's short-term economic issues, ensure social and racial justice, and reopen the state. Proposals focused on building a new New York will be announced in the coming days.

"Our planet is in crisis. By every metric it is clear: Sea levels are rising; ice caps are shrinking. California is burning, the Arctic is melting and deserts are flooding." Governor Cuomo said. "We are proposing the largest wind programs in the nation and advancing our green manufacturing capacity and the jobs that go with it. Our new energy superhighway will be optimized by state-of-the-art battery storage facilities, so we can store renewable energy to be used when needed. These projects will not only create power but bring needed economic opportunity to struggling parts of our state, create green jobs, and make New York State a global wind energy manufacturing powerhouse."

Governor Cuomo continued, "Green energy is a pressing moral imperative and a prime economic opportunity. New York can and will be the nation's leader for renewable energy innovation and production, all while securing jobs of the future for New Yorkers. Our entire green energy program will create a total 12,400 megawatts of green energy to power 6 million homes, directly create more than 50,000 jobs, and spur $29 billion in private investment all across the state."

2021 REIMAGINE | REBUILD | RENEW HIGHLIGHTS
Largest Offshore Wind Program in the Nation: In 2021, New York will continue to build out its nation-leading green economic recovery and accelerate renewable energy development programs. The state will contract with Equinor Wind US LLC for the development of two new offshore wind farms more than 20 miles off the shore of Long Island, in what is the largest procurement of renewable energy by a state in U.S. history. Upon completion, the two offshore wind farms will yield a combined 2,490 megawatts of carbon-free energy, bring another $8.9 billion in investment, and create more than 5,200 jobs.

Once the large-scale renewable and offshore wind farms are complete, more than half of New York's electricity will come from renewable sources, putting the state ahead of schedule toward reaching its goal of 70 percent renewable energy by 2030.

The projects will leverage almost $3 of private funding for every $1 of public funding, for a combined $644 million investment in these port facilities, and will ultimately yield 2,600 short- and long-term jobs in the offshore wind industry.

New York can and will be the nation's leader for renewable energy innovation and production, all while securing jobs of the future for New Yorkers.

In 2021, New York State will construct a new green energy superhighway of 250 miles. The $2 billion project will create opportunities to maximize the use of renewable energy for the parts of the state that still rely on polluting fossil-fuel plants. Construction has already started on the New York Power Authority's 86-mile Smart Path project from Massena to Croghan, and construction will soon start on several key projects in Western New York, Mid-Hudson, and the Capital Region.

Today, New York will issue a Request for Proposals for transmission arteries to bring renewable energy from Upstate and Canada to New York City. Supercharging the new transmission superhighway will be vital to completing New York's nation-leading green economic recovery and accelerating renewable energy development programs. Current and planned investments will result in more than 1,000 jobs and $5 billion of public and private sector investment.

Public-Private Partnership to Build Nearly 100 Renewable Energy Projects: New York's clean energy transformation has accelerated rapidly over the past five years. During this period, the State has contracted for the construction of 68 new large-scale renewable energy facilities including solar farms, onshore wind farms, and three offshore wind farms that are among the largest in the nation. These investments in renewable energy have brought economic activity to 34 distinct counties, will add 6,100 megawatts of clean energy capacity to the state's infrastructure, and generate investment of more than $12 billion.

To build on this remarkable progress, New York will contract for another 24 large-scale renewable energy generation projects in 2021, to bring the State's total clean energy build-out to nearly 100 projects. The 23 solar farms and one hydroelectric facility will be the most cost-efficient clean energy construction to date in New York, producing more than 2,200 megawatts of clean power, generating more than $2.9 billion of investment and creating 3,400 jobs in 16 counties Upstate. 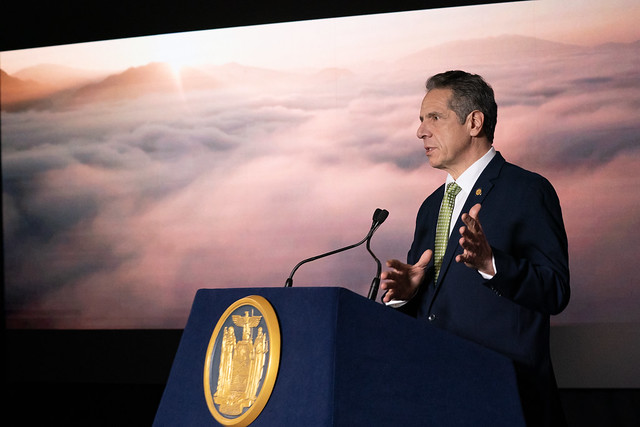 Energy Storage Projects: New York will continue to develop and deploy state-of-the-art renewable energy storage technology and facilities to generate electricity, build the capacity for storage, and help the state achieve its ambitious climate plans. To that end, the New York Power Authority has already begun construction on a large-scale, 20-megawatt battery storage project in Northern New York, one of the largest storage projects in the State's growing portfolio of almost 1,000 megawatts of contracted storage projects. These projects will help meet the electricity demands of 1.2 million New York homes using renewable energy. In addition, these projects will help continue propelling this fast-growing job sector.

Train the Green Energy Workforce: New York's accelerated renewable energy development program is creating thousands of well-paying jobs. To make sure all New Yorkers benefit directly from growth in this sector, the State is investing $20 million in a new Offshore Wind Training Institute based at SUNY Stony Brook and Farmingdale State College. The Institute will train at least 2,500 New Yorkers for good-paying jobs in wind and renewable energy. Today, the New York State Energy Research and Development Authority and the State University of New York will issue the first solicitation for advanced technology training partners to leverage our SUNY system and train the first group of workers beginning in the summer of 2021.

New York is also investing $700 million in building electrification solutions for approximately 130,000 buildings in the state, including a variety of heat pump technologies, and the training of 14,000 workers for the new heat pump markets. Approximately 25 percent of the workers trained will be from disadvantaged communities or priority populations.

Combined with our efforts in the buildings and transportation sectors, our entire green economy recovery will create 12,400 megawatts of green energy to power 6 million homes, directly create over 50,000 jobs, and spur more than $29 billion in public and private investment, while delivering to environmental justice communities and benefiting all New Yorkers by securing our carbon-free climate future.