Cuomo: "History has taught us that positive growth occurs not from fighting or even winning the war. Warfare only stops the evil. What must follow post war is the reconstruction: that is where growth occurs. 2021 will be a year of continued challenges, transformation, and change. We will need to adjust to the new social and economic realities of the post-COVID world.

"As New York told the world from day one, the choice was never between public health or economic activity. It was never either/or - it was always both. New York can and will reopen safely and smartly."

Governor Andrew M. Cuomo today delivered his 2021 State of the State address. The Governor's 2021 agenda - Reimagine | Rebuild | Renew - features a suite of initiatives to not only begin reopening New York as the state continues its work to defeat the COVID-19 virus, but also tackle critical issues facing New York and the country including jumpstarting New York's economic recovery; creating a fairer, more just state; reopening the state; becoming a leader in the growing green energy economy; and rebuilding and strengthening New York's infrastructure. In order to reopen New York, the Governor has put forth a number of proposals focused on finding creative ways to reopen New York and support businesses in a post-COVID world.

Earlier this week, the Governor announced proposals to win the war against COVID-19, by addressing New York's short-term economic issues, and ensure social and racial justice. Proposals focused on making New York a leader in the growing green energy economy and rebuilding and strengthening New York's infrastructure will be announced in the coming days.

"History has taught us that positive growth occurs not from fighting or even winning the war. Warfare only stops the evil. What must follow post war is the reconstruction: that is where growth occurs." Governor Cuomo said. "New York told the world from day one, the choice was never between public health oreconomic activity. It was never either/or - it was always both. We're laying out a comprehensive, multifaceted plan for New York's future, first by controlling the spread of COVID while ramping up our vaccination plan. At the same time, we must stabilize the state's finances and invest in a new New York infrastructure that will stimulate our economy and put people back to work while creating jobs of the future with the largest green energy plan in the country."

Governor Cuomo continued, "There was light when New Yorkers came together and defended the state from the COVID ambush and brought the state from the highest infection rate to one of the lowest. And this light illuminates a new path of possibility for our state. A path that says we can care about each other and help each other and recognize our interconnections and relationships - that we are one community and one family. That our differences are second to our commonality. That we are strong and competent and capable. That we can build, we can achieve, we can take on great challenges and we can triumph. That we believe in ourselves and we believe in each other and we believe in this place called New York. This place of possibility, this place of welcome, this place of mutuality, this place of acceptance and cooperation."

Safely Bringing Back the Arts with Pop-Up Performances and Events: New York is the cultural capital of the world. Our unique cultural assets — Broadway, museums, film, comedy, dance, and music — are fundamental to both the economy and the spirit of New York. Before the COVID-19 pandemic, the $120 billion arts and cultural sector accounted for nearly eight percent of the state's economy, and nearly 500,000 jobs. In less than a year, over two million jobs in the creative arts were lost nationally, including tens of thousands of jobs in New York.

New York State will launch a public-private partnership that will organize "pop-up" performances and arts events across the state beginning in February. More than 150 world-class artists including Amy Schumer, Chris Rock, Renée Fleming, Wynton Marsalis, and Hugh Jackman will participate, along with arts organizations such as the Ballet Hispanico, Ars Nova, the Albany Symphony Orchestra, the National Black Theatre, Pendragon Theatre in Saranac Lake, and many others supported by New York State Council on the Arts, which works with over 2,000 arts organizations across the state.

Supporting New York Artists Through the Creatives Rebuild Initiative: The State will partner with The Andrew W. Mellon Foundation to launch a Creatives Rebuild initiative. Developed in partnership with the Reimagine New York Commission, this initiative will put back to work 1,000 artists who have been impacted by the crisis and will invest in dozens of small arts organizations that make our towns and cities so dynamic. Arts have a multiplying effect on the economy. Creatives Rebuild will provide New York artists support so they can help build more vibrant communities across New York.

First-in-the-Nation Affordable Internet for All Low-Income Families: When the COVID-19 virus first came to New York and then quickly began to spread throughout our communities, students and adults alike had to adapt to remote learning and remote work to keep each other safe. Immediately, it became clear that universal broadband was a prerequisite for success in a remote world. Currently, a basic high-speed internet plan costs, on average, more than $50 a month. Governor Cuomo will propose first-in-the-nation legislation requiring internet service providers to offer an affordable $15 per month high speed internet plan to all low-income households. The State will also require providers to advertise this plan to ensure programs reach underserved populations across the State. To further bridge the gap, the State will partner with Schmidt Futures and the Ford Foundation to launch a new hardship fund to pay for internet subscriptions for our most in need students who cannot afford $15 per month during this crisis.

After nearly $500 million dollars invested to expand broadband internet to 98 percent of the state, New York will also lead the nation in making broadband affordable. Without affordable broadband, people are not only disconnected, they are disenfranchised. The Reimagine New York Commission reported to the Governor that high-quality, affordable broadband must be available to everyone and in New York we will make sure it is.

History has taught us that positive growth occurs not from fighting or even winning the war. Warfare only stops the evil. What must follow post war is the reconstruction: that is where growth occurs.

Partner with New York Businesses to Invest in Workforce Training, Expand Apprenticeships and Mentorships, and Reform Recruitment and Promotion Policies: The COVID-19 health emergency has pushed many New Yorkers out of work, with the greatest losses impacting lower and middle-income households. Equally important is the demand side of the workforce equation: Businesses must help design programs to meet skill gaps and commit to hiring workers once training is complete.

In partnership with the Governor's Reimagine New York Commission, New York is launching a Pathways Pledge among New York's leading employers, both public and private, to commit to reforming their talent recruitment, investment, and promotion policies and ensure more equitable workforces post-COVID-19. To date, 16 companies have made the pledge, affecting more than 120,000 workers in New York State. In 2021, New York State plans to triple that commitment.

Provide Scholarships to Low-Income Workers for Workforce Training Programs: While many New York community colleges, nonprofits, or business training providers offer workforce training, workers who do not qualify for current college subsidies must pay the full cost. This can be a barrier to entry into the training opportunities needed to achieve higher wages and break into growing industries.

As New York builds back better, Governor Cuomo is announcing nearly $5 million in scholarships to create more opportunities for low-income, working New Yorkers to enter the middle class. Like the successful Excelsior Scholarship which launched in 2017, this program will make high-quality credential programs free for low-income New Yorkers, empowering them to earn credentials that will lead to middle-class jobs in high-demand industries.

Governor Cuomo will expand SUNY's free Online Training Center so New Yorkers can enroll in additional employment certification programs for quality jobs in high-demand growing industries, like health care and advanced manufacturing. The Training Center will give more New Yorkers in every region of the state — from rural communities to urban centers — another opportunity to receive free job training certifications and then automatically be admitted to any one of SUNY's 30 community colleges for future career advancements. 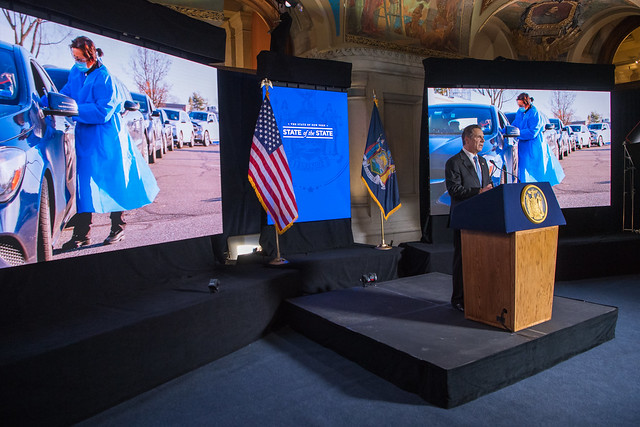 Convene a Commission on the Future of New York's Economy: Governor Cuomo will establish the Commission on the Future of New York's Economy to put forth a roadmap to address the underlying inequities exposed by the COVID-19 crisis, — including the socio-economic disparities that the crisis exacerbated — get New York back to work in jobs that pay well and continue to attract people from around the world to live and work in New York. The Commission will be composed of leading members of the nation's academic, business, labor, and civil society leaders. NYU Wagner School of Public Service Dean Sherry Glied will serve as Executive Director of this Commission.

Create a Rapid Testing Network as a Tool to Help Businesses Reopen: Over the past several months, Governor Cuomo's New York Forward reopening plan has paved the way for many businesses to resume operations safely through a phased approach and in accordance with public health protocols. While this has unleashed the ingenuity and creativity of New York businesses — such as new outdoor dining spaces and delivery options — it has also created significant financial struggles for these industries.

New York has been at the forefront of developing testing capacity throughout the COVID-19 crisis and will use that experience to help support the reopening of businesses. The State will continue to scale up the availability of testing to help businesses safely reduce capacity restrictions, as well as work with testing companies to stand up a network of convenient testing sites in city centers, starting with New York City. New York will also work with local governments to cut through any red tape to set up this critical infrastructure quickly. With this new network of rapid testing locations, a customer will be able to stop into a new rapid testing facility, get tested, and 15 minutes later be cleared for dinner or a movie. This will provide an added layer of protection and confidence as New Yorkers resume economic activity.

In addition, to help employers bring more workers back to their offices, New York is partnering with leading commercial real estate firms in New York City in which they pledge to make market-rate diagnostic COVID-19 testing available to tenants in their buildings. Major commercial operators with over 100 million square feet of commercial space in New York City have already committed to this pledge. The Department of Health will also issue best practice guidelines for office testing to support the initiative.

Creatively Repurposing Underutilized Commercial Space for Additional Housing: As the COVID-19 pandemic has unfolded, New York, like states across the country, has seen an increase in telework and a reduction in travel. New York City must, and will, remain a global commercial hub by ensuring that the City remains the paramount location for the world's most innovative and successful businesses and their employees. Reduced demand for office and hotel space has created an opportunity to repurpose formerly commercial space that has far greater potential for use as housing, including affordable and supportive housing, to create dynamic, 24/7 walk-to-work neighborhoods.