In Partnership with Northwell and BioReference, Mobile Testing Center Will Test up to 200 People Today and up to 500 People per Day in the Coming Days

In Addition to Tests at this Site, BioReference Laboratories Will Conduct 5,000 Tests per Day for New Yorkers - Five Times the State's Target Goal When Outbreak First Came to New York

Governor Andrew M. Cuomo today opened the state's first drive-through COVID-19 mobile testing center in New Rochelle. In partnership with Northwell and BioReference, the mobile testing center, which serves all parts of Westchester County, will test up to 200 people today, growing to up to 500 people per day in the coming days.

The mobile testing center is prioritizing tests for individuals that are part of the highest risk population. New Rochelle residents who would like to be tested can make an appointment by calling 888-364-3065.

"The single most important thing we can do to combat and contain the novel coronavirus is test for it, and while the federal government was caught flatfooted in the midst of this crisis, New York has stepped up to fill in the gaps and ramp up testing capacity," Governor Cuomo said. "We're partnering with Northwell and BioReference to run the state's first drive-through testing facility and ensure the highest-risk population gets the tests they need to help us contain and combat this pandemic - in an efficient, safe, smart way. As we run our own test and test more people, the number of people that we find with the virus is going to keep going up, but New Yorkers should continue to remain calm and remember that the more positive tests we find, the more we can limit the virus and reduce its spread."

This new testing facility builds on the Governor's aggressive efforts to ramp up testing capacity in New York State. While the federal government has been a bottleneck for the nation and slowed down the country's ability to initially respond to the outbreak, New York State has stepped up to fill in the gaps in testing. 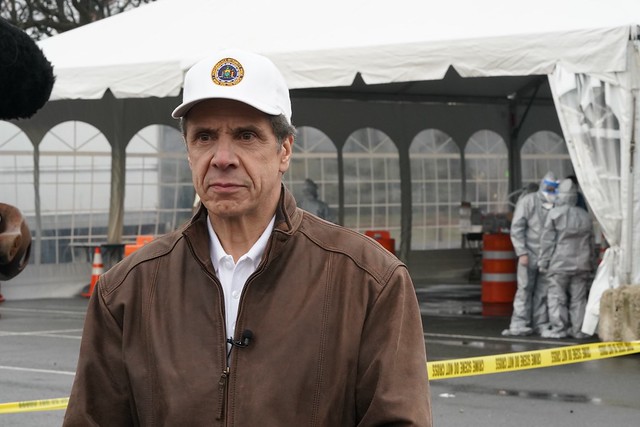 In addition to the tests being conducted at the New Rochelle Mobile Testing Center, the State is partnering with BioReference Laboratories to run an additional 5,000 tests per day - five times the state's target goal when this outbreak first came to New York. This is on top of the testing that will be conducted at the 28 public and private labs across the state and the out of state labs that New York is already contracting with.

All of this is a result of the proactive steps taken by Governor Cuomo and the Department of Health to get as many New Yorkers tested as possible.