"New York has some of the highest property taxes in the nation and people were being taxed out of their homes until we passed our historic 2 percent local property tax cap," Governor Cuomo said. "Now the federal government is taking us backwards and effectively increasing taxes on New Yorkers with its devastating cap on state and local tax deductions. We need to make the local property tax cap permanent, cut middle class taxes and fight SALT so that working people know we are on their side."

"Lowering taxes for hardworking New Yorkers continues to be a top priority for this administration, and making the tax cap permanent will help to reduce the financial burden," said Lieutenant Governor Kathy Hochul. "With the new federal tax law attacking middle-class individuals and their families, we're continuing to fight to ensure tax fairness for all."

In 2011, Governor Cuomo vowed to bring property taxes under control once and for all. After years of trying to cap property taxes, New York passed the first ever 2% property tax cap. Since the implementation of the tax cap in 2012, local property tax growth has averaged 1.9%, compared to 5.3% average growth from 2000 to 2010, and the tax cap has produced $24.4 billion in taxpayer savings statewide. The property tax cap changed long-term trends and the trajectory of the state.

New York has some of the highest property taxes in the nation and people were being taxed out of their homes until we passed our historic 2 percent local property tax cap.

As part of the campaign, the Governor remains committed to the phase-in of his historic middle class tax cuts. Under these reforms, middle class tax rates will drop to 5.5 percent and 6 percent, depending on income, when the cuts are fully phased in - an up to 20 percent cut in income tax rates for the middle class - and produce a projected $4.2 billion in annual savings for six million filers by 2025. As the new rates phase in, they will be the State's lowest middle-class tax rates in more than 70 years. 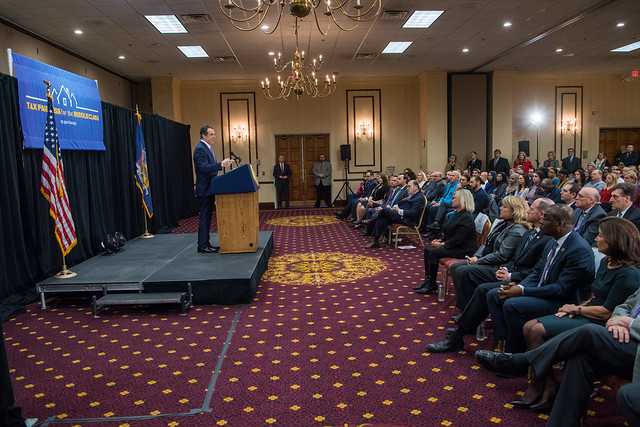 Governor Cuomo also launched a nationwide Campaign for Tax Fairness following his meeting with President Trump on the devastating impact of the elimination of full state and local tax deductibility, which disproportionately impacted New York and other predominantly Democratic states. New York has observed a decline by $2.3 billion in estimated payments of Personal Income Tax receipts in December and January. New York's revenue loss is consistent with results for the same period in similarly situated states. The Governor has called on Congress to restore full SALT deductibility and stop the disproportionate economic attack on predominately democratic states.