Governor Cuomo Launches 'No Hate in Our State' Campaign to Combat Hate, Division and Anti-Semitism in New York State

Governor Andrew M. Cuomo today launched the 'No Hate in Our State' campaign that includes a series of comprehensive proposals in the FY 2021 Budget to combat hate, division and anti-Semitism in New York State. The campaign includes passing a first-in-the-nation domestic terrorism law, investing $25 million for religious not-for-profit organizations vulnerable to hate crimes, creating an education curriculum on diversity and tolerance for students in New York and investing $2 million to support the State Police Hate Crimes Task Force. The Governor also launched a new website as part of the campaign with more information about these proposals, and encouraged New Yorkers to sign on to the campaign petition to show their support.

"The rash of anti-Semitism and hate crimes that has been spreading across our State and the country is a virus. I thought that New York would be immune from it, but I was wrong," Governor Cuomo said. "I want to make it clear that anti-Semitism has no place in New York, and this year we are going to fight this rising tide of hate with bold legislative action to deter violence, protect our citizens and educate our people about the causes and terrible consequences of hate."

To address the disturbing number of anti-Semitic and other discriminatory attacks in New York, the Governor is proposing a first-in-the-nation domestic terrorism law to include mass violence motivated by hate, creating a new A-1 class felony punishable by up to life in prison without parole. Under this proposal, mass shootings against a group of people based on their actual or perceived race, color, national origin, ancestry, gender, gender identity or expression, religion, religious practice, age, disability or sexual orientation would be punishable by up to life in prison without parole. This change would effectively treat these acts as they should: as terrorist crimes, carrying the same penalty as other terrorist crimes. The legislation was first advanced by the Governor on August 15, 2019 and was included as a key component of the Governor's 2020 State of the State and FY 2021 Executive Budget.

The FY 2021 Budget will invest an additional $25 million for religious and non-religious not-for-profit organizations that are vulnerable to hate crimes, and will expand the eligibility criteria to include houses of worship. This funding builds on the $45 million the State has already made available for these organizations to fight back against hate through the Securing Communities Against Hate Crimes Grant Program.

Education Curriculum on Diversity and Tolerance

The Governor is proposing New York schools add a curriculum that teaches civic values and the State's rich history of diversity and religious freedom. The Governor is also proposing that the Battery Park City Authority develop a plan to expand the Museum of Jewish Heritage on the Holocaust to be a learning destination for school children across the state. Additionally, the Governor is advancing legislation mandating that every New York City student visit a museum that covers topics related to the Holocaust to deepen their understanding of these historical events.

I want to make it clear that anti-Semitism has no place in New York, and this year we are going to fight this rising tide of hate with bold legislative action.

The State Police Hate Crimes Task Force was established by the Governor in the 2018 to address the increase in bias-motivated threats, harassment and violence throughout New York State. The FY 2021 budget includes $2 million to support the Task Force's on-going work, and to bolster the monitoring of digital media which promote violence, intolerance, selling of illicit substances and terrorism. Additionally, the Governor is proposing that the New York State Police partners with the NYS Division of Criminal Justice Services and the NYS Division of Human Rights to train local law enforcement agencies across the state on effective techniques for investigating hate crimes.

Malcolm Hoenlein, Vice Chairman, Conference of Presidents of Major American Jewish Organizations, said, "As the Jewish community faces an alarming surge in attacks, Governor Cuomo has shown the rest of the nation true leadership, standing up against hate and refusing to give anti-Semitism a pass. I am proud to stand with the Governor as he continues his fight against anti-Semitism and launches this new comprehensive campaign addressing security, education, and accountability to further protect the Jewish community from the threats we face."

Jack Rosen, President, American Jewish Congress, said, "As we continue to see a disturbing surge of hatred and violence against our community, Governor Cuomo has not only stood firmly in solidarity, but also taken aggressive action to protect marginalized communities and educate the next generation to end hatred once and for all. I applaud the Governor's leadership on this issue."

David M. Flaum, CEO of the Flaum Management Company, Inc., said, "The top motive behind hate crimes is to terrorize and intimidate, but we refuse to succumb to that. We applaud Governor Cuomo for his leadership to protect the safety and dignity of the Jewish community here in New York. His plan to reverse the hate epidemic is strategically multifaceted and we look forward to seeing all these proposals approved by the Legislature."

Betty Ehrenberg, Executive Director, World Jewish Congress North America said, "As we navigate these challenging times, Governor Cuomo has shown leadership for the State of New York. The significant actions he has taken to stand up against hate and divisiveness serve as an important example for how these issues are handled. We thank him for his work and will continue to stand with him against the forces working to drive us apart." 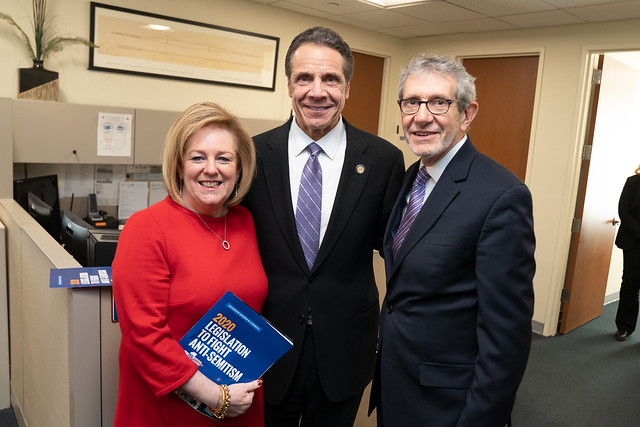 Sol Werdiger, Chairman of the Board of Trustees Agudath Israel of America, said, "As hate crimes continue to rise at a rate that we have never seen, New York has been more proactive than any other state in investigating these crimes and bringing these criminals to justice. The State Police Hate Crimes Task Force has been essential in reassuring the public that no hatemonger will get away with these despicable acts. I applaud the Governor for greatly increases this units funding so they can continue their critical work."

Eric S. Goldstein, Chief Executive Officer of UJA-Federation of New York, said, "The proposal Governor Cuomo outlined today will pave the way in the fight against anti-Semitism and all forms of hate. We are proud to partner with Governor Cuomo in his effort to ensure that all not-for-profit organizations, schools, and houses of worship have the resources they need to protect themselves and their communities. Thank you, Governor Cuomo, for your leadership and solidarity with the Jewish community."

Michael Miller, Executive Director, JCRC, said, "From marching with tens of thousands of New Yorkers across the Brooklyn Bridge, to the proposals he outlined today, Governor Cuomo has consistently stood up for the Jewish community. We are proud to stand with Governor Cuomo today as he announced his new plan to fight anti-Semitism. The comprehensive agenda includes education, enforcement, and protection, and we are eager to see it enacted."

Jonathan A. Greenblatt, CEO of the Anti-Defamation League, said, "With anti-Semitic attacks at an all-time high, we are facing an epidemic of hate-motivated violence against Jews living in the New York and New Jersey region. We are grateful for the governor's leadership and his commitment to help turn back this tsunami of hate. The proposal outlined today, with a pledge of $70 million in funding to provide security and peace of mind to Jewish and nonprofit organizations, is a substantial plan in the fight against hate."

Bruce C. Ratner, Executive Chairman, Forest City Enterprises, Inc.; Chairman of the Board, Museum of Jewish Heritage, said, "Now more than ever we must ensure that the next generation is taught the history of the Holocaust and we applaud Governor Cuomo's effort to mandate Holocaust education for NYC Public School students. The Museum of Jewish Heritage is eager to partner with Governor Cuomo in the shared fight against anti-Semitism and all forms of prejudice."

Allen Fagin, Orthodox Union Executive Vice President, said, "Governor Cuomo is leading the way toward a safer future for all communities with a series pragmatic and inspiring security proposals that will continue to make New York a leader in safeguarding all communities. Gov. Como is setting an example that we hope other states across the country will follow."

Harriet P. Schleifer, President, American Jewish Committee, said, “American Jewish Committee (AJC) proudly stands shoulder-to-shoulder with Governor Andrew Cuomo as he launches this historic campaign to combat hate in the State of New York. We applaud the Governor for attaching the highest importance to eliminating anti-Semitism and other forms of violent hate, and setting an example for other states to follow. This legislative package is designed to ensure that Jewish New Yorkers feel safer and more secure, at a time of rising antisemitism and bigotry.”