Governor Andrew M. Cuomo today launched new “GLOBAL NY”initiatives – including a $35 million Global NY Fund and trade missions to Mexico, Canada, Italy, China, and Israel – to help create new jobs in our state and attract additional international business investment to New York. Governor Cuomo outlined these new initiatives today at the first Global NY Summit on World Trade and Investment at the Jacob K. Javits Convention Center in New York City, which he had previously announced that he would convene in his 2014 State of the State Address.

“The fundamental role for government should be to develop the economy, because if the economy is running, and jobs are coming in, people have opportunity,” Governor Cuomo said. “Our work four years ago began with bringing down the cost of doing business in New York – and we did, with the lower income taxes for every single New Yorker and the lowest manufacturing tax in nearly a century. Today is about opening new markets to the State, and we will aggressively market the State, and share with the global business community that there is no better place, with no better tools and resources, than the Empire State to grow and compete.”

The new Global NY initiatives that Governor Cuomo outlined at today’s summit, include:

The Governor was joined at the Summit by, among others, John J. Mack, Economic Development Advisor to the State of New York and Special Advisor for START-UP NY and former CEO and Chairman of the Board at Morgan Stanley, Steve Hindy, CEO of Brooklyn Brewery, Tom Caulfield, Chief Executive GlobalFoundries, Dr. Alain Kaloyeros, SUNY Polytechnic Institute CEO and Officer in Charge, and Kathy Alfano, PepsiCo Senior Director for Economic Development.

John Mack, Economic Development Advisor to the State of New York and Special Advisor for START-UP NY and former CEO and Chairman of the Board at Morgan Stanley, said, “Governor Cuomo has proven an unwavering commitment to establishing and pursuing opportunities for economic development throughout New York State. Global NY will foster partnerships between New York-based companies and the international community and offer global businesses unparalleled access to New York’s world-class resources. Since the first day he took office, the Governor has pursued an innovative approach for establishing a healthy business climate, and Global NY is another successful effort to advance New York State’s economy.”

Empire State Development President and CEO Kenneth Adams said, “Today, we convened a diverse group of business leaders, prominent officials, and entrepreneurs from around the globe who all share one thing in common: an interest in the countless opportunities for investment and business in New York State. With companies already thriving and creating jobs on the heels of programs like START-UP NY, the Empire State has quickly become a top choice for companies of all kinds. Global NY will enhance our ability to attract foreign investment and make the world marketplace available to our businesses right here at home."

GLOBALFOUNDRIES, New York Chief Executive Dr. Thomas Caulfield said, “Advanced manufacturing offers the promise of economic opportunity and serves as a catalyst for significant job growth and economic expansion throughout our economy. The unique and collaborative public-private partnership between GLOBALFOUNDRIES and New York State has resulted in more than $10 billion of investment in our new Fab 8 campus in upstate New York. Our new manufacturing campus is now at the forefront of a new renaissance of American advanced manufacturing, creating thousands of high-paying, high-skilled jobs and driving the regional economy. GLOBALFOUNDRIES is proud to be part of the Global NY Summit and proud to be driving the momentum of new opportunities in advanced manufacturing here in New York State.”

Partnership for New York City President and CEO Kathryn Wylde said, “Governor Cuomo’s GLOBAL NY focus on expanding export activity is essential to ensuring New York’s future as a center of international business and finance, which is core to our mission at the Partnership.”

SUNY Polytechnic Institute CEO and Officer in Charge Dr. Alain Kaloyeros said, “Governor Cuomo has transformed New York State into the gold standard for successful 21st century innovation-driven global economies, as demonstrated by the influx of international corporations and the insourcing of jobs from all over the world. And with his START-UP NY initiative creating historic collaboration all across the state, this trend is only bound to accelerate. The Governor has already established New York as the world leader in nanotechnology research and development by enabling billions of dollars in investment from leading global technology companies. The support, incentives and infrastructure available make New York an easy choice for business and industry leaders looking for the right place to expand and invest, and we are thrilled to share our experiences with them at the Global NY Summit.”

Bak USA President Ulla Bak, “As a START-UP NY company I believe we are going to succeed thanks to the opportunity to locate in a tax-free zone, the access to New York State's tremendous resources and the talent the New York State University system offers.”

SelectUSA at the U.S. International Trade Administration Outreach Director Felicia Pullam said, “Foreign direct investment is responsible for roughly 5.6 million jobs across the United States, more than one-fifth of U.S. exports, and over $45 billion in research and development expenditures. New York’s efforts to increase FDI and exports are important for local businesses and the broader economy.”

North Country Chamber of Commerce Chamber of Commerce President Garry Douglas said, "Nothing is more important to the North Country economy than its international connections, especially with Quebec and Ontario. Foreign direct investment has created thousands of jobs across the region, including in such manufacturing sectors as transportation equipment, much of it from Canada but increasingly from places like Italy and Korea via Canada. Through Global NY, Governor Cuomo is providing us with even greater state partnership in broadening and deepening these cross border economic connections, building job creating investment, expanded exports and international tourism. Onward and upward!"

Central New York Regional Economic Development Council Co-Chair and President of CenterState CEO Robert Simpson said, “More than eighty percent of global growth over the next five years is projected to come from outside of the United States. With this comes a growing global middle class that represents the single largest market opportunity for New York businesses, large and small. We are pleased to partner with the Mohawk Valley to take advantage of this opportunity by implementing joint strategies under the Global NY initiative, making our combined regions a globally-competitive hub for business and foreign direct investment.”

Council of Great Lakes Governors Executive Director David Naftzger said, “Today's Summit was a terrific opportunity to talk about the Governor's work to promote exports. As part of its strategy, New York has created and leveraged many partnerships. Through organizations like the Council of Great Lakes Governors, Governor Cuomo and his team are working effectively with partners across the Great Lakes region to help drive economic growth and create jobs."

GLOBAL NY capitalizes on New York State’s tremendous international appeal and growing potential. In 2012, New York State’s combined service and merchandise exports to foreign markets amounted to $100.1 billion, reflecting nearly 5 percent in post-recession growth and placing the Empire State among the top three exporting states. As the gateway to the United States, New York State is the number one destination for overseas visitors and is home to the greatest number of Tier 1 research universities in the nation. New York State has the 16th largest economy in the world and ranks second in the nation in academic research and development investment. It is also home to the headquarters of 54 of the world’s Fortune 500 companies, the most among all U.S. states.

Known as the Marketplace for the World, the Javits Center hosts more than two million visitors and 35,000 exhibiting companies from around the world each year. Events at the Javits Center generate up to $1.5 billion in annual economic activity for New York State and New York City, support more than 14,000 jobs for New Yorkers a year and lead to the booking of nearly 400,000 hotel room nights a year.

Located on Manhattan's West Side stretching over six city blocks, the Javits Center has undergone a top-to-bottom renovation including new facade, flooring, lighting, mechanical and telecommunications systems, as well as the construction of the second largest green roof in the United States and a new column-free exhibition hall. The Javits Center is located across the street from the third section of the High Line and the new 7 Subway extension. 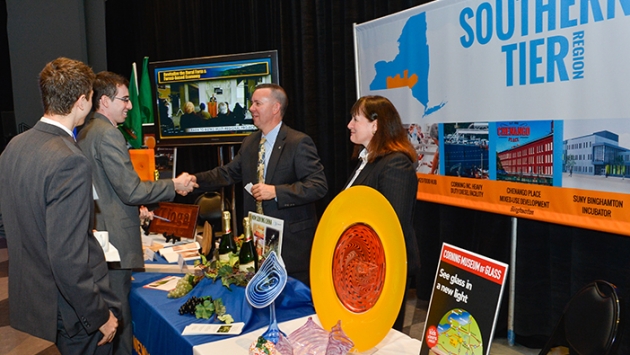 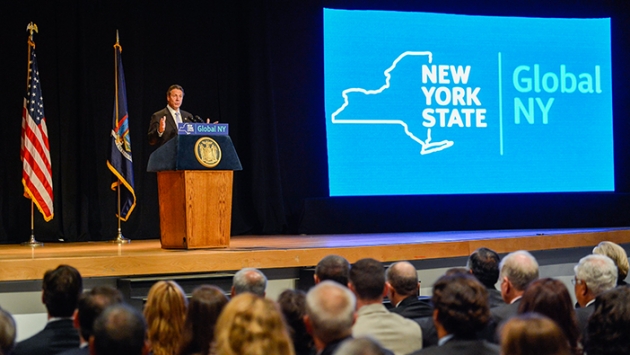 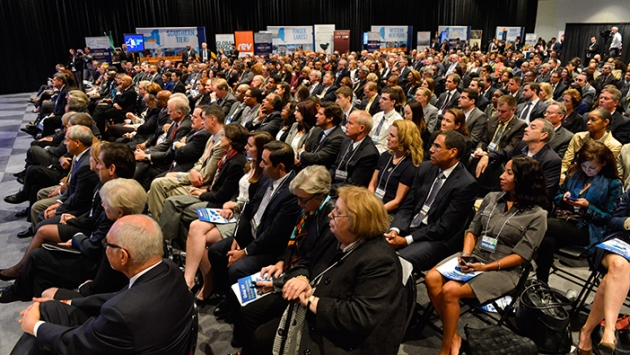 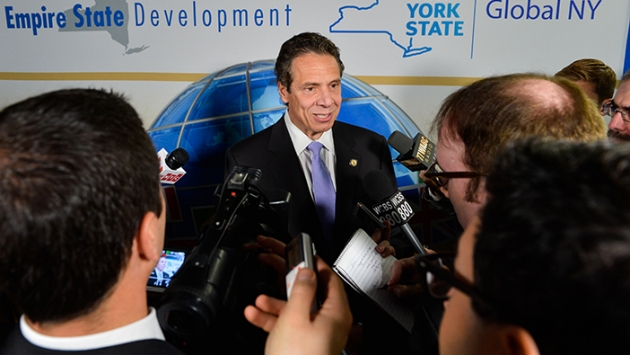