Governor Andrew M. Cuomo today announced a series of new actions to combat gang violence in Albany. The State is increasing funding for the SNUG and Gun Involved Violence Elimination initiatives, bringing this year's total investment to nearly $1.2 million for the Capital Region. At the Governor’s direction, federal and local law enforcement partners will now have expanded access to state intelligence expertise, aviation assistance and specialized equipment to better coordinate operations and leverage intelligence-based policing strategies in the fight against violent crime and drug trafficking.

"The New York State Police works aggressively and in partnership with federal and local authorities to crack down on gangs and prevent gun violence, and we will continue to do everything in our power to protect our communities," Governor Cuomo said. "By deploying additional State Police to conduct new anti-gang operations and investing new resources into our communities, we are taking bold and aggressive action to fight back against the scourge of gangs and gun violence in the Capital Region."

The Governor’s strengthened efforts will be aimed at striking at the heart of gang violence and the more than 200 gang members in the Capital Region in order to reduce shootings, street crime and drug trafficking in the city.

A partnership consisting of the Albany Police Department and the Albany County Sheriff’s, District Attorney’s and Probation offices has received an increase in funding this year through New York State’s Gun Involved Violence Elimination initiative, bringing the total award to $840,000. The GIVE initiative provides funding to support technical assistance, training, equipment, and personnel – such as prosecutors and crime analysts –to help communities reduce gun violence and save lives.

Albany is also home to one of 11 of the state’s SNUG programs. The non-profit Trinity House will receive an increase in funding this year, bringing their total award to $354,000 to administer the program. Specially trained individuals are employed reduce violence or prevent further violence from occurring when tensions arise within their community. The program also connects high-risk individuals with social services and support and also engages the community to through neighborhood events and public education activities. GIVE and SNUG funding is administered by the state Division of Criminal Justice Services.

"We are taking bold and aggressive action to fight back against the scourge of gangs and gun violence in the Capital Region."

As part of the Governor’s efforts to fight back against these violent criminals, Governor Cuomo has directed the State Police to make available any resources that could assist in not only improving coordination among law enforcement agencies, but that could strengthen or expedite ongoing investigations. This includes everything from aviation support to enhanced coordination with the Gang Intelligence Unit based in State’s Intelligence Center. The Unit collects, analyzes, and disseminates intelligence on street, prison, and outlaw motorcycle gangs and extremist/hate/transient criminal groups and the new investigator will be tasked with focusing these resources directly at Albany.

Albany residents will also begin to observe a much larger State Police presence in their communities as Troop G adds 10 more Troopers who will begin new highly visible patrols and anti-gang efforts. They will also undertake increased undercover operations, to better protect neighborhoods known to have a high level of gang activity. These efforts will not only deter crimes from occurring, but also prevent possible illegal activity. 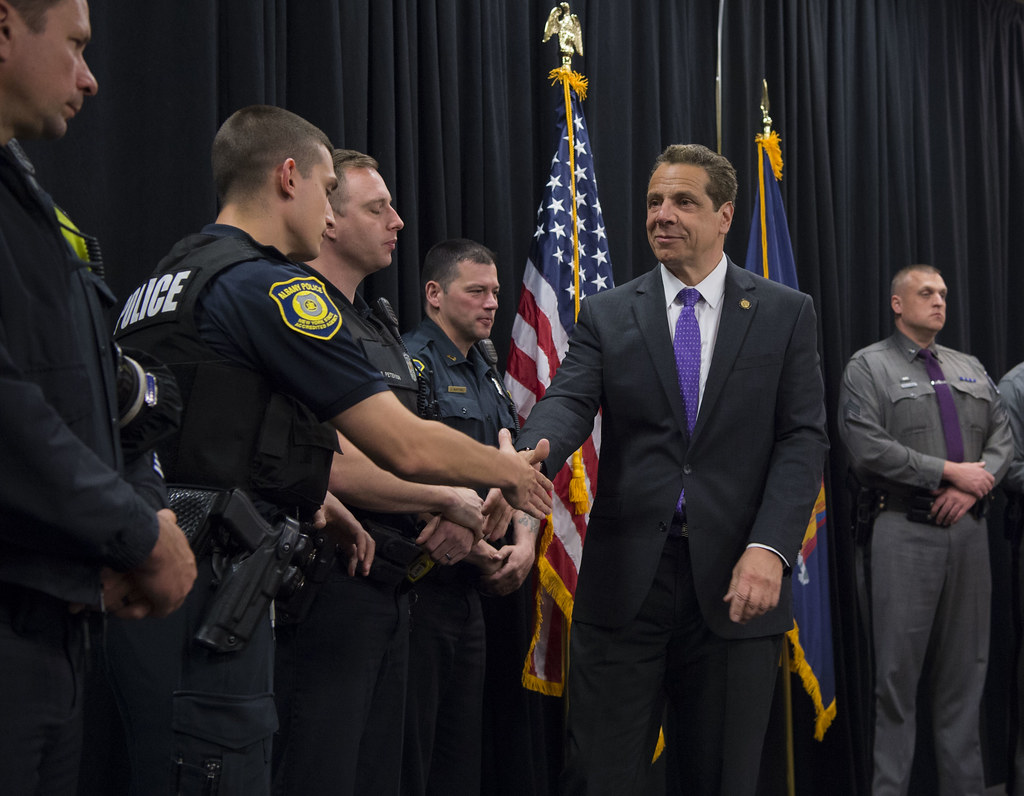 These new actions will augment the wide range of ongoing state-supported efforts to crackdown on gang and gun activity in Albany. The center is part of a network of eight state-supported centers serving 16 counties in the Capital Region, North Country, Central and Western New York, the Finger Lakes and the Southern Tier. The state partners with local law enforcement in those counties and invests approximately $6 million annually for personnel and technology at the eight centers. This allows for faster, better information and intelligence sharing across regions and between police agencies on gang cases and other criminal investigations.

Superintendent George P. Beach II said, “We are committed to assisting our law enforcement partners with the resources necessary to help fight back against the drugs and violence that are hurting Albany’s neighborhoods. This kind of close collaboration and intelligence sharing has proven to be an effective strategy in taking down organized gangs.”

New York State Division of Criminal Justice Services Executive Deputy Commissioner Michael C. Green said, “Even though New York remains the safest large state in the nation, gang violence still claims too many victims, often young people in our most challenged neighborhoods. The actions announced by Governor Cuomo today will complement DCJS’s ongoing efforts to partner with Albany and help stymie gang activity through the Crime Analysis Center network, the GIVE initiative and the SNUG program –all of which are having a positive impact.”

FBI Albany Special Agent in Charge Vadim D. Thomas said, “Gangs commit violent and ruthless crimes that pose a significant threat to public safety in many communities. Intelligence and collaboration are critical elements to tackling gang activity and the FBI is proud to continue working with our law enforcement partners to build safer neighborhoods throughout New York.”

Mayor Kathy Sheehan said, "Gang violence is a devastating plague on our community, causing heartbreak to families who lose their loved ones to horrifying violent crimes. Governor Cuomo is standing up for our community, ensuring that we have the tools and resources to fight back against this epidemic. On behalf of all Albany families and community members, I thank Governor Cuomo for taking this action to prevent more senseless loss."