Governor Andrew M. Cuomo today launched the third year of the largest artificial reef expansion in New York history as part the State's ongoing efforts to develop a stronger, more diverse marine ecosystem and provide shelter for fish and other marine life off Long Island's shores. Governor Cuomo directed the strategic deployment of recycled materials—including a rail car donated by Wells Fargo Rail Corporation (the first of a 75-car donation) and the 70-foot steel tugboat, "Jane"—to Hempstead Reef to improve New York's diverse marine life and boost Long Island's recreational and sport fishing and diving industries. Fifteen more rail cars and a steel turbine are set to be dropped to Hempstead Reef as part of the first phase of deployment.

"This expansion of the state's artificial reef program is a testament to New York's unwavering commitment to environmental preservation and restoration in the absence of federal leadership that continues to jeopardize the health of vulnerable ecosystems," Governor Cuomo said. "With this rail car and tugboat drop at Hempstead Reef, we continue to build on our efforts to energize local economies and build a healthier marine environment for future generations."

As directed by the Governor in April 2018, and with unprecedented, multi-agency coordination, recycled materials from the State Department of Transportation, New York Power Authority/Canal Corporation and the Thruway Authority, among other public and private partners, are being put to new use and helping to develop New York's artificial reef sites.

In his 2020 State of the State address, Governor Cuomo committed to doubling New York's existing reef acreage by expanding seven of 12 existing sites and creating four new artificial reefs in Long Island Sound and the Atlantic Ocean. This expansion will be complete by 2022, resulting in a stronger and more diverse marine ecosystem.

Materials used for the reef expansion are being strategically placed and include hard, durable structures such as rock and concrete.DEC overseescleaning of contaminants fromrecycled reef materials to mitigate potential impacts to sea life before being deployed to the reef sites. Materials deployed to the Hempstead Reef include 16 rail cars donated to DEC by Wells Fargo Rail Corporation, a steel turbine provided by NYPA/Canal Corporation, and the 70-foot steel tugboat, "Jane." Once materials and vessels settle to the sea floor, larger fish, such as blackfish, black sea bass, cod and summer flounder, move in to build habitats within the new structures, and encrusting organisms such as barnacles, sponges, anemones, corals, and mussels cling to and cover the material. Over time, these recycled structures create a habitat like a natural reef.

With this rail car and tugboat drop at Hempstead Reef, we continue to build on our efforts to energize local economies and build a healthier marine environment for future generations.

Materials deployed in 2018 and 2019 to Hempstead Reef were provided by DOT, NYPA/Canal Corporation, Thruway Authority, New York City DOT, and the Tutor-Perini Corporation and include:

DEC Commissioner Basil Seggos said, "While the Trump administration is actively gutting environmental initiatives, Governor Cuomo is prioritizing New York's environment, setting the standard for other states to follow. New York's marine habitats and resources provide an abundance of recreational opportunities, and with the expansion of existing reefs and the Governor's commitment to create new reefs, our state is sustaining its commitment to a healthier, more vibrant, and diverse marine environment that contributes to the economies of coastal communities. In addition, I want to thank Wells Fargo Rail Corporation for their generous and sustainable donation of rail cars to support New York's ongoing reef expansion."

Gil C. Quiniones, NYPA President and CEO said, "Governor Cuomo is once again leading the nation's efforts to ensure that our natural habitats are protected and thriving for generations to come. NYPA and the Canal Corporation are committed to expanding New York's artificial reefs so we can continue to improve our state's marine ecosystem while boosting local economies through expanded recreation and tourism."

Bill Daley, vice chairman of public affairs at Wells Fargo, said, "Climate change is one of the greatest challenges of our time, and Wells Fargo is focused on helping our communities address its foreseeable impacts. Donating our rail cars for the creation of an artificial reef off the coast of Long Island is an innovative approach that aligns with Wells Fargo's efforts to support environmental sustainability and improved biodiversity. We are proud to support this project as a smart investment in the region's environmental and economic future." 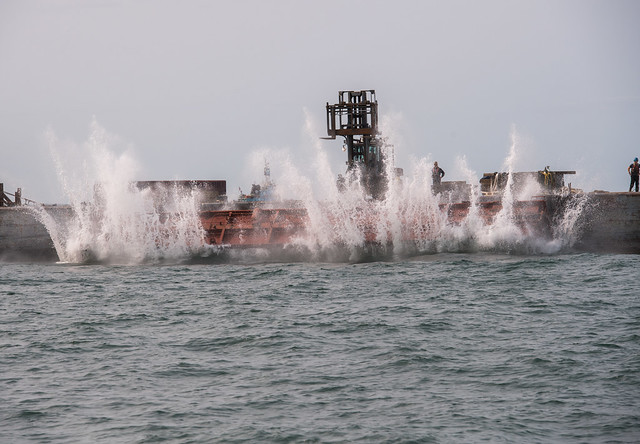 New York's marine resources are critical to the state's economy, supporting nearly 350,000 jobs and generating billions of dollars through tourism, fishing, and other industries. More than 500,000 anglers in the region will reap the benefits of the Governor's initiative, supporting the region's growing marine economy which accounts for approximately 9.7 percent of Long Island's total GDP.

Artificial reef construction is part of Governor Cuomo's NY Open for Fishing and Hunting, an effort to improve recreational activities for in-state and out-of-state sportsmen and sportswomen and to boost tourism opportunities throughout the state. For more information about DEC's Artificial Reef Program visit DEC's website.

New York's Artificial Reef Program is an example of the Governor's commitment to restoring marine ecosystems and economy. Coupled with the nation's largest offshore wind agreement, record investments in the Environmental Protection Fund and Clean Water Infrastructure Act, a ban on offshore drilling, passage of the 'bunker bill' to prohibit the use of purse seines to protect this keystone species, continued progress on the Long Island Shellfish Restoration initiative, and other programs to protect and improve water quality, the Governor's efforts are realizing a cleaner and healthier marine environment for all New Yorkers.