Governor Andrew M. Cuomo today launched the first ever statewide coding competition for SUNY and CUNY students, the "Making College Possible Coding Challenge,” as part of his Excelsior Scholarship Campaign. The challenge invites students to create a digital prototype of a mobile app or website that will provide information about the Excelsior Scholarship and share what “making college possible” means for SUNY and CUNY students.

Governor Cuomo kicked off the Excelsior Scholarship Campaign Tuesday morning at a rally at SUNY Buffalo State College. As part of the campaign, the Governor will tour SUNY and CUNY campuses in support of his plan to make college tuition free for middle-class families across New York.  Under this groundbreaking proposal, more than 940,000 middle class families and individuals making up to $125,000 per year would qualify to attend college tuition-free at all public universities in New York State.

"The cost of college has become too high, with skyrocketing tuition cost and student debt becoming an insurmountable barrier for too many students," Governor Cuomo said.  "A college education is a necessity to compete in today's economy, and the Excelsior Scholarship will ensure that college is accessible to New Yorkers across the state -- no matter their income. With our innovative coding challenge, I look forward to seeing how creative our New York students can be in sharing information with their peers about the Excelsior Scholarship, and telling us what making college possible means to them."

The “Making College Possible Coding Challenge” invites student developers and designers from all 64 SUNY and 25 CUNY campuses to build unique digital prototypes inspired by the Excelsior Scholarship around the theme “making college possible.” The prototypes can be for mobile applications or websites, and will be informational tools students and scholarship applicants can use to learn more about the scholarship and life at SUNY and CUNY.

The competition will be conducted in two rounds over the coming weeks, ending with a final judging hosted by Governor Cuomo in New York City.  In addition, SUNY Chancellor Nancy L. Zimpher announced that the university system will award its top three finishers an additional $2,000 per team as an added incentive to compete.

SUNY Chancellor Nancy L. Zimpher said, “Governor Cuomo is on precisely the right track with the Excelsior Scholarship program, as 99 percent of jobs created today require a post-secondary credential and the value of a college degree continues to climb. The State University of New York is thrilled at the prospect of making a SUNY education tuition-free for more students and their families, and I know our student submissions to the Coding Competition will reflect their enthusiasm as well.”

All teams must register by February 13th, after which an official prompt will be sent to all registered teams. The preliminary judging will take place in late February, and the top five entrants will move on to the final judging and pitch session, to take place in early March. The finalists will work with mentors from New York’s technology community and pitch their final products to a judging panel that will select one winner. The winning submission will be used to promote the Excelsior Scholarship.

To register for the challenge, and to learn more, visit the Making College Possible website.

"I look forward to seeing how creative our New York students can be in sharing information with their peers about the Excelsior Scholarship, and telling us what making college possible means to them."

Know the Facts – The Excelsior Scholarship

The Excelsior Scholarship program requires participating students to be enrolled at a SUNY or CUNY two- or four-year college full-time. The initiative will cover middle class families and individuals making up to $125,000 through a supplemental aid program. Currently 80 percent of NY households statewide make $125,000 or less with an estimated 940,000 households having college-aged children that would be eligible for the program.

The Excelsior Scholarship program is designed to provide the most students with the greatest opportunity to attend college tuition free in New York – and that goal is met most cost-effectively by partnering with SUNY and CUNY.

The Governor’s program does not treat New York’s private universities unfairly. The state has invested more than $2.4 billion in private schools since 2011, and currently provides grants to approximately 90,000 students to attend private schools. The state of New York’s investment in private colleges is greater than that of any other state besides Texas. 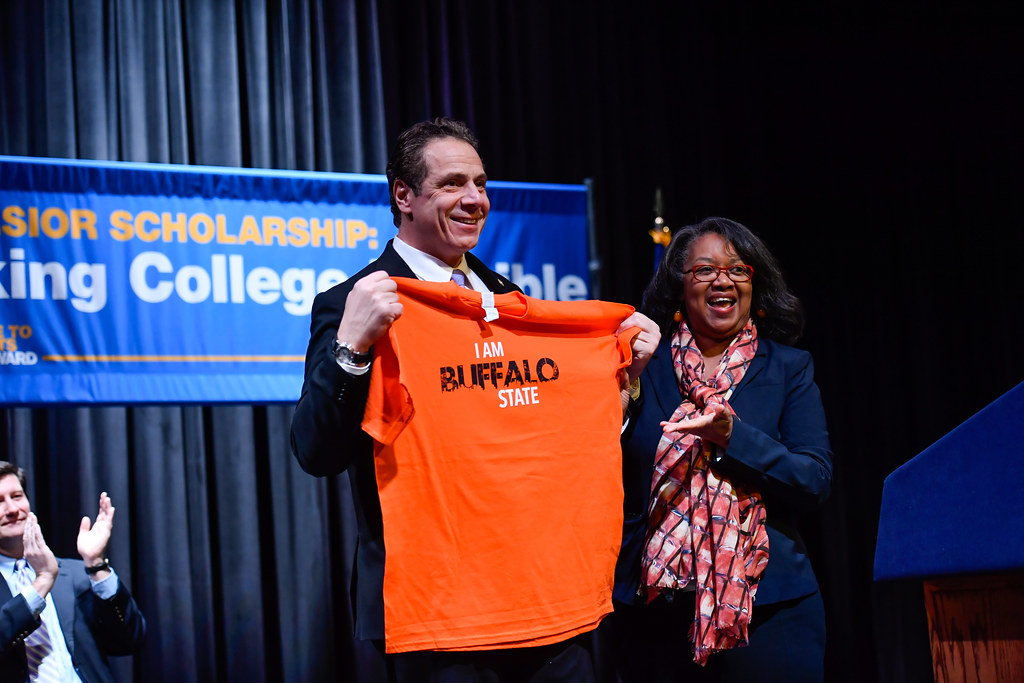 Moreover, tuition at New York’s private colleges is much higher than at public institutions – the average tuition for a private school in New York is $34,000 a year compared to roughly $6,400 at SUNY and CUNY four-year schools and $4,300 at our community colleges.

Based on enrollment projections, the plan is expected to cost approximately $163 million per year once fully phased in. While the cost estimate of the program is low, that is because it works with already existing programs to close the “last mile” of tuition costs. It combines New York’s already robust $1 billion Tuition Assistance Program with federal grant funding, and then fills in any remaining gaps.

The Governor’s program also works by incentivizing students to graduate on-time, requiring students to attend college full-time and graduate with an Associate’s Degree in two years or a Bachelor’s Degree in four years. Graduation rates at New York’s public colleges, while similar to other schools nationwide, are too low – 61 percent of four-year students and 91 percent of our two-year community college students in New York don’t complete their degrees on time.

The Excelsior scholarship aims to change that, saving students time and money by reducing their overall debt burden. The plan also recognizes there may be circumstances outside students control, which is why the proposal includes a “stepping out” provision so that students will be able to pause and restart the program if life gets in the way.

By 2024, 3.5 million jobs in New York State will require an associate’s degree or higher – roughly 420,000 more jobs than in 2014. But for too many families, the cost of college is currently out of reach. The Excelsior Scholarship will equip students with the skills they need to succeed by making an advanced degree tuition free, and ensure they are able to secure the high-tech, high-paying jobs of tomorrow.  ​ ​