Governor Andrew M. Cuomo stood with environmental leaders today to announce a campaign to pass the $3 Billion Restore Mother Nature Bond Act in the FY 2021 Budget. If ultimately approved by the voters in November, the Bond Act will fund critical environmental restoration projects in every corner of the state to ensure New York is able to withstand the threat of more intense and frequent storms fueled by climate change. The Bond Act is part of an unprecedented $33 billion commitment to fight climate change over the next five years. Governor Cuomo is also campaigning to ban single-use Styrofoam food containers and packing materials in the budget. In addition, he is pushing to renew record funding for the Environmental Protection Fund and for clean water infrastructure, as well as product stewardship initiatives to promote recycling of mattresses and carpets.

"We face a crisis for the planet and you only get one chance to fix it before reaching a point of no return. We recognize the magnitude and urgency of what we're dealing with - because if you don't save the planet, everything else is irrelevant," Governor Cuomo said. "We're going to start the most ambitious climate change program this nation has seen and part of that effort is the environmental bond act. We're going to organize to get it passed in the budget and then implement the most successful climate change and environmental restoration program in the nation. It's a bold plan but we must do it because either you face the crisis of the time or the crisis defeats you."

This past decade was the hottest ever recorded, and the five hottest years in history have all occurred since 2015. The Bond Act proposal is part of New York's $33 billion five-year plan to combat climate change. This nation-leading, first of its kind plan will transition the State to renewable power, while significantly reducing emissions in all sectors of the economy, and preparing the state and its residents to adapt to its effects.

First introduced in September 2019, the Restore Mother Nature initiative launched in Governor Cuomo's 2020 State of the State address is the nation's most comprehensive effort to restore water resources and critical habitats, and will prioritize projects to improve water quality, re-establish natural habitats and protect communities and infrastructure from flooding. As part of this effort, the Bond Act will support land acquisition to provide new and expanded recreational opportunities; protect communities from flooding; safeguard drinking water resources and aquatic habitats; advance freshwater and tidal wetland restoration to naturally filter contaminants and the nutrients that contribute to harmful algal blooms; and restore riparian buffers to protect waterbodies from nutrient runoff and sedimentation.

We recognize the magnitude and urgency of what we're dealing with - because if you don't save the planet, everything else is irrelevant.

Department of Environmental Conservation Commissioner Basil Seggos said, "Governor Cuomo is building on the State's record water quality and habitat investments that are improving our natural resources and strengthening our communities by creating the Restore Mother Nature program last year. The proposed Environmental Bond Act seeks to increase biodiversity, enhance the health of our fish and wildlife, improve water quality, preserve significant natural buffers to prevent pollution, and generate countless other benefits to ecosystems and economies in every corner of New York."

Recent storms, including Superstorm Sandy, Hurricane Irene, and Tropical Storm Lee, provided clear evidence of the need to bolster the resilience of communities against the effects of climate change and severe weather events. Since 2011, every county in New York has experienced at least two weather-related disaster declarations, and more than half have suffered five or more disasters. Federal and State governments have spent more than $26 billion responding to these disasters, and scientists estimate that flooding will cause more than $50 billion in damage in New York over the next decade. Investing in environmental restoration is essential to New York's continued economic success. The state's floodplains and forests are indispensable natural barriers that reduce risk to communities from increased flooding and more intense storms by providing a first line of defense, as well as vital habitat necessary to sustain fish and wildlife species.

New York's last environmental bond act was passed nearly a generation ago in 1996. This action will help secure funding for critical projects to protect the state's water resources and fish and wildlife habitats for current and future generations. 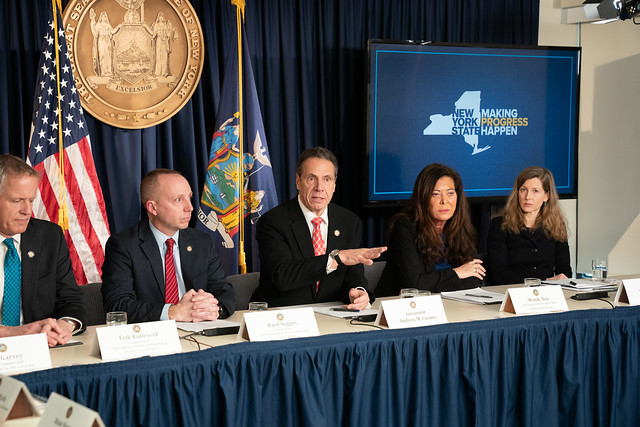 Governor Cuomo has also proposed prohibiting the distribution and use of expanded polystyrene, commonly known as Styrofoam, single-use food containers. The proposal also bans the sale of expanded polystyrene packaging materials known as packing peanuts. Additionally, the bill would authorize the State Department of Environmental Conservation to review and take action to limit or ban other packaging material upon a finding of environmental impact. This would be the strongest statewide ban in the United States and would go into effect by January 1, 2022. This ban will build on the Governor's historic effort to reduce environmental pollution statewide, including the recent ban on single-use plastic bags first announced by the Governor in his 2019 State of the State address.

Building on his climate efforts, Governor Cuomo has included legislation in his FY 2021 Executive Budget to make New York's fracking ban permanent. The measure would restrict the Department of Environmental Conservation from approving permits that would authorize an applicant to drill, deepen, plug back or convert wells that use high-volume hydraulic fracturing as a means to complete or recomplete a well, protecting the health of New Yorkers and ensuring permanently that our environment is not harmed by this practice. This bill reflects an important step forward toward achieving New York's clean energy economy goals.

In addition, Governor Cuomo has proposed continuing EPF funding for a second straight year at a record high $300 million. Appropriations include $39 million for solid waste programs, $89 million for parks and recreation, $152 million for open space programs and $20 million for the climate change mitigation and adaptation program. He has also proposed an additional $500 million for clean water infrastructure, part of the state's unprecedented $3.5 billion commitment to ensure that all New Yorkers have access to clean water.

The Governor's Executive Budget also includes two significant new initiatives to reduce environmental pollution statewide: the previously announced ban on the use of polystyrene and the creation of a new Product Stewardship Program for the recycling of two particularly difficult-to-manage products, carpets and mattresses. The new proposal places the responsibility for end-of-life management for carpets and mattresses on the producer, helping to ensure these programs consider end-of-life impacts of the product or packaging during the earliest stages of design. The initiative also incentivizes manufacturers to redesign products and packaging to be less toxic, less bulky, and lighter, as well as more recyclable.